Board of Trustees approves new global studies and impact major 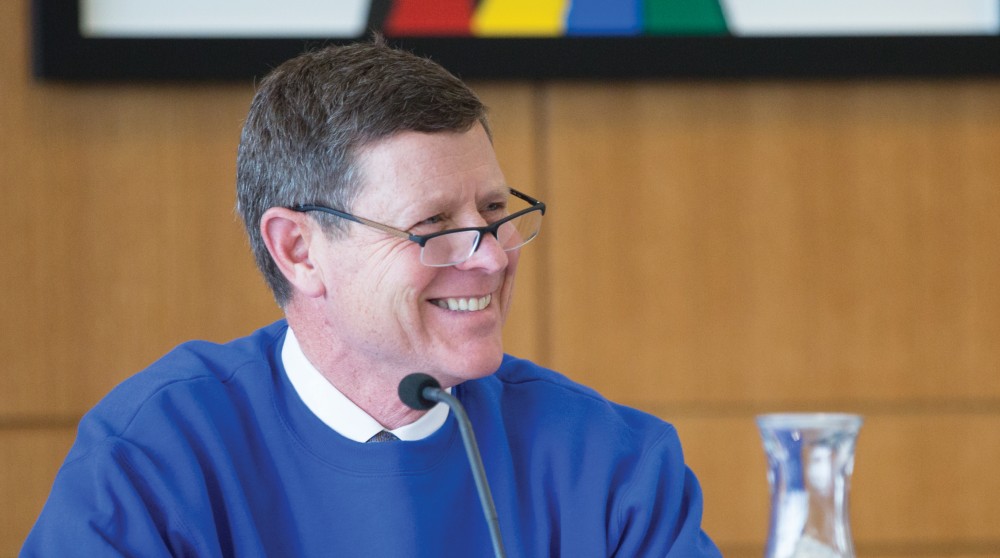 GVL / Kevin Sielaff - David Hooker speaks at the Board of Trustees meeting on Friday, Feb. 12, 2016 in the Seidman College of Business on Grand Valley's Pew Campus.

Grand Valley State University students will now be able to major in global studies and impact, housed in the Brooks College of Interdisciplinary Studies. The GVSU Board of Trustees approved the major during their meeting in April. The major comes with three new classes, two being offered in the 2016-17 school year, and the program offers both a bachelor of arts degree and a bachelor of sciences degree.

The two new three-credit courses being offered this year are: “GSI 201: (Dis)Order and (In)Justice: An Introduction to Global Studies” and “GSI/HST 202: History of Global Change and Social Transformation.” A decision has not yet been made on when the third class, “GSI 495: Capstone” will be offered.

Dean of the Brooks College, Anne Hiskes, said the new program requires “minimal new resources” and will utilize current staff and classrooms from the Brooks College to teach the two new classes. The new degree is already a part of an existing department, and does not require a new department head.

“The reason why we liked those three programs was that they were interdisciplinary, they integrated area studies programs into their curriculum, and most importantly, they all have a focus in social justice,” Fitzpatrick said.

In addition to writing the curriculum, Fitzpatrick will be teaching the GSI 201 class. The inspiration for the course title, according to Fitzpatrick, comes from her philosophy background. The course is designed to be read either as ‘disorder and injustice’ or ‘order and justice.’

Hiskes said there has been a demand for this degree program at GVSU.

“Students have shown a lot of interest, this really builds on the existing strengths of the college,” she said. “We’re taking all our expertise in the environment, the climate, about different countries, about human rights, about history and integrating that all into one program.”

“Student who graduate from the program are going to have an understanding of global issues from a variety of disciplinary perspectives,” Schendel said. “There are going to be people who can see connections across both national and disciplinary boundaries. They’re also going to be students who are able to have intercultural competence skills that they’re bring to their professions.”

So far, 26 students out of 30 have signed up for GSI: 201 for the fall semester, and the class is full for the winter semester. Fitzpatrick said she imagines the numbers would be similar for the GSI: 202 class.

“When we had them half-full before freshman orientation started, we knew there was interest,” Fitzpatrick said.

Hiskes said she hopes to get 20 majors the first year the program rolls out, and 100 students within five years.

The vote to approve the major by the Board of Trustees was 6-1, board chair David Hooker being the only dissenter. Hiskes met with Hooker to discuss reasons for his dissent, telling her his vote was aimed at the new procedure that changed the way at information was given to the board at a committee meeting prior to a vote meeting. Hooker’s vote ultimately caused the board to go back to that old process.

“It had no reflection on the program, it was basically ‘we need more time to look at things.’ It had nothing to do with that particular proposal, it was just a general procedural issue,” Hiskes said. “There was just a concern by some members of the Board of Trustees that students should get a balanced view, different perspectives, get equal treatment. We assured them that was what we always try to do in our classes.”