A game to remember 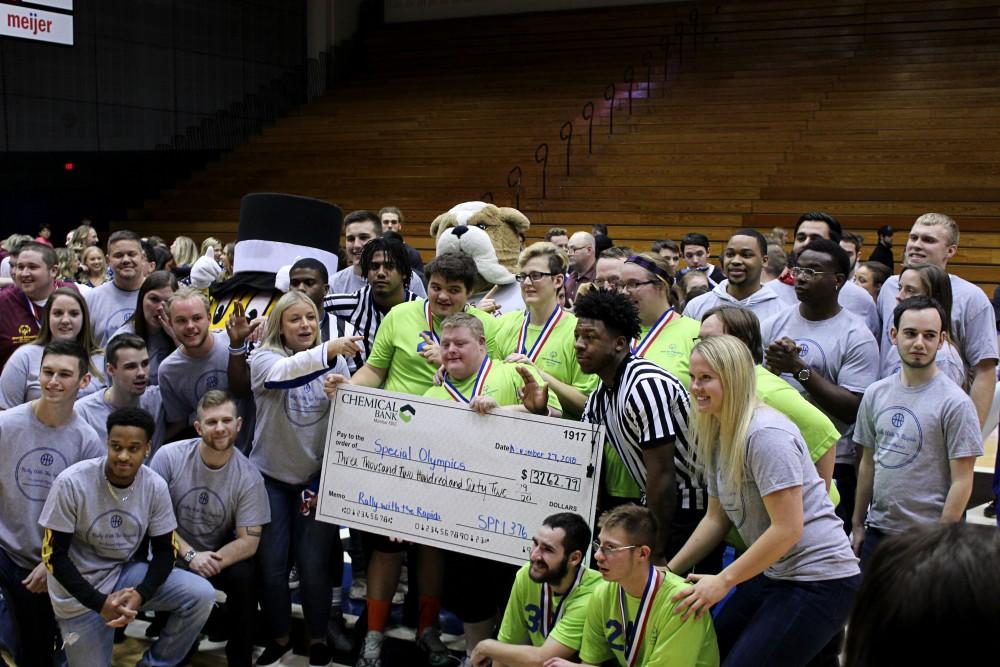 When you entered Fieldhouse Arena on Tuesday, Nov. 27, there was a buzz in the air; a certain amount of electricity that most sports fans are familiar with this time of year.

With Grand Valley State cheerleaders on one baseline and the GVSU dance team on the other, warm-up music blared over the sound system as Special Olympics basketball players from Area 5 at Ferris State and Area 12 at GVSU went through their warm up routines.

As seats were taken, the dedication ceremony commenced where athletes on both teams were highlighted; capped by a speech from Area 12 basketball player Tiffany Neely.

“Special Olympics basketball has meant everything to me,” Neely said. “Every day when I got out of school, I always had that to look forward to.”

From the opening tip, it was clear this meant a lot to the community as well. There were roars of anticipation for every shot put up and dribble move made, howls of excitement with every shot that sang the nylon song and steal snagged on defense.

The energy from the crowd never receded from the very first shot to the final buzzer.

“The players are warming up and the music’s pumping,” said Bryce Mullers, a member of the facility and event management class at GVSU that organized the event. “It feels just like a real college basketball game, and I already have the jitters.”

Looking around you could see representation from GVSU and local area students from across the entire spectrum. Not only were the dance team and cheerleaders there, GVSU and Cornerstone’s men’s and women’s basketball teams were in attendance, two of which, junior guard Chris Pearl and freshman forward Luke Hyde from GVSU, participated in a halftime dunk competition that kept the crowd buzzing until the start of the third quarter.

Members of GVSU’s Greek Life were also in attendance and helped put on the event. Sigma Pi and Alpha Sigma Alpha brought out the largest number of members from their respective fraternal and sorority communities. Alpha Tau Omega members Brendan Brown and Nico Gonzalez helped referee and organize the event as well.

“It was electric, it was a lot of fun,” said Zak Spryszak, who emceed the event. “The crowd and the community really came out and got into it, cheering for both teams and I think the athletes will go home and remember this for a life time.”

On top of the atmosphere, the players from Area 5 and Area 12 did not disappoint when play began.

As the game progressed toward halftime, FSU leaned heavily on center Kim Kenyon as he used his superior size to crash the glass and take GVSU players to the post. At halftime, the score was tied 10-10 with Kenyon accounting for eight points and six rebounds.

GVSU was not done however, as backcourt duo Tyler Kohley and Jeremy McNaughton helped the Lakers mount a furious comeback with time dwindling down in the fourth.

In a yin-yang-like effort, Kohley supplied the Lakers with a handful of key steals and a block in the fourth that allowed McNaughton to hit a pair of easy threes in transition as a part of an 8-0 run that gave the Lakers a fighting chance as the game came down to the wire.

With the game at 20-18 in favor of Ferris State with 53 seconds to go in the fourth quarter, FSU guard Rachel Young scored a key basket on a layup with 44 seconds remaining to push the deficit to 22-18.

A steal and a layup on an inbound pass with ten seconds remaining by Laker guard Eric Marlink brought the score to 22-20, but the Lakers were unable to gain possession again as the Bulldogs ran out the clock for a well deserved victory.

After the game both teams exchanged high fives and the GVSU dance and cheer team then gathered around for a medal ceremony that celebrated both teams’ accomplishments out on the court.

After the players received their medals, the students behind the organization of the event presented the teams with a donation check of $3,262.79 going toward Area 5 and 12 Special Olympics.

When asked about what allowed the event to be so successful, Professor Jon Coles, in charge of the Sports Management 376 class, gave all the credit to his students.

“Putting a smile on those athletes faces was priority number one for the class and that’s why they got an A,” Coles said. “They created an event with such heart warming energy that those special olympians will remember that for the rest of their life.”

When asked if Rally with the Rapids would be an annual event every fall semester at GVSU, Coles seemed enthusiastic that it would return.

“I hope so,” Coles said. “I’ll ask my students for feedback on the event, I hope they will be all for it, but after I get some feedback on the positives and negatives that will help me make the final decision if this will happen again (next year).”