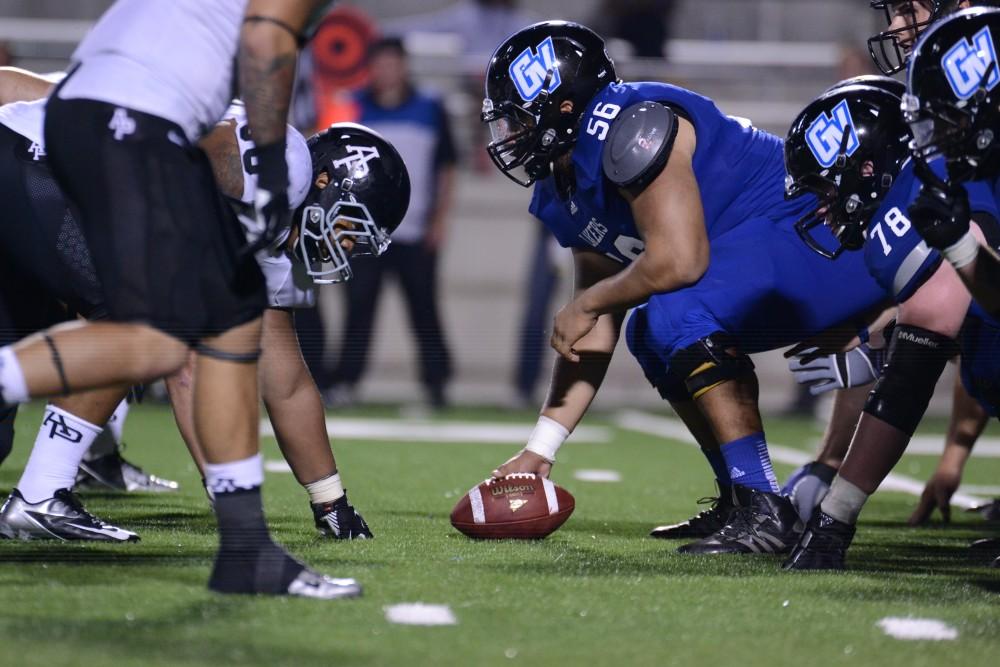 Grand Valley State University’s first NFL Combine attendee certainly appears to have more than enough grit to compete at the next level — and the resume of this cast-iron Laker anchor speaks for itself.

GVSU center Matt Armstrong labored through an ankle and shoulder injury during his senior season in Allendale, and showed an immeasurable degree of toughness in the process.

“I didn’t think I would ever have a chance honestly,” he said. “I was dealing with some injuries and I was never really focused on that. My focus was to get Grand Valley as far as they could in the playoffs, back to where we belong.”

The native of Lansing, Mich., played through the pain.

He was a key figure on a 12-3 GVSU team that not only finished its season with a trip to the semifinals, but also as the No. 3 team in the final AFCA Coaches’ Poll.

Offensive linemen are often known to have ‘all of the guts and none of the glory.’ It seems this lineman, however, finished his Laker career with plenty of both.

“The longer he played, the worse it got,” said Tim Morrison, who was Armstrong’s offensive coordinator and offensive line coach.

“He never asked to be taken out and never asked for plays off. You knew he was banged up, but he played through it.”

Armstrong’s perseverance — and ability to pulverize opposing linemen — earned him a magnitude of accolades. He was named the 2013 Rimington Award winner as the top offensive center in all of the NCAA Division II, as well as the runner-up for the Gene Upshaw award as the best interior lineman.

He was also a consensus All-American after being named a First Team All-American by the American Football Coaches’ Association, Daktronics, Inc., the Associated Press Little America Team, Don Hansen’s Football Gazette and D2Football.com.

“He’s got a rare combination of size, power and athleticism for his size,” GVSU head coach Matt Mitchell said. “Athletically, people think 40-yard dash and vertical jump, but he has great body control, great feet, and is one of the more explosive, powerful athletes we’ve ever had. He was a superior player because of all of those things.”

Armstrong (listed at 6’3”, 290) had surgery on his ankle and shoulder simultaneously after the season, and has been rehabbing at the EXOS Athletes’ Performance facility at the Andrew Institute in Pensacola, Fla., since Jan. 1.

He said he plans to participate in every drill at the combine barring any setbacks. Meanwhile, he is training and doing everything he can to take his game to another level.

He is projected as the 275th player, or No. 8 center, to be selected in the 2014 NFL Draft according to CBSSports.com and NFLDraftScout.com — or what could potentially be a seventh-round draft pick.

One of the most promising aspects of Armstrong’s draft stock is the versatility he displayed at GVSU. He was not only a two-sport athlete (track and field thrower), but also started at least one game at every position on the offensive line.

“The more uses you have, the better chance you have of being on an active roster,” Morrison said. “A perfect example is (former GVSU player) Tim Lelito, a center/guard. Matt projects in that same framework, as an inside kid that can play center and both guard positions. He’s going to allow teams to have some freedom on their roster.”

Armstrong will increase the number of former Lakers in the NFL to six if he is able to land a spot and play next season (joining Lelito, Brandon Carr, Dan Skuta, Cameron Bradfield, and Charles Johnson).

It certainly seems as if GVSU’s first-ever representative will have more than enough toughness to impress at least one team — and it only takes one team.

The combine will take place from Feb. 22 through Feb. 25 at Lucas Oil Stadium in Indianapolis, Ind.