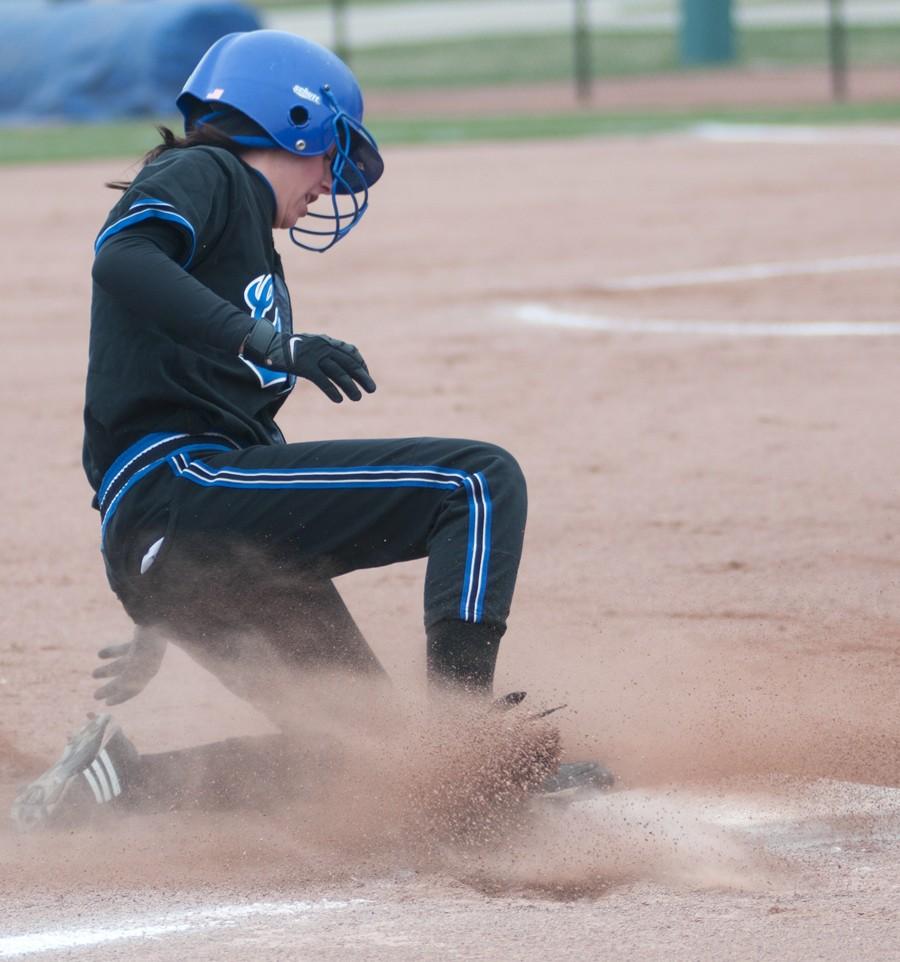 Despite cold and rainy weather, the Grand Valley State University softball team pulled out consecutive come-from-behind wins over Northwood University at home on Saturday before losing Sunday’s doubleheader to a washout.

The Lakers (21-4, 7-1 GLIAC) used a four-run sixth inning in game one and a ten-run seventh inning in game two to sweep the Timberwolves (9-9, 3-3 GLIAC) and stretch their early-season lead in the
GLIAC North to a game over Saginaw Valley State University.

“I think the comebacks speak highly of our confidence,” said GVSU head coach Doug Woods. “It shows that they can get behind and in the last innings still can have a great chance to come back- it says a lot about their hitting ability.”

That hitting ability was put on display early in the day as GVSU put up 21 runs on the day.
Led by sophomore outfielder Nellie Kosola’s three hits in the first game, the team out-slugged Northwood late and used five hits in the sixth inning to score four runs to take the lead. Coming with the success of the recent stretch of comeback wins is the confidence instilled in the younger players.

“We don’t look at ourselves as a young team. Just because we have freshmen doesn’t mean we look at them to play worse because of that,” Kosola said. “But it’s definitely is a confidence booster when we‘re all playing well together like this.”

The good vibes from game one continued in game two, a 13-5 GVSU win. The play of freshman third basemen Miranda Cleary has been a key to the sustained success of the Lakers this season. Cleary smacked her 10th home run of the season, tying her for fourth most single-season home runs all-time at GVSU. She is also the youngest player to reach double digits.

“We need the run production because we are giving up a few on defense, so it’s awful important,” said Woods. “To get that great run production from a freshman can really keep you in ballgames.”
Along with the big-play ability of Cleary, the Lakers’ success on Saturday can be attributed to the small-ball play of sophomore Jackie Teutsch and Kosola. The one and nine hitters in the order, the duo combined for 11 hits during the twin bill- five of which came off the bat of Teutsch in game two.

Teutsch’s five-hit game was the first for GVSU since 2005 and all five of the hits were infield singles or bunts. The team has been carried by their power hitters, but the importance of
small-ball offense is important, Teutsch said.

“Obviously, having someone on base when you hit a home run helps, but the girls that play small ball do help a big hitter when they come up,” the outfielder said. “As a hitter, you can sometimes see if the defense is playing farther back, but you have to try to read them to see what you can do for bunting.”

Sunday’s games were rained out, but the team’s success on Saturday was just another step in the their chase for a conference title. The Lakers will travel next to Hillsdale on Wednesday.