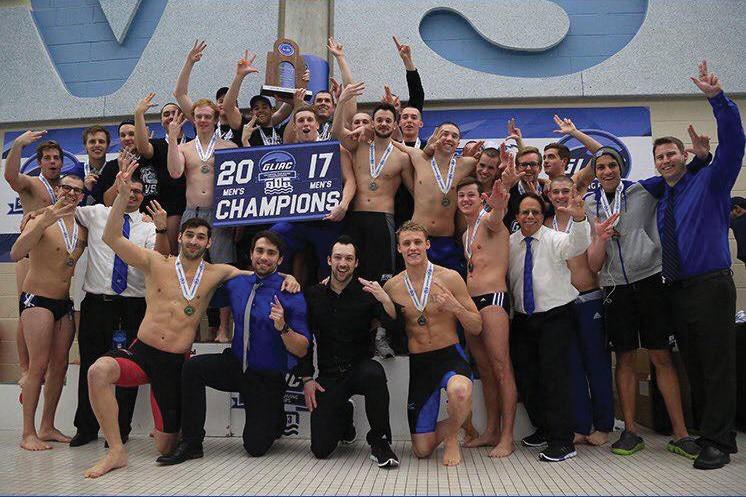 After ending an exciting 2016 season, placing first in the GLIAC Swim and Dive Championship meet last year, the Grand Valley State men’s swimming and diving team came into the national meet with more confidence than ever before.

The men’s team managed to place fifth in the meet as their season officially came to an end. The hard work didn’t stop there, as team members like Marius Mikalauskas found time to continue swimming in meets, working diligently in preparation for next season.

“We have a couple (of swimmers) that went to their home countries and swam in their national championships and did really well,” said Andy Boyce, GVSU’s men’s swimming and diving head coach. “Marius Mikalauskas was Lithuanian National Champ in the 200 breaststroke this summer, so that was a nice thing for him, but so far it sounds like they’ve worked pretty hard and they’re ready to go.”

Not only are the Lakers getting ready for another season, but the team has also recruited 21 incoming freshmen, allowing the team to become more diverse skill-wise.

“Our team’s a little bigger this year than what they were last year,” Boyce said. “We have some real young talent on the team and (are) excited to see how they are working to our training program and how they can help in the dual meets and in the championship meets as well.”

GVSU swimmers Jared Gregory and Joe Gucwa have both spent all four years on the GVSU swimming and diving team. The two are regarded as some of GVSU’s best divers, as they were rewarded for their leadership with the title of being the team’s current diving captains.

Being on the team as long as these two have has created experiences for both Gregory and Gucwa, similar to what every freshman goes through. Becoming captains of the team has pushed them to have bigger roles in the development of the rest of the team members’ careers academically and athletically at GVSU.

“Just helping them through and keeping them focused in class and in the pool, being able to balance time management, and be there for them to talk to as a support system and to push them,” Gregory said.

For Gucwa, he feels the pressure to perform better than last season. There is a lot of new talent transitioning on the team, and it is pushing this captain to achieve more for the young crew.

“We have a really good incoming class for freshmen divers, so it’s really going to push me to step up my game,” Gucwa said. “Also, just to help them improve as much as they can. It’s about knowing whether to help them or push them when they need it.”

According to Boyce, the team prefers the competition and thrill of racing. Luckily for them, the team’s schedule is packed with a variety of different events. The Lakers will be faced with big challenges this season.

During a trip to Florida to work on training, the Lakers expect to have their first-ever meets against Division II teams they wouldn’t regularly see. They are also expecting to have trips that include meets against some of the top 10 teams that were competing in the National Championship last year.

The Lakers should anticipate a busy season, but not one they cannot handle. GVSU swimming fans should look forward to another successful meet at the GLIAC Swim and Dive Championship.

“I’m super excited just to finish out and just see what the underclassmen can actually do and hopefully propel them in a direction that will keep our streak going in conference,” Gregory said.

The Laker men’s swimming and diving team starts the beginning of its new season Saturday, Oct. 14, against Wisconsin Milwaukee.