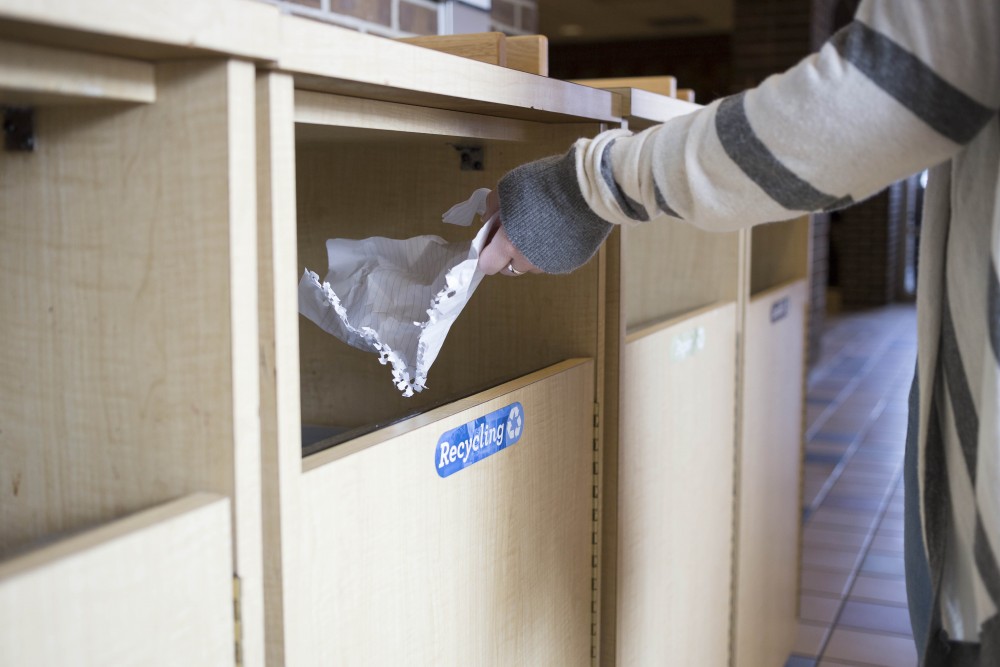 Every year, Grand Valley State University participates in the Recyclemania Tournament. This year, the eight-week competition between universities in the U.S. and Canada will start Sunday, Feb. 5.

Participating universities have the task of reporting the weight of their recyclables and also the weight of other materials. The schools are then ranked based on how well they do. Last year, GVSU took 47th place nationally in the grand champion category and took first place in Michigan for the composting category.

Janet Aubil, the operations supervisor at Facilities Services and the coordinator for recycling at GVSU, hopes as many students as possible will help GVSU reach even higher marks this year.

“We want people to change their ways,” Aubil said. “People will (recycle) when told to, but our goal is for people to make it a habit.”

Aubil has been at GVSU since 2009 and continues working to improve peoples’ recycling habits. She said GVSU aims to reach the 40 to 50 percent mark for a yearly waste recycling average. Under 40 percent wouldn’t just be disappointing, but would also bad for the environment, Aubil said.

Any student can get involved with recycling when they’re finished with a meal or have used up the contents of a plastic bottle, for example. One GVSU student, Steven Reame, is an avid recycler and encourages other students to recycle as well.

“Once you get into recycling every day, it becomes natural,” Reame said. “It’s such a small thing anyone can do, and it helps our world so much.”

There are other events going on during Recyclemania, as well, such as a game-day basketball challenge, an electronics recovery competition and a “Race to Zero Waste” building competition.

The basketball challenge will be an event during which schools will have to track the recycling and compost weights for a single basketball home game. Then, schools will be ranked into two categories based on the total amount of recycling and percentage of recycling to trash. The data will be presented after all of the schools turn in their information at the end of Recyclemania. At the end of April, a champion will be chosen for the event, along with other school rankings.

Aubil said the main way GVSU community members can help is by being aware of what they’re throwing in the trash. She encourages students to check the container they’re using and make sure it ends up in the right place. Two big areas of focus for the GVSU recycling program are food services and the dining halls. Aubil said high traffic areas like Panda Express in the Kirkhof Center are often where containers are misplaced.

Sustainability practices exist in many forms at GVSU. The university has a farm, solar gardens and many other sustainability programs, Aubil said. She also said halfway through the school year, the recycling program reminds students, faculty and staff to recycle.

Aubil thinks with just a little change, GVSU could improve its sustainability for the better.

“If people recycled without thinking about it, the numbers would change drastically,” Aubil said. “Let’s bring the awareness of recycling back and make our environment better.”