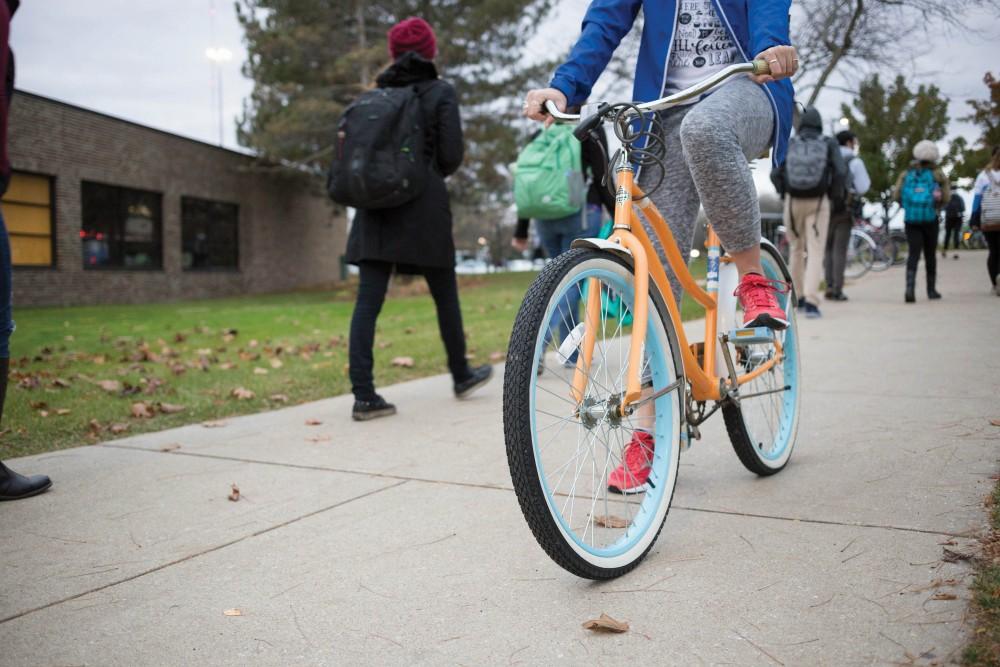 In May 2016, Grand Valley State University joined the Partnership for a Healthier America and committed to undertake several health-related initiatives to continue to improve the wellbeing of the GVSU community.

One of the requirements of this commitment was to become a bicycle friendly university (BFU), a recognition GVSU recently received from The League of American Bicyclists, which gave GVSU a silver award in acknowledgment of its bicycling amenities, services and programs.

Joe Bitely, the assistant director of Campus Recreation, submitted the application for GVSU to be named a BFU.

“When I took over the bike rental program, I didn’t want it to be just a bike rental program,” he said. “I’ve always believed it could be something much more than that, and I stumbled upon and started using The League of American Bicyclists bike friendly university program as kind of a framework for what we should be doing.”

Bitely said the application included roughly 70 questions related to education, engineering, enforcement, encouragement and evaluation. While Bitely specializes in some of these areas of bicycling at GVSU, he said it took a campus-wide effort to account for each of these areas.

“There was a lot of collaboration, a lot of reaching out to some of the other departments on campus to collect data and figure out what it is that they’re doing that would help our cause,” he said.

There are numerous bicycling amenities, services and programs available at GVSU.

“We try to offer a handful of educational workshops (covering) general bike safety, basic maintenance, (things) like that,” Bitely said.

In addition, there are 4,173 bicycle parking spaces throughout the Allendale Campus.

There is also a bicycle maintenance shop available in the Laker Village South Community Center Office where mechanics can fix GVSU bike rentals. In addition, individuals can bring their own bikes to do self-service repairs, and the bike shop staff can help individuals assess their bikes and lend them tools.

“Anyone can bring their bike out and we’ll help you figure out what’s wrong with it and give you the tools and the knowledge to fix it,” Bitely said. “We currently don’t offer any for-sale parts or any for-pay maintenance. (That) is something we’re hoping will be ready to roll out when the snow melts and the weather warms this spring.”

There are several ways bicyclists wishing to take advantage of GVSU’s bicycle friendly status can stay safe and take care of their bikes. DeHaan said all bicycles on campus at GVSU must be registered. He also recommends that bicyclists wear helmets and lock their bikes securely when they’re not in use. In addition, he said there are several safety rules bicyclists need to follow.

“We had a couple of motor vehicle crashes this fall that involved bicycles that were responsible for the crashes because they did not either stop and/or impeded traffic,” DeHaan said. “When we’re riding a bike, sometimes we forget about some of the rules of the road, and those rules of the road specifically about stopping, looking both ways and paying attention to what’s going on around us.”

Bitely said there was a newly formed bicycle advisory group at GVSU comprised of representatives from student senate, Campus Recreation, Facilities Planning and other university departments. Individuals interested in joining the advisory group can contact Bitely to learn more.

For more information about the resources available to bicyclists at GVSU, visit http://www.gvsu.edu/outdooradventures/.