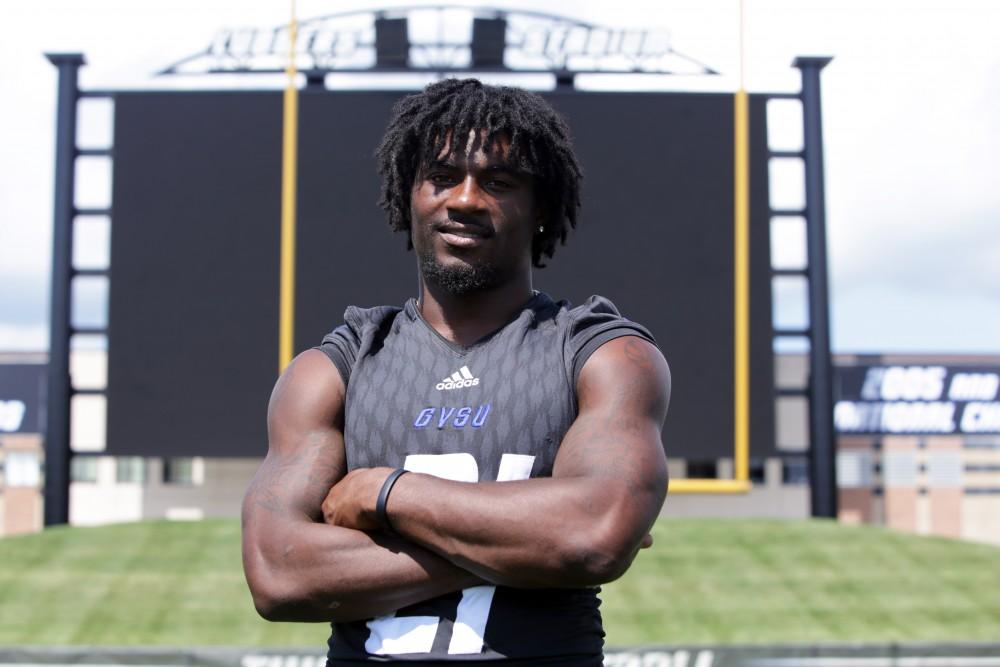 “Be yourself.” It’s the age-old advice that everybody has heard one time or another from a parent, friend, teacher or coach. Still, it can be hard to follow when you’d rather blend into the crowd.

Coming out of East Chicago, Carter, commonly referred to as “Marty,” simply tried to blend in at GVSU. He was not sure how his new teammates would react to his personality, though that uncertainty was promptly dispelled.

“Be yourself,” he said. “You don’t always have to be a quiet guy. You can be an outside guy. Be yourself. You can be about business and show your other side. (Former GVSU running back Kirk Spencer) was a comedian like me, but I didn’t want to show too much of that, but once I saw that people can take jokes, I learned I can be myself.

At Grand Valley, they accept you for who you are.”

Carter was not always GVSU-bound, though. As an elite performer on both the offensive and defensive sides of the ball, he had multiple offers from Division I schools to play ball for them. Unfortunately, those disappeared due to adversity and life situations, Carter said.

His football career could have very well been over at that point, but that’s where Laker head coach Matt Mitchell and GVSU came in.

So far, it is fair to say that Carter has more than cashed in on his opportunity at redemption.

In 2015, he racked up 889 yards and seven touchdowns on 135 carries, in addition to catching passes and serving as a return man—impressive marks for a player’s first collegiate season. He played the first half of the campaign underneath Spencer on the running-back depth chart until an injury sidelined the starter for the rest of the season.

Carter’s true debut came in the 2015 Division II playoffs against Colorado State Pueblo, when he carried the ball 26 times for a school record of 231 yards and a touchdown and threw a 22-yard touchdown pass.

“The opportunity was a great chance for me to prove what I can do,” Carter said. “My teammates had faith in me when Kirk went down. This is when I could step up, and I knew I had to do it for the team and do it for Kirk.”

Even after such an eye-opening performance, Carter was still relatively unknown, but the momentum from his playoff performance clearly carried over into 2016: Carter broke the GVSU record for rushing yards in a season and led the conference in carries (256), rushing yards (1,908), yards per game (146.8), yards per carry (7.5) and rushing touchdowns (20). He was honored as D2football.com’s Offensive Player of the Year, beating out players like the Chicago Bears’ second-round draft pick Adam Shaheen of Ashland, and made the first team All-American list.

Carter’s dominance not only helped the Lakers win games, but also aided his teammates in performing better relative to previous seasons, too.

“If you’re at the games and saw his impact, I think he helps everybody around him,” Mitchell said. “In the 2015 season, we had to throw the ball more, and you saw a lot of touchdowns but a lot of interceptions from Bart Williams. And last year he cut that in half, and a lot of that can be attributed to Marty Carter.”

Williams, who is no stranger to putting together strong seasons, appreciates the monumental contributions from his star running back.

“I think we weren’t as reliant on the pass, which is good for us, and a lot of that is because of Marty,” the quarterback said. “He earned a lot of extra yards. The game plan: It took a lot from other coaches to stop Marty. It helped me make better decisions and helped me keep the ball away from the other team.”

Carter is no longer unknown—that is a certainty—but the speed and intelligence he possesses are practically unmatched in Division II, making him incredibly difficult for opposing defenses to plan for.

Regardless, teams will still have to devote a majority of their attention in his direction, opening up room for the Lakers’ wealth of other playmakers to have massive impacts of their own, and that’s assuming the extra eyes on Marty even slow him down.

“It’ll be interesting, definitely,” Williams said. “If you watched any film in 2016, (Carter is) probably your number-one priority, but that’s what makes us good on offense. We have so much talent on offense at the skill positions, and it’s not just Marty at tailback. Honestly, too, if you’re game planning for Marty, it’s hard to contain him. If he’s game planned for, it’s not a bad plan to still get him that ball.”

Another repercussion of his breakout season, though hardly an unwelcome one, is the attention Carter anticipates attracting from NFL scouts. It is not often a player gets professional buzz after only sophomore year, especially in Division II, but Carter is just that good.

GVSU has a history of churning out solid pros, including the likes of Dan Skuta of the Bears, Tim Lelito of the Tennessee Titans, Charles Johnson of the Carolina Panthers, and Matt Judon and Brandon Carr of the Baltimore Ravens.

However, history has favored the big guys out of GVSU: Of all the Lakers to ever make the jump to the NFL, 13 of them were linemen; five were wide receivers; three were quarterbacks; and only Eric Lynch, who played for the Detroit Lions from 1992 to 1996 and tallied a mere 209 rushing yards in his career, made it to the league as a tailback from GVSU.

Though history may suggest that taking the next step could prove difficult for Carter, he has no shortage of confidence in his ability.

“I feel like I have an opportunity to perform at the next level,” he said. “All it takes is a little adjustment. Going to college was an adjustment, and I’m an adjustable player, so I feel like I can adjust. There might be some adversity, but I’ll get through it.”

Carter has a multitude of reasons to continue playing hard, and the list begins with his children, Martayveus Jr. and Mar’Ree. He plays for his family and the teens struggling to get by in his hometown. He plays for his team, and he plays for the second chance he received out of high school.

Carter plays to win, and if his drive and talent are any indication of what he is capable of doing, it’s fair to assume he is only getting started.