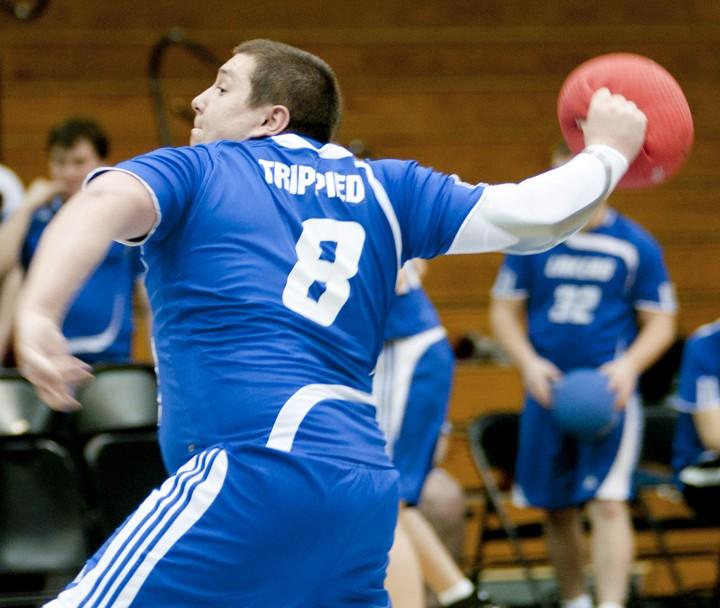 Sophomore Mark Trippiedi hurls the ball at his opponent during a past matchup.

In accordance with its slogan, “Headshots Guaranteed,” this season the Grand Valley State University club dodgeball team is looking to give out plenty of headshots to any opponent it comes across.

With only six returning players from its 2010 national championship team, the team put together a strong showing in its season opener last weekend at the Bowling Green Invitational.

The Lakers went undefeated on the day and surrendered just one point in the first match against Kent State University.

The team is coming off a rebuilding year that saw many firsts, including back-to-back losses, the first home loss in program history and falling to Central Michigan University in the final of the NCDA National Championships. this year’s team is back for revenge.

“It was truly a great team effort on Sunday,” said Mark Trippiedi, team captain. “The young players on the team spent most of last year getting their feet under them and learned a lot last year.”

With many young players on team, it would seem that this year would be another learning experience, but Trippiedi assures that it won’t be.

“I am so excited about how much talent we have on the team this season,” Trippiedi said. “Unfortunately, there are 20 spots on a varsity roster and there are more players than that who are talented enough to play on the varsity team. It is an awesome problem to have.”

In response to the fully-loaded roster, the team has taken a different approach during practices this year. As in former years, the team will come and play dodgeball at every practice, but this year members are putting more emphasis on making catches and communicating.

“I’m stressing on making catches, blocks and communication with the rest of the team,” Trippiedi said. “At practice when we communicate better, we tend to play quicker and more efficiently as team while keeping it fun so the team stays loose.”

Along with those keys, the team will use strategy as a way to prepare for its upcoming home opener against Saginaw Valley State University.

“We go over the other teams strengths and weaknesses and form different strategies to combat each scenario,” said Dan Lesley, an assistant captain. “By the time game day comes around, everything becomes second nature knowing where and what to do on the court.”

When the game rolls around, the Lakers know that the target will be on their back again this year.

With four national championships already under their belt, they expect to contend for a fifth this season.

“Over the last few years we have always been considered the best, or at least one of the best teams in the country,” said assistant captain Jeremy Stempky. “Our team is good enough this year to have a chance at winning the national championship.”

The Lakers will play their home opener against Saginaw Valley on Nov. 6 at 1 p.m. in the Fieldhouse Arena.