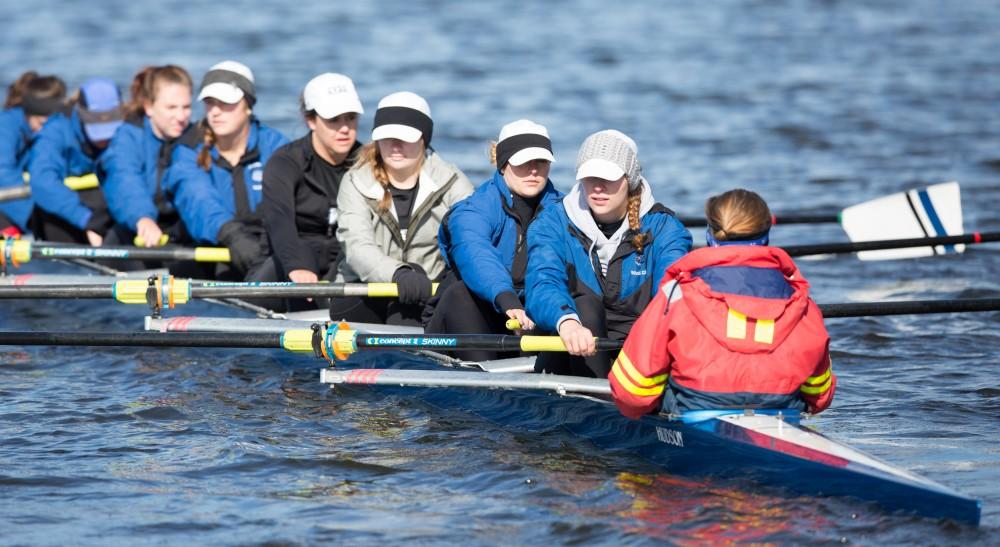 The Grand Valley State rowing club has been busy traveling all over the U.S. during its fall season.

The Laker Navy has already competed in Nashville and Boston, and toward the end of the fall, they will also compete in Indianapolis. Shortly after, the women will head to Tampa, Florida, for training camp.

Rowing was not only one of the first sports that was offered at GVSU, but it was also one of the first clubs to originate shortly after the university’s creation. The sport started in 1964 at GVSU as a varsity sport but was changed to a club sport in the mid 1980s and has remained one since. GVSU rowing coach John Bancheri believes the club’s greatest trait is its strong-rooted tradition.

“Rowing at Grand Valley is an old sport,” he said. “It’s the first sport at Grand Valley. We had a really good run there for the past 10 years, but this past year, our numbers are down a little bit, and now we are working on recruiting and rebuilding.”

With rowing being such a storied program at GVSU, it requires a lot of hard work and sacrifice from the players. There are perks to traveling around the country competing, but Bancheri also realizes the time investment and physical toll the sport takes.

“We are competing at a high level, and there’s a cost to it,” Bancheri said. “Physical, mental, social—you have to commit and be willing to put the time in. This has become an elite activity on campus, and I believe the guys and gals on this team are true warriors. The ones that don’t last, they have other things going on, and I understand that.”

The team trains and practices 18 hours on average every week. Throw that schedule in with a full school workload and it’s enough to potentially overwhelm a student. But senior captain Donnie Jensen said that isn’t the case for him.

“For me, when I first started rowing, I had a problem with time management, but it sort of just took away all my free time,” Jensen said. “Now, I wake up, go to class, do homework before practice, go to practice, eat, do more homework and go to sleep. My GPA (went) from a 1.8 to a 3.9 when I started rowing.”

The rowing club is constructed differently than most other clubs as there are four different teams that compete. Those teams include men’s varsity, women’s varsity, men’s novice and women’s novice. The novice teams are where the newer rowers first go, and it’s a place where they can learn the technique and fundamentals of rowing before having to compete at a high varsity level.

Bancheri talked about the novice men’s and women’s teams and how they are looking heading into the end of the fall season.

“Our novice men’s team is really rebuilding,” Bancheri said. “We’ve got some big, strong guys, and they’ve showed a lot of promise early in the season. The novice women have a nice group of athletes. Their new coach, Dan Martin, he’s done a great job. He’s put them on simmer mode, slowly developing them, but you can see them coming along.”

One of the leaders on this year’s team is senior captain of the women’s varsity team, Cass Bruins, who has had to learn to take the novice talent and newcomers under her wing.

“I really try to lead by example,” Bruins said. “I am one of the lesser-experienced rowers on the team, but I’m still one of the fastest girls on the team. It’s really about helping the people below you forward; this team is really good at that. Everyone pushes everyone forward no matter what their status on the team is.”

Bancheri discussed his outlook on the rest of the season.

“This is preparation for the spring,” Bancheri. “We have a race this weekend called the ‘Bald Eagle’ with top club teams from the Midwest and East. It’s going to be a competitive event, but our priority is on the freshman eights. Our freshman men got pounded last year, but I have a funny feeling that they are going to be in the hunt.”

The GVSU rowing club will be in Indianapolis this weekend, starting Saturday, Nov. 4, to row in the Eagle Collegiate Challenge. The event will be the team’s final event of the fall.