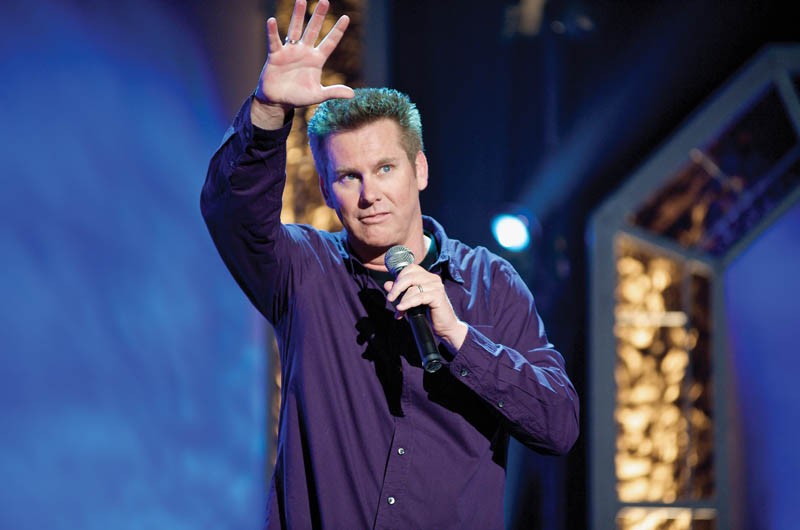 In eighth grade, Brian Regan’s peers made a pamphlet listing what each person was going to be when they “grew up.” His was, unknowingly to himself yet, comedian.

“I was like, ‘Wow, my classmates knew more about me than I did,’” he said.

Unlike his peers, Regan didn’t realize his comic calling until college after starting on a path toward “the incredibly exciting world of accounting.”

Luckily for him, and for all of his fans, he decided to try comedy. And once he realized he could get onstage and actually make people laugh, his career path was set.

“I really enjoy being a stand-up,” Regan said. “I liked it from the moment I thought of it – not that stand-up comedy didn’t exist before me. But the first time I thought of it for me, when I was like, ‘Hey, maybe I could do that.’ I became enthralled with the idea of stand-up and being onstage and trying to make people laugh. It took a number of years to get to the point where, ‘Wow, I could do it and make a living at it.’ And now I’m fortunate enough to have a little bit of a following and I don’t take it for granted. I love every moment of it.”

He’s appeared on “The Late Show with David Letterman” 25 times and has broken records by selling out 10 shows last January in Salt Lake City’s Abravanel Hall. His two March 16 performances at the DeVos Performance Hall are part of this year’s LaughFest, and aren’t sold-out yet, but have a limited amount of tickets.

His LaughFest content rating is “Clean Adult Laughs” for his lack of curse words, or inappropriate topics. Regan knows his jokes are clean, but wouldn’t describe himself as a “clean comic.”

“I just like to get onstage and do my thing and have it be funny,” he said. “For some audience members, it’s important that it’s clean; for others, they don’t even think about whether or not it’s clean. To me, a lot of people get the wrong idea, you know, they think, ‘Oh wow, this guy must be Johnny Wholesome,” and it’s not that at all…I like to do comedy with clean words and concepts – it’s fun for me. And then I get off stage and I curse like a sailor.”

He describes clean as his medium, like how an artist uses oils or paint to create, and draws inspiration from his everyday life.

Once he has an idea, he uses some writing skills and the inspiration turns into a bit with a beginning, middle and end that will make audiences laugh. He tries to write new jokes as often as possible.

“I’m always trying to come up with new stuff, so hopefully if they saw me last time around, they’re going to see a lot of stuff this time that they didn’t see last time,” he said. “And that’s one of my favorite compliments after a show, when people say, ‘Wow, most of his stuff we haven’t seen before!’”

He has new material for his Grand Rapids shows, and said he’s excited to be part of this year’s LaughFest.

“I like comedy whether it’s just one night and it’s not part of anything else, or I also like it if it’s part of something bigger,” he said. “And this time around, it’s part of a bigger festival and it’s fun to be part of a celebration – I like balloons just as much as anybody else.”
[email protected]