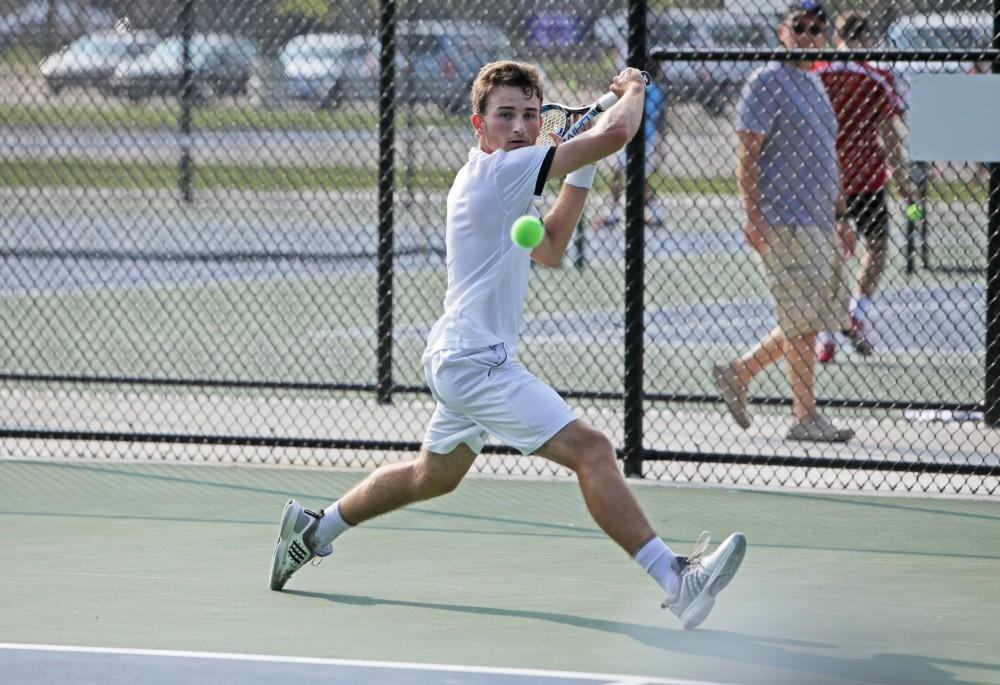 The Lakers held two tournaments for 19 teams. Each team came from a college in the Midwest area to compete in singles matches and double matches.

In the singles tournament, the Lakers finished strong as GVSU tennis players Sebastien Lescoulie and Jack Geissler make it to round 16 in the A singles. GVSU tennis gained at least one win in the B singles from each GVSU player.

Coach John Black, returning for his 13th season, was pleased with his team’s results this early in the season.

“Overall, I felt we played very solid considering we’ve only had a week-and-a-half of practice leading into it,” Black said. “I felt our singles were further ahead than our doubles, and that’s partly because this (past) weekend we had five brand new doubles teams that had not played together last year. It just takes time adjusting to a new partner.”

The ITA Regional Championship Tournament gave the Lakers an opportunity to play together and showed the team’s strengths and weaknesses.

“Doubles (matches), we need to work on being more aggressive, not passive, attacking the net, attacking the ball,” Black said. “So, overall, I was very pleased with how we did, and I do feel doubles need a little bit more work at this point than singles.”

The Lakers competing early on in their season allowed GVSU tennis to redirect its focus to become a stronger team. Junior Nick Urban believes the men’s team needs to experience more matches before the next event.

For returning player Pedro Gomez, he knew the team found value in each other’s companionship and believes the team can now focus on the performance.

“We need to get more in sync because we haven’t played a lot of tournaments in the last past week,” Gomez said. “We need to play a lot of points, and I think that’s it. We are playing good tennis. We are pretty similarly good, everyone on the team is pretty close, and so we just need to boost to that next level and practice harder.”

For the rest of the team, they believe big things are still to come for GVSU men’s tennis this season.

“I think our goal is to win conference and go to round 16,” Gomez said. “Each year we are getting better, and we are closer to that level that we need to get to. I think we’re going to win conference this year.”