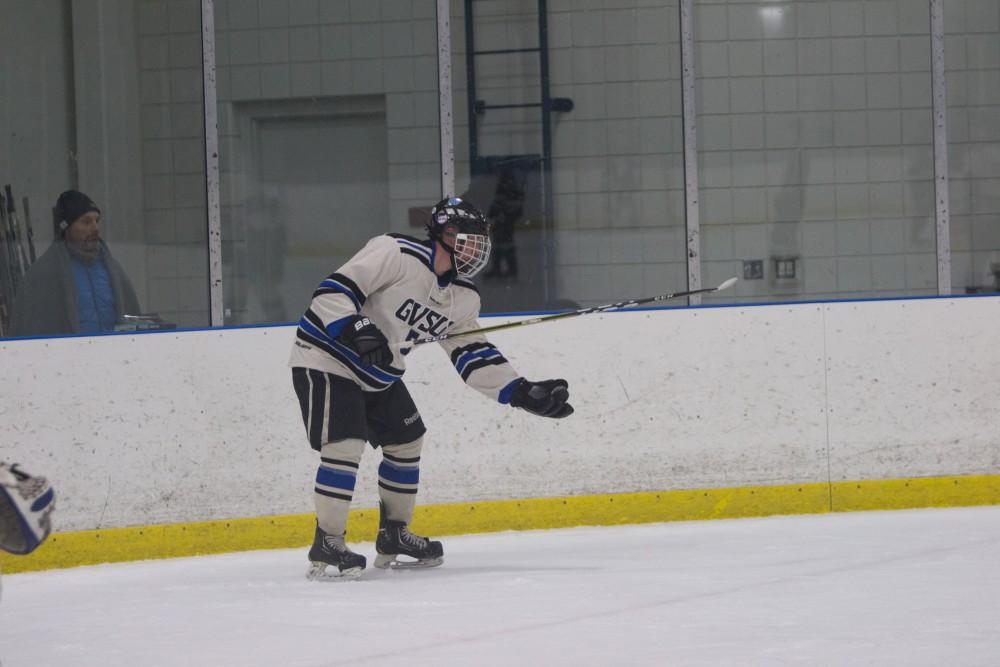 The first week of the winter 2018 semester is officially over, and the Grand Valley State men’s Division II club hockey team has gotten right back to its winning ways, defeating Indiana University on Saturday, Jan. 13, by a score of 5-2.

GVSU got the scoring going early with Tommy Carey making the first goal just eight minutes into the contest. The score came off assists by Lucas Little and Ryan Hein.

The scoring kept pouring in for the Lakers, as two more pucks saw the back of the net with five minutes remaining in the first period. Cameron Dyde scored at the 5:01 mark, and German Samvel also converted at the 4:43 mark. Assists on these goals came from Hein, Carey, Troy Marrett and Austin Koleski.

“We got some great rebound goals today,” Carey said on the team’s successful offensive attack. “Because we stuck to our systems, we did a really good job of getting shots in the net.”

GVSU’s win completed the sweep for the Lakers, as they blew out the Hoosiers 9-1 on Friday, Jan. 12. The Lakers’ consistent defense and offensive contributions from all of the roster allowed them to get the second half of their season started off the right way.

“We really moved the puck well all weekend long,” Hein said. “We were solid all around on offense, as we got all four of our lines going over the weekend.”

As the second period started, the hot start from GVSU continued, as they raised the lead to 5-0 before Indiana had time to think, including one goal in the first 20 seconds of the period. Carey scored again with 19:42 left in the period, and Nicholas Beers scored three minutes later. GVSU used this hot start to coast through the rest of the game.

“We did a great job offensively today,” said coach Mike Forbes. “We cleaned up in our (offensive) zones. We just have to be more consistent in them as the game goes along.”

On the defensive side of the ice, GVSU debuted a new goalie over the weekend, and Dylan Knox did a solid job in the net. Forbes is very excited to see Knox, a transfer student from the University of Maryland, Baltimore County, find success this early on.

“He played well all weekend long,” Forbes said. “He’s a good veteran goalie who just transferred in this semester, and we’re very happy to have him.”

As the second half of the season starts for this hockey team, the expectations are quite high. Because of this, Forbes says there are still a few things this team needs to work on before regionals, including finishing games. GVSU allowed Indiana to score the last two goals of the game, and Forbes really wants to see his team finish off opponents more consistently.

“It was a good team effort today, but we can be better,” Forbes said. “We need to be more consistent and show up to every single game, as it’s important that we can stay focused so that we can rise to the occasion once regionals start and playoff hockey really gets going.”

It is indeed important that GVSU continues to get more dominant as the playoffs get closer and closer with each passing day.

GVSU looks to improve its impressive 17-3-2 record (11-2-1 at home) next weekend, as the Lakers have two matchups with the Blue Demons of DePaul University. They will travel to Chicago for games on the weekend of Friday, Jan. 19, and Saturday, Jan. 20, at the JIH West Arena. Friday’s puck drop is at 9 p.m., and Saturday’s is at 1:45 p.m.