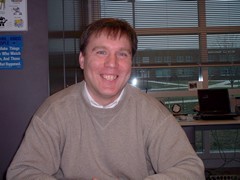 In the wake of several youth suicides across the nation, Grand Valley State University has stood tall with compassion as many departments have thrown their support behind students suffering from depression. About 400 people attended the candlelight vigil on Oct. 12 at the Cook Carillon clock tower to honor and remember the lives of seven LGBT youths across the nation who had recently committed suicide.

The GVSU Counseling and Career Development Center just completed a mental health screening program last week with the survey still available online on its website. The goal was for students to self-diagnose their levels of depression. The Counseling Center also employs a program called QPR in dealing with suicide prevention and combating depression. The program helps students question, persuade and refer themselves, friends, family or other students who are contemplating suicide to find help.

Counselor and Career Outreach Specialist Brian Bossick stressed that suicide is not a private act as the implications affect a community on a wide scale.

“When someone commits suicide, it strongly impacts the whole community,” he said. “There’s a sense of sharing a common struggle, and people really seem to understand that.”

The QPR system, as well as the screening tests done last week, are crucial in helping individuals deal with depression, Bossick said. When someone does attempt a suicide, the counseling center provides support using QPR.

“It’s a great program that offers support,” Bossick said. “We want to provide an environment that feels safe and lets the victim lead the session.”

The counseling center also works with victims to build up their strengths and connect with them. Over the summer, they provide training for resident assistants in dealing with students who are suffering from depression and may experience suicidal thoughts.

Patrick Lawrence, a senior who has served for a resident assistant for two years, said he keeps a keen eye out for residents who may be afraid to admit that they are depressed.

“It is common, however, for a resident not to seek an RA’s help when suffering from depression, which is why I try to interact with my residents often to know how they are doing,” he said. “This sometimes includes visiting a resident who has become less involved in floor activities or keeping an open ear during conversations in case a resident mentions that their roommate seems to be struggling with something.”

Sophomore Matt Gauthier had suffered from depression since junior high until being proscribed with antidepressants last year.

“The best way I can describe it is that it’s just a never ending feeling of sinking, a downward spiral always dragging you down deeper and deeper,” he said. “It’s not a fun feeling to have. It makes you feel like everything is pointless and it’s near impossible to see any point of even trying.”

With the help of antidepressants, Gauthier, a psychology major, continues to push forward with concentrated courage and determination. Although he is currently content to be on antidepressants, he hopes in the future to be able to see counseling and continue to get help.

“It takes a lot of courage to do something like that since it’s not easy to openly admit to someone that you have problems and you’re depressed, and its even harder to go and talk with a stranger about it,” he said. “I think that’s what stops a lot of people from seeking help, because in society even though everyone has problems, we’re supposed to be so independent and do things for ourselves and fix ourselves. So to make yourself vulnerable and go and seek help like that is a hard thing to do.”

There are many helpful options for GVSU students like Gauthier suffering from depression, including programs and resources offered within living centers.

GVSU Director of Housing Andy Beachnau also stressed helping students who are suffering from depression or who had either attempted or considered suicide in the past by referring them to the Counseling Center.

“We take an educative or supportive role while working with the Counseling Center when we encounter a student suffering from depression or considering suicide,” he said. “We try to create a supportive environment that’s accommodating for both the student and their roommate(s).”

When dealing with a victim suffering from depression who may consider attempting suicide, Police Captain Brandon DeHaan said the GVSU Police Department offers a holistic approach in helping the individual.

“Our role as law enforcement officers is to interact with the individuals suffering from suicidal ideation and make sure they have the opportunity to speak with the Counseling Center,” DeHaan said.

If you or someone you know is suffering from depression, please visit the Counseling Center in the Student Services Building.