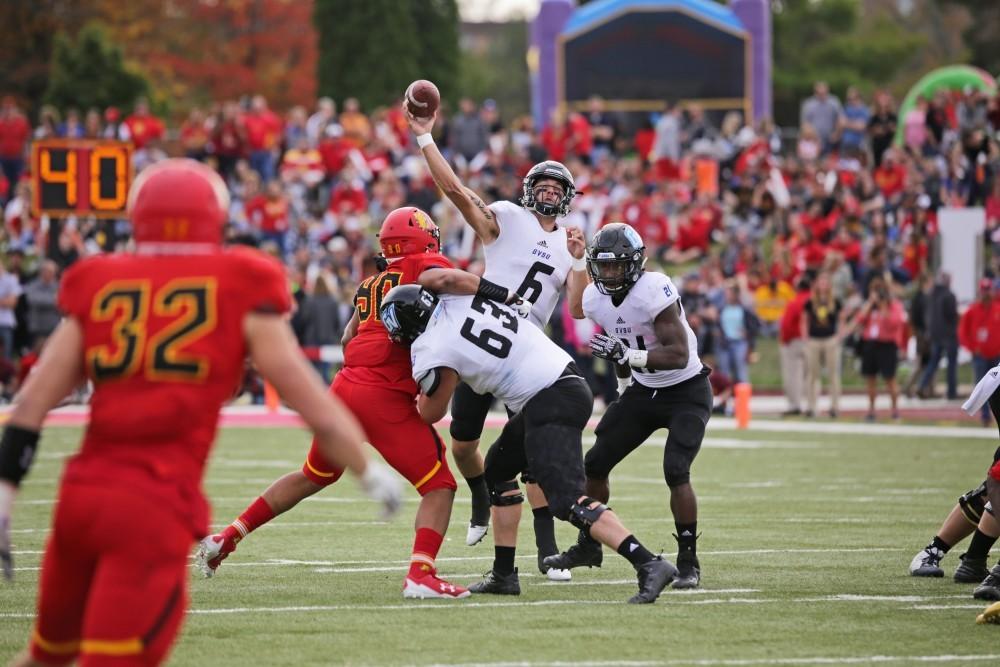 The 2017 season did not go according to plan for the Grand Valley State Lakers football team.

Coming off of a Division II playoff berth the previous season with more production expected to be gained than lost for the new season, the Lakers finished “only” 8-3 – a record most teams would call a success, but one that GVSU refuses to settle for.

Luckily, it’s a new year and the winningest program in NCAA football history is ready to learn from their shortcomings.

“We’re going to try and be a team,” said head coach Matt Mitchell who is returning for his ninth season at the helm. “Some of the parts are going to be better than the individuals and that starts a lot with accountability, trust and building that culture. Our culture is set by leadership. I’m a leader, our assistant coaches are leaders, but I’ve been working hard trying to develop team leadership, to make this a peer driven unit that’s playing together and not individuals achieving for statistics or trying to make it to the next level.

“I think we’re going to be a true team and we’re working really, really hard to achieve that team culture and team chemistry. At points last year in our three losses we weren’t that way. We were a little individually operated. I think that cost us at times.”

Take the GVSU veterans and add defensive back Grant Postma, who missed all of 2017 with a torn ACL, and two defensive lineman Division I transfers in Jake Hlava from Northern Illinois and Johnathon Williams from Toledo and GVSU looks ready to improve on a unit that allowed opponents to score double-digits in only four of 11 games last season.

The offense, though, has a few more questions to be answered.

After the graduation of leading receivers Brandon Bean, Urston Smith and Nick Keizer, the Lakers knew there would be holes to fill. Things became far more ambiguous once it was announced on June 29 that GVSU’s leading rusher from the two previous years, Martayveus Carter, would forgo his senior season to enter the NFL’s supplemental draft.

“Obviously Marty has been a great player for us the last three years,” said quarterback Bart Williams. “We’re going to miss the big play ability that he brings to the table. We wish him the best of luck at the next level.”

With Carter and his unmatched production suddenly out of the equation, it will be up to players like Bryce Young-Walls, Dre’on Kemp and Jack Provencher to step in and fill the gap.

“(Our next starter) is to be determined. Spring practice was great for us. I think we’re always going to use three tailbacks at Grand Valley,” Mitchell said. “The biggest thing to lose with Marty not being around next year is that homerun threat. He could get in the back of the defense and just run away from everybody. I don’t think we’re going to have that with some of the guys we have coming back, but we have guys that are really good running backs. They stick to the plan, have great ball security and can do some things out of the backfield too. We’ll just have to find out who the best guys are who give us a chance to win.”

The only certainty in the question-filled GVSU offense will be Williams himself, entering his fourth season as the Lakers’ starting signal caller. The now-Laker legend has thrown 105 touchdowns to go along with 9,854 career passing yards – both numbers that, barring an injury, will likely surpass Curt Anes’ school record of 114 and Cullen Finnerty’s 10,905, respectively.

While having lost they several key contributors, Williams will still have Nick Dodson who led the team in catches, yards and touchdowns in 2016 but struggled last year before having his season end early due to injury, along with Austin Paritee and a handful of other pass-catchers poised to capture the spotlight.

“I think Brandon Wadley had a really good freshman year,” Williams said. “He was really good in the return game especially and he had some moments on some jet sweeps down the field and had some moments. I think we’re really going to need him to come on big time. Jalen Bryant has been there for a long time, he’s always reliable. Ethan Cortazzo, he was a transfer who was injured a little bit last year, he has a chance to get in the mix. I think that all the wideouts are very confident. Anybody who can get in there right now is going to be performing well and I think I have confidence in all those guys, even when it’s not Dodson or Paritee.”

While the offensive questions can be solved, there is one major aspect of GVSU’s 2018 campaign that is – and will remain – an area of uncertainty: the schedule.

“I think it’s a really challenging schedule,” Mitchell said. “I don’t know how many (Division II) teams have four playoff teams from the previous year on their schedule. We have three non-conference games and two of the three were in the playoffs last year. It’s going to be extremely challenging.”

The four playoff teams are Delta State, Indianapolis, Ferris State and Ashland. The latter three schools accounted for all of the Lakers’ losses last season by a combined eight points with each game being on the road.

Luckily for GVSU, all three of those opponents will be visiting Lubbers Stadium in 2018, though the difficulty of playing the best of the best remains.

“Speaking for myself, I came to play college football to play against good competition and play good football games,” Williams said. “The result of those games is definitely going to come down to who prepares more and who plays harder and who makes better plays on the day of the game. Any time you have a chance to get on the field in front of some really good players, some really good teams, some really well-coached teams, those are the fun games. They’re all a good time, they’re all important but the ones against top level talent, those are the ones that can define your season.”

Though some questions loom large and others have been promptly erased, the Lakers are ready to begin the season and prove that last year was nothing more than a down season by re-establishing themselves as the playoff team opponents dread seeing on their schedule and not the other way around.