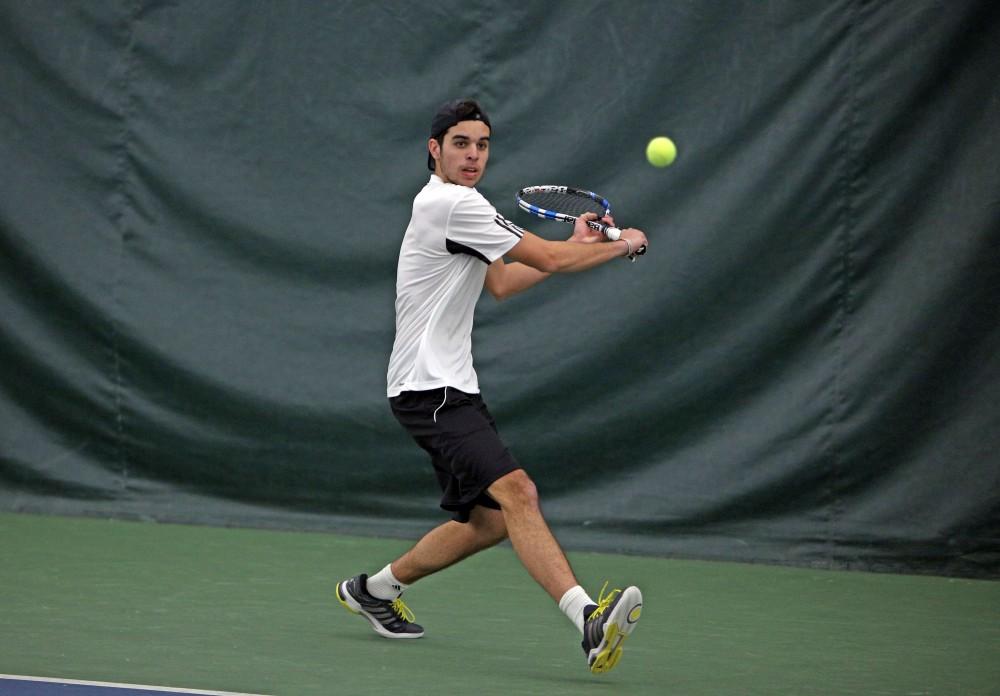 The Grand Valley State men’s tennis team swept its opening GLIAC series on the road against Hillsdale, 7-2, and Findlay, 6-3, on March 19 and 20.

“We traveled all through Michigan and Ohio and played some pretty solid tennis,” said GVSU head coach John Black. “However, there is still room for improvement, especially since coming up we will be tested against some of the top teams in our region.”

The Lakers (8-4, 2-0 GLIAC) jumped out to a hot start against the Chargers thanks to dominant performances in the singles matches. Sophomore Alex van de Steenoven got the Lakers going with a solid first-match victory.

GVSU won five of the possible six singles matches and put the team in a position to win the overall match.

The doubles matches were also controlled by GVSU, as the Lakers won two of the three contests. Senior Andrew Bole and freshman Nick Urban highlighted GVSU’s performance. Both players won their singles matches and teamed up to win the first doubles match for the Lakers.

“This weekend was a great start in the GLIAC,” Bole said. “It is a great confidence builder going into one of the biggest matches of the year against Ferris (on) Wednesday. Just a great weekend to build from to continue strong into the rest of the season.”

The next day, GVSU traveled to Ohio with hopes of beginning the conference season undefeated. The Oilers had other plans in mind, though.

The Lakers started slowly. They fell behind 0-2 in the singles matches, but made up ground quickly after a key win from freshman Sebastien Lescoulie, which helped spark the Lakers to four consecutive singles match victories in a row.

Once again, both Bole and Urban won their matches to close out singles play, while Urban teamed up with senior Michael Kaye this time in the doubles arena for the victory.

“I think I played well enough to win,” Urban said. “But I believe I could have played better. I played inconsistently and ran in streaks of playing well and playing poorly, particularly in the last match against Findlay. That is something I need to change for upcoming matches.”

The Lakers have a quick turnaround as they will play three matches this upcoming week and once again they are all on the road. The Lakers will travel to Ferris State on March 23, and to Indianapolis from March 25-26 to take on the University of Indianapolis and Missouri – St. Louis.

“We are back at practice once we get back to campus to prepare for Ferris,” Black said. “The teams in this league who will succeed will be able to handle the pressure. Any team can beat anyone on any given night in this league.”

This opening weekend start for GVSU looks to be a promising sign for the future of this season. The Lakers displayed overall team depth as multiple underclassmen helped pick up the upperclassmen this past weekend. If the Lakers continue on this path, they’ll figure to be in the mix at the end for the GLIAC title and a possible journey into the NCAA tournament.