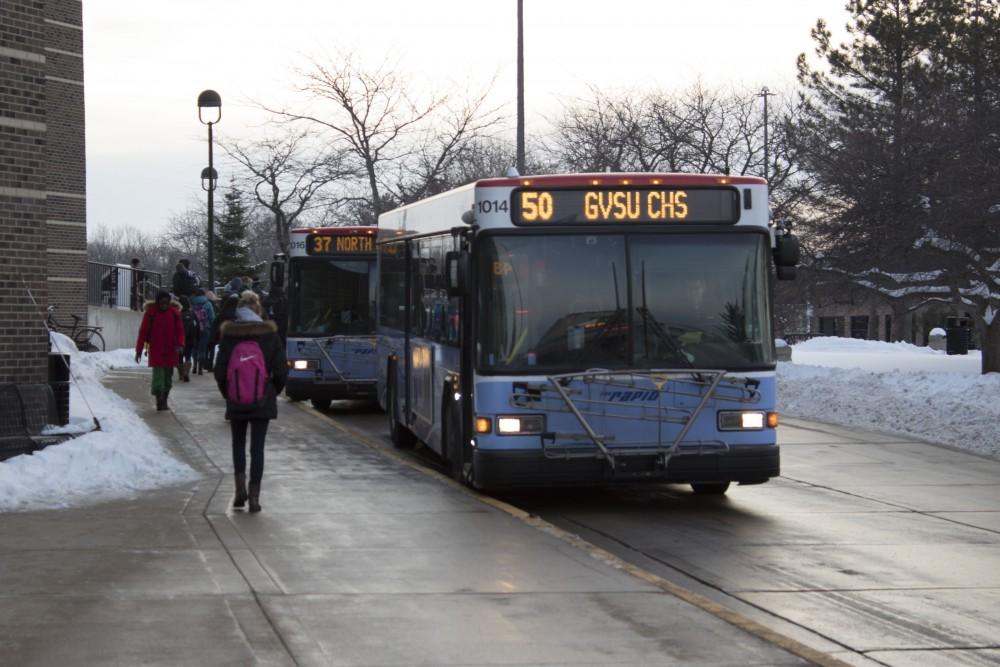 Development is officially underway for a new transit system between Allendale and Grand Rapids. The Laker Line initiative received federal funding on Friday, Feb. 9. This latest project is meant to improve transportation between GVSU’s Allendale and Pew campuses.

D. Scott Richardson, retiring acting vice president for finance and administration at GVSU, said this project has been a long time coming.

“This is a project that’s almost five years in the making,” he said. “In particular, it’s going to have an impact on students who need to get from this campus (Allendale) to the health sciences building. It’s going to streamline and shorten the run.”

The new bus system will replace the 50 route, which currently connects the two campuses, and will run 16 buses, all larger than the ones being used now. The 50 seats about 40 passengers, while the new buses will seat 60 and have the capacity to carry up to about 80 people.

Despite the good news of the project receiving the funding it needs, many are still wondering why the approval took so long. According to Richardson, national politics may have played a role in the delay.

“I think for one it’s a significant project,” he said. “But also, there’s lots of financial discussions that started happening with the new president and new administration on tax relief, government structure and funding programs for things like this. Everything slowed down for a while until the new administration made decisions on funding.

“Given that, we’re quite excited and thankful to the people in Washington who helped with this. Bill Huizenga was helpful in guiding us through the bureaucracy, talking to the right people in the right offices and keeping them focused on this project.”

The project will cost around $70 million, with more than 80 percent of the costs being covered by the recent federal grant. The Michigan Department of Transportation will cover the remaining costs.

Other new features of the bus system include traffic signal priority technology and newer, nicer bus stops, which will be elevated to the level of the buses and heated in the winter to prevent ice. Since GVSU’s population makes up more than 2.5 million passengers on the Rapid bus system annually, this new initiative will most likely have a bigger effect on GVSU students than anyone else. But in addition to helping out students at GVSU, the new Laker Line bus system will also have a community impact.

“The Rapid is a six-community consortium,” Richardson said. “It’s not just Grand Rapids; it’s other cities as well. I hope the impact on this is greater than just Grand Valley. If there’s people that work at Spectrum and live along M-45, they should be able to take the bus to work now.”

However, Richardson said that even though the funding has gone through, it will still be some time before the new system is officially completed and open to the public.

“The honest answer is their construction schedule isn’t set yet,” he said. “Now that it’s fully funded, they want to get busy. Whether they’ll have all the new bus stops constructed by fall, I kind of doubt it, and whether the new buses will start running before the project is done, we don’t know yet.”

Construction on the project may begin as early as this spring, with completion being targeted for spring 2020.