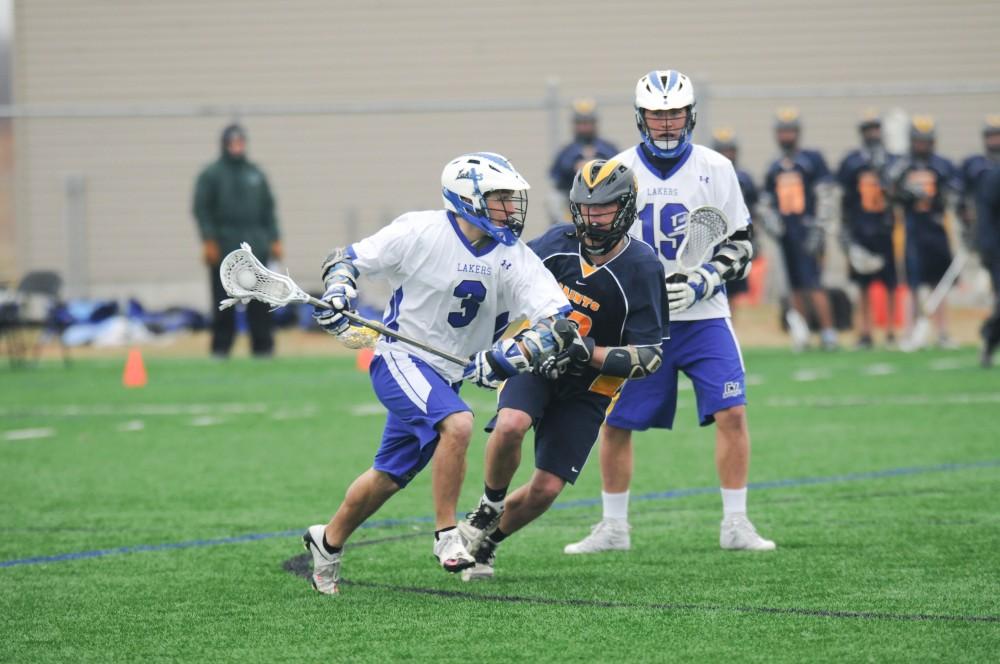 When the Grand Valley State University men’s club lacrosse team hosts cross-town rival Davenport University Thursday at 5:30 p.m. in a battle of unbeatens, the Lakers will look to avenge their quarterfinal loss in the 2010 postseason to the Panthers by handing them their first defeat of the 2011 campaign.

GVSU is off to a quick 5-0 start after out-scoring opponents 106-41 in five games while Davenport has posted an equally impressive 6-0 start behind a major scoring advantage of 111-28.

Although Davenport has been a thorn in the Lakers’ collective side in the past, GVSU defeated defending champion University of St. Thomas on March 12, a game that has given the team a great deal of confidence going forward.

“Playing a team like St. Thomas, who have been the definition of a dynasty of our league and getting the upset victory has helped boost our confidence,” said Jack Dumsa, junior captain. “But it will take a lot more than that to beat (Davenport) on Thursday.”

Despite beating the Panthers in two of three games last season after winning a regular season match-up and again in the CCLA tournament, the quarterfinal loss to end the Lakers’ season still resonates amongst the team.

“When we lost to (Davenport) in nationals, it felt like they won the one that was really important,” Bielby said. “Nothing stings more than that, so coming in and playing a solid game and sending them home with a loss on their record would be huge – not to mention staying undefeated against top-10 teams.”

Dumsa said the team has an added advantage of wanting the win more after last years’ heartbreaking loss.

“We definitely have a chip on our shoulder coming in after they beat us by a goal in the tournament in May,” he said. “I think we have an advantage by being home, and our experience has helped us so far since we know we always have a target on our backs coming into each game.”

The Lakers have out-scored opponents by 10 or more goals in every game except their 16-14 win over St. Thomas, but a defensive battle could likely ensue as two of the nation’s best offenses go head-to-head.

Senior Cam Holding said winning the game would come down to hard work and passion.

“If we want to work and we come out with heart, we’ll win,” he said. “This is a big rival game, like Michigan against Michigan State, and it’s a game you want to win. It would be huge for our team and everyone would go home happy.”

Bielby said the Lakers would find success if they continue to execute designed plays and follow the systems that have made them successful.

“Our systems and what we’ve been doing on the field will be enough to win but we need to stay disciplined within those and execute throughout the game,” he said.