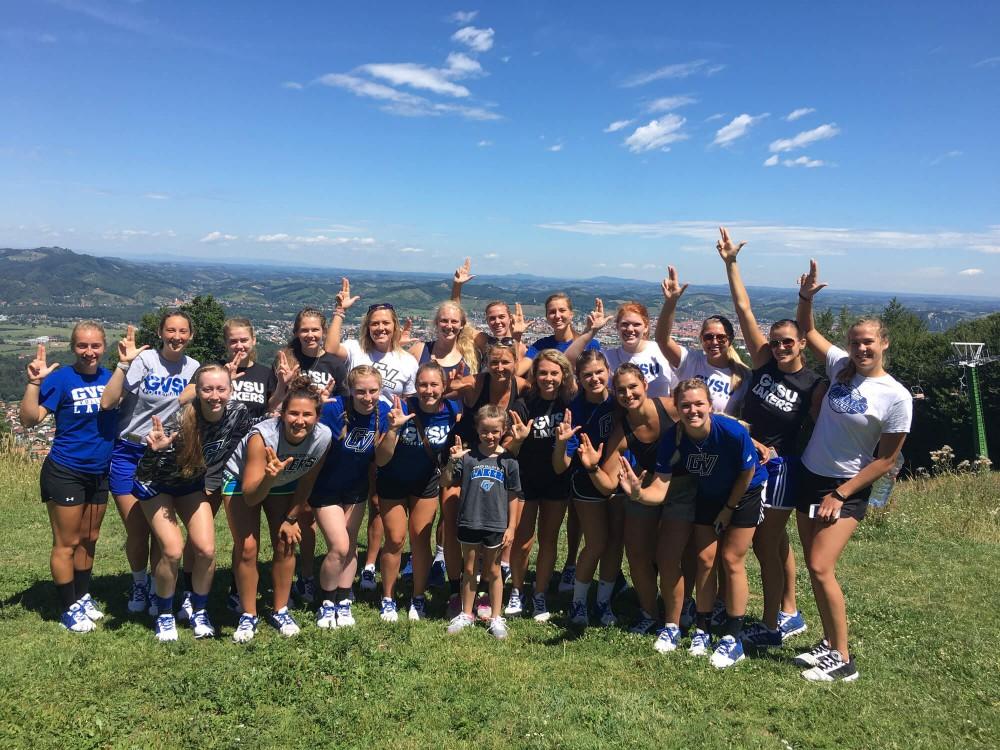 Grand Valley State’s volleyball team took a hit last season after losing to Ferris State in the first round of the GLIAC quarterfinals tournament. The Lakers moved on from last season as they looked forward to their 10-day Italy trip.

The trip kicked off Friday, July 21, allowing the GVSU team to visit Slovenia and Italy. The Lakers gained an opportunity to play five games against foreign teams.

The trip included first-time experiences and moments that the players and travel crew possibly won’t ever have the chance to experience again. For Head Coach Deanne Scanlon, who just started her 23rd season for GVSU, the Italy trip was a type of experience that was hard for her to describe.

“I don’t even know how to put it into words,” Scanlon said. “It was so much more than what I even thought it was going to be, and there’s just so many little moments that I think are going to help us as we go through the season.”

The Lakers began their European trip with a hectic start. They had to quickly get off the bus, race through the train station and make it to their train. In fact, it was one of the most memorable moments for sophomore middle blocker Jayci Suseland.

“When we got to the train station, we had like a minute to get through, give them our tickets and get on the train,” Suseland said. “Everyone was sprinting through the train station. It was crazy; it was a lot of fun. I think that was like one of the coolest things that happened to us.”

The team didn’t sleep for nearly 36 hours, allowing the women to spend a lot of time together outside of practices and games. The team members’ shared experiences made them grow closer.

Scanlon said when they’re going through a tough time during the season, they can reflect and remind themselves about that first day in Rome.

Junior middle blocker Staci Brower enjoyed her time experiencing a different culture, both on and off the court.

“We got to play a lot of higher-level teams, and then just the whole culture—it was different to be able to play teams who don’t really speak your language, so it was just the whole aspect of it was different,” Brower said. “The facilities weren’t as great as we were used to, so that made us very grateful.”

The 10-day Italy trip was a chance for the Lakers to be together earlier than the previous seasons had allowed. In the past, the first time the Lakers would interact was the start of the preseason. With two or three girls per room, strong bonds were made that spread across the court.

“I think that we’re going to have a really strong team, and we have very talented people and a lot of skills on the team, so I expect really good things (this season),” Suseland said.

In fact, all the starters from the 2016 season, and 13 players overall, are returning to the team this season, many being upperclassmen. The Lakers have strong leaders ahead of them. As captain, senior setter Katie Olson is making sure her teammates are performing better than they were last season. GVSU volleyball expects to see a winning season.