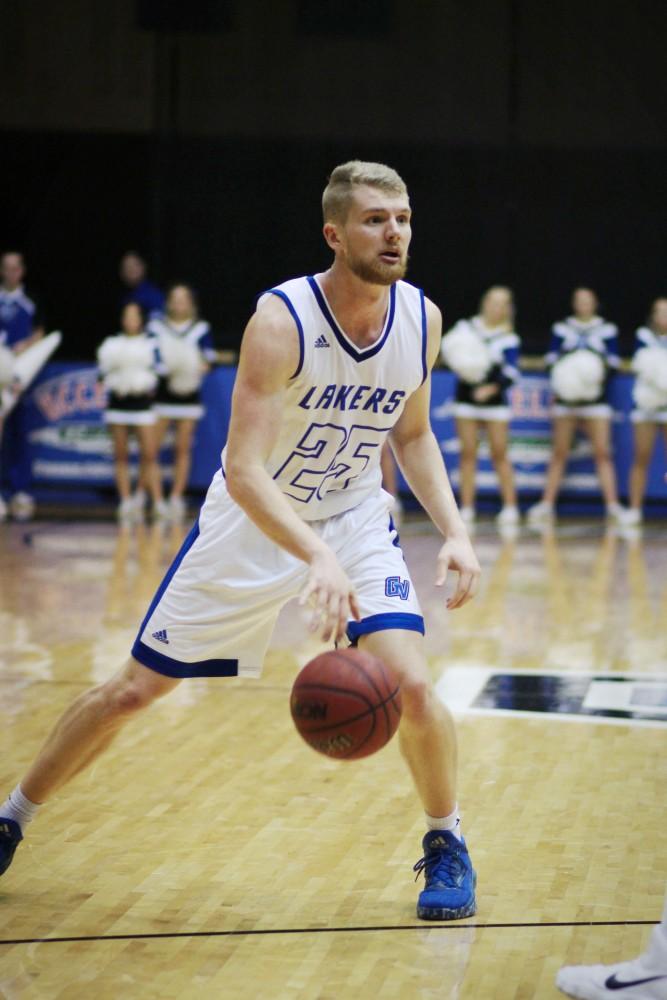 When you look around the NBA, there are a few consistent similarities that can be drawn between successful teams.

Every team that has found success has or has had their stars, including Steph Curry, James Harden and Lebron James, just to name a few. These teams also feature players that complete the team to hold everything together, including Matthew Dellavedova, Luc Mbah Moute and Joe Ingles.

For Grand Valley State men’s basketball, Ben Lubitz is their Joe Ingles. Lubitz is the player that does what needs to be done to win basketball games, though his efforts may not necessarily show up on the stat sheet.

“That actually came up in a conversation I had a few days ago with my dad,” Lubitz said. “I’m kind of the glue guy.”

When you take a look at the box scores from the GVSU men’s basketball games from this year, it seems that Lubitz is a player who is doing something different every time he steps on the court.

In games against McKendree and Purdue Northwest earlier this season, Lubitz brought a much needed long-range scoring boost to the table, scoring 40 points between those two games while also going 13-19 from the field and 10-16 from behind the three-point arc.

Then there are games like those at Ashland and Wayne State, where Lubitz came in during crucial stretches to provide support via the boards, corralling 11 rebounds, seven of which were collected on the offensive end in addition to adding 12 points on four of nine shooting between the two games.

“It’s something I definitely try to do out on the court,” Lubitz said. “I kind of relish fulfilling that role of going out there and doing what needs to be done to help my team get the win at the end of the day.”

Lubitz wasn’t always just the glue guy on a fledgling DII basketball team. He was that star player that his team leaned on when things mattered most.

As a senior at Mio AuSable High School in northeast Michigan, the six-foot-three-inch athletic combo guard averaged a commanding 35.6 points-per-game, which included a career high 57 points in a single game.

The stats and accolades did not just appear overnight for Lubitz in high school either. He was a three-time all-state selection at Mio AuSable, as well as a four-time all-North Star League selection and a two-year captain. Lubitz embodied the definition of a basketball player that put the team on his back, but at the completion of his senior year of high school, it wasn’t basketball that primarily influenced him to come to GVSU.

“My primary reason for coming to Grand Valley originally was because GV has a very prestigious nursing program,” Lubitz said. “Academics were always a very high priority when I was trying to decide where I wanted to go for college.”

The other factor that led Lubitz to become a Laker was his familiarity with the program before he was even recruited to join the GVSU men’s basketball program.

“I think it was toward the end of my senior year that Coach Bower, an assistant coach here at the time, wanted me to come down and take an unofficial visit,” Lubitz said. “I had already been to two Grand Valley basketball camps so that kind of led me to fall in love with it a bit then I came down to the campus and everything felt like it fit just right and here I am now.”