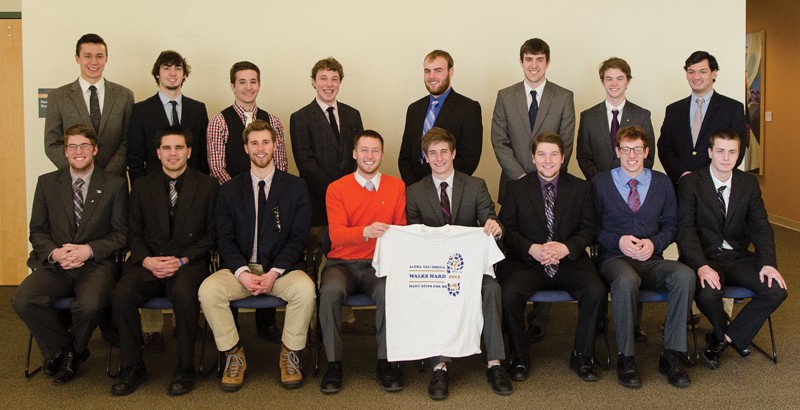 Spring Break is coming up soon at Grand Valley State University, and with it comes the decision of just how to spend those eight days. Some students are taking vacations, some are just ready for a nap — but the men of Alpha Tau Omega are taking a walk for a cause.

Starting Feb. 28, 15 members of GVSU’s ATO fraternity are going to be starting a journey in Allendale that will take them 160 miles to Traverse City – all on foot.

The group is walking to raise money and awareness for Multiple Sclerosis, which is “a chronic, often disabling disease that affects the nervous system,” according to NationalMSSociety.org.

After setting up their donations website about four weeks ago, the group has surpassed their goal of $10,000. One hundred percent of proceeds will go to the National MS Society.

The idea for the walk was inspired by a similar event that Alpha Tau Omega-Kappa Beta of Troy, Ala. held, said Tyler Dunham, GVSU’s ATO president.

“We got the idea from them, and they kind of pushed us to do it because it intrigued us right away,” Dunham said.

Dunham said ATO Secretary James Zyrek was “a big part of getting it started.”

“I heard it being tossed around that we needed a successful signature philanthropy event,” Zyrek said. “So I thought why not get the meetings going, and it turned into something way more than any of us ever expected.”

Zyrek said there’s much more to it than just setting up something to collect donations.

“You find out how many friends and family you have that are connected to MS and (they) share their stories with us,” he said.

Zyrek experienced first-hand what toll MS can take on a person in a recent hospital stay, he said.

“I had a roommate … he has MS, and he said that (when he was diagnosed) he was a younger guy with a wife, a big breadwinner, and basically the symptoms came on like a light switch,” Zyrek said. “He went from having it all to losing everything.”

Zyrek’s roommate lost his job, and his wife left him soon after his diagnosis.

“To see a guy with such a good personality who was doing so well in life be broken down that much … is pretty eye-opening,” Zyrek said. “To see that we’re doing something beyond just raising money for a cause.”

Once they got the business model in place, they faced the challenge of the logistics of the trip, Zyrek said.

“The logistics of the event were a huge consideration, as far as where we’re stopping, where we’re sleeping, how we’re going to get food,” he said. “It seems like a simple concept going in, but the preparation was just massive, especially when you’re dealing with this many guys on a 160-mile trail, much of which is in the dead of winter.”

The group chose spring break due to time constraints as well as because it would be more visible to GVSU’s student population in the middle of the semester as opposed to in the summer, Dunham said.

“We want to raise not only money but also awareness and support for MS,” Dunham said. “It’s not just about the dollars raised, it’s about the amount of people who will hear about it and … read into it, and gain an understanding for what it is and then do their own part.”

As far as donations go, the majority of what has been raised has come from acquaintances, friends and family, Zyrek said.

“That was kind of shocking, too – without any business donations, we’ve raised over $10,000,” he said. “As far as the surrounding area, the only real organization I’ve worked with is the National Multiple Sclerosis Society.”

The group will be walking on the White Pine Trail for about 90 miles of their trek, and will stick to roads with low traffic volume for the rest.

The Michigan State Police are helping them map out the safest route, Dunham said.

Their days will consist of about eight hours of walking, and they have arranged churches to stay in each night along their route, Zyrek said. There will be ATO members driving food to these destinations so the walkers have less to carry.

Walkers will be encouraged to wear layers instead of carrying clothes, Dunham said. The group is bringing clothing and outerwear in preparation for the ever-changing Michigan weather they will encounter.

The money for costs of food and supplies will mainly come out-of-pocket for the ATO members, Dunham said. The IFC also donated $1,000 to the group for costs.

The group will hold a small event to kick off their trip, with a speaker from the National MS Society as well as one from their chapter on Feb. 28, Zyrek said. They will then walk from GVSU’s campus to Comstock Park, a 17-mile hike.

The group hopes this event will become something the entire campus can be involved with in the future, Dunham said.

“We want to change the lives of as many people as we can,” he said. “Hopefully it’s something the campus can eventually be really involved with and that we can bring back and make a big event for the school as well as Greek Life.”

To learn more or for a link to donate, visit ATO Walks Hard: Many Steps for MS on Facebook or Twitter. The group will be posting throughout their walk.
[email protected]
lanthorn.com