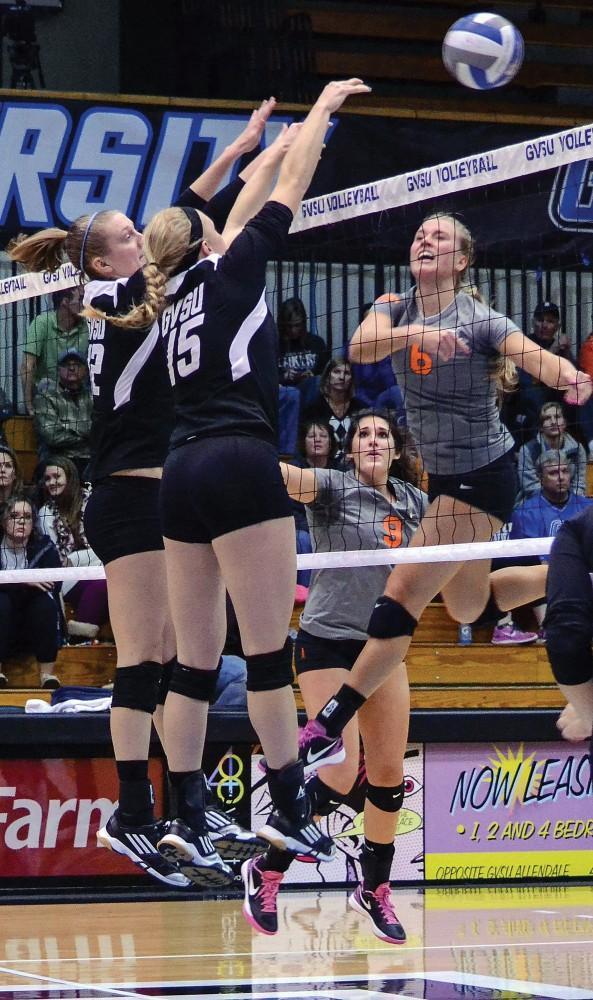 The players representing the Grand Valley State University women’s volleyball team have been all smiles on the court lately after a jubilant ascent to the top of the GLIAC.

GVSU swept both Saginaw Valley State University and Lake Superior State University at the Fieldhouse Arena over the weekend on its way to securing at least a share of the regular season championship for the first time since 2008.

“This team has its own identity,” head coach Deanne Scanlon said. “This group has that relaxed mentality before they start a match, but they are able to focus in once the whistle blows. Not every team is like that, but that’s what works for them.”

The on-court swagger has been noticeable.

GVSU (24-3, 15-1 GLIAC) has taken the conference under siege after sweeping a GLIAC opponent on 13 different occasions. It has won 22 of its last 23 games—21 consecutive sets and 14 straight matches overall.

“We don’t even think about it or talk about it,” Scanlon said. “It’s nice. It’s certainly something to reflect on at the end of the year, but we’re just coming in every single day and trying to get better. We’re enjoying the process, but we’ve really just focused in on winning that conference championship. This team deserves it.”

The Lakers got it done with defense on Friday night against SVSU.

Junior libero Christina Canepa led the charge with a match-high 16 digs as the Cardinals were held to a hitting-percentage clip of .055.

Canepa played her way into the GVSU record books in the first set by recording career dig number 1,022—the 10th most in school history. Her ability to lead the Lakers defensively has been a key aspect of the team’s success this season.

“I’m really excited to see what the future holds,” Canepa said. “Of course i have to give credit to my teammates and my coaches.”

Sophomore outside hitter Betsy Ronda led both teams with 14 kills in the victory to go with three digs and a trio of service aces, while junior setter Kaitlyn Wolters racked up 36 assists, 14 digs and four aces in the victory (25-12, 25-13, 25-20).

“We just have that confidence,” Wolters said. “We are the No. 1 team in the GLIAC. It’s been a reality, and we’re all starting to realize that.”

The Hudsonville, Mich., native has been a difference maker for the team after transferring from Grand Rapids Community College, where she won a NJCAA National Championship in 2012. Her championship mentality has brought confidence to a young team that has just two seniors on its roster.

In early October, she said the team has what it takes to win an NCAA Division II title. Wolters reiterated that statement on Saturday after the team rolled LSSU in straight sets (25-16, 25-7, 25-13).

“I still believe we have what it takes,” she said. “I’m pretty confident. My team doesn’t really like to say anything about it, but I want to get back there.”

Wolters once again posted a match-high assist total with 24 in the victory, while redshirt freshman Josie Werner garnered a match-best eight kills.

Senior right-side hitter Megan Schroeder finished with six kills after being honored before the game along with libero Alisha Laing as part of the Senior Day festivities.

GVSU is firing on all cylinders with only two matches to play in the 2013 campaign. It is guaranteed to finish with the best record in the conference if it wins one of its final two games.

The team will attempt to cap off the regular season with a 16-game winning streak this weekend when it travels to take on Northwood University on Friday at 7 p.m. and Hillsdale College on Saturday at 5 p.m.