Act II: Club hockey looks to build of off their first half season success 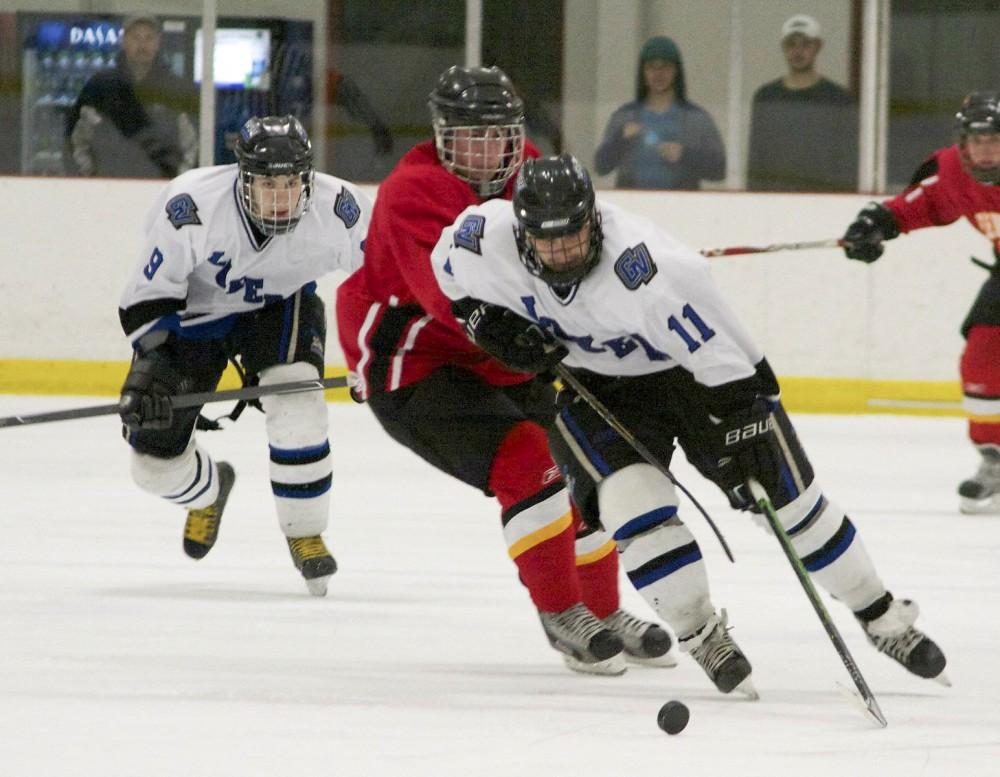 The Grand Valley State University club hockey team has plenty of work ahead before bringing another championship back to Allendale this spring.

Heading into the winter semester all the Lakers’ energy will be focused on returning to the American Collegiate Hockey Association National Tournament. The Lakers sit at No. 1 in their region with an impressive 17-2-1 overall record. Their play has been consistent with a 6-1 record at Georgetown Ice Arena and an 11-1-1 record on both away games and contests on neutral ice.

The high-scoring Lakers had a season high 10-game winning streak snapped by the Davenport University Division I squad on the last game heading into the winter break.

“We ended the semester on a high note with a win against Davenport (on Friday) and the loss was kind of a heart breaker the next night,” said captain Craig Marrett. “Where we are now is much better then what we expected heading into the season so we have high hopes considering what we accomplished in the first semester.”

The top line of senior Jeremy Christopher and sophomores Brad Wilhelm and Matt Smart are leading the Lakers offense on most nights with each player performing at above a point per game pace. Smart leads all players in points with eight goals and 21 assists in 20 games.

“We have balanced scoring,” said head Coach Mike Forbes. “Our team, I want to say, has six or seven players around a point a game. At the start of the season, I never expected us to be that deep offensively.”

The defensive work ethic within their own zone has also been a tremendous surprise for the coaching staff so far this season.

“I was a little worried about our defense as a core heading into the season,” Forbes said. “Not to say they are not good, just not what the coaching staff is used to having, In big games the defense has really stood up to compete at a very high level. We might not be the most skilled defensively, but our guys show up to the ice and play hard every game.”

Senior goaltender Scott Tiefenthal is having a strong season thus far, with a 10-2-1 record including a shutout. His 2.49 goals against average and 0.91 save percentage are some of the best numbers of his career with the Lakers.

“We have made changes in our defensive zone coverage and gotten good goaltending so far this season,” Forbes said. “That has helped us be more successful.”

The Lakers will begin the second half of their season on Friday, Jan. 11 and Saturday, Jan. 12 with back-to-back games against regional foe Southern Illinois University at Georgetown Ice Arena.

GVSU will be without defenseman Marrett, forwards Chad Wilhelm and Ian Hamilton for the first game against Southern Illionois due to disqualifications from fighting in their previous matchup against Davenport University.

“We have a huge weekend against SIU,” Marrett said. “They’re ranked third in the region. SIU has never had this high of a ranking since I’ve been here, so they have a lot of momentum coming in. We can’t say we had a good first semester and walk the rest of the way to the ACHA tournament. The hard work has to begin this weekend.”