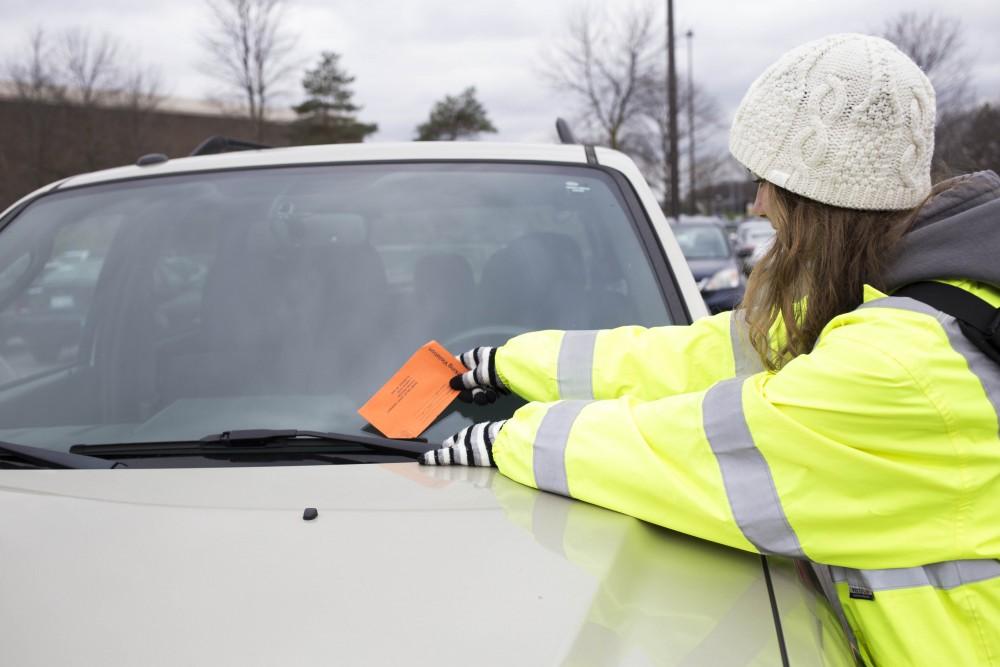 This semester, there has been an increased number of misappropriated and fraudulently used parking permits on Grand Valley State University’s campuses.

According to GVSU Parking Services, there have been 18 occurrences of inappropriately used parking permits, eight of which have been subjected to GVSU’s conduct review process. In comparison, nine violations were similarly reported to the dean of students office for the entirety of the 2015-16 academic year.

“At this point this year, we have eight (reports), which is scary because we’re almost at the point where we were at the end of the (2015-16) academic year, and it’s not even the end of the first semester,” said Michael Szydlowski, student intervention support coordinator in the dean of students office. “I guarantee we’ll have more.”

Lisa Garringer, parking services manager at GVSU, said she is concerned about this significant increase in misappropriated and misused permits.

“I’m concerned about the number of (conduct) referrals that we’re having to do,” she said. “This is not the direction we want to be moving in. (On) all of our permits, it says that duplication (is) punishable. It’s in our traffic and parking ordinance, student code of conduct. It’s everywhere.”

Garringer thinks students’ rationale for misusing permits is financial. This year, the price of a parking permit for a full-time student is $200 per semester. Temporary day passes, which used to be free, now cost $6, and citation fines have gone up.

“(The) No. 1 (excuse) a student will give is, ‘You all increased the cost of citations, and permits are so expensive, I can’t afford that,’” Szydlowski said. “Whether they believe that’s the only option they had or not, that’s terrifying. But that’s where we come in with education and explain (available options).”

Olivia Caton, parking services enforcement supervisor at GVSU, said permits are misused in a variety of ways. Some permits have dates that are changed with a pen, for example, while others might be stolen, photocopied, Photoshopped or transferred knowingly to another driver.

“All of (the permit violations) have been (committed by) students so far, and they’ve been fairly equal between photocopying a window-cling permit and also misusing a temporary paper permit,” Caton said.

Depending on the nature of the offense and the past parking record of the individual, Caton said the driver of the vehicle may be contacted to discern whether malintent was a factor. If an innocent mistake was made, the case is not referred to GVSU’s conduct review process.

“We want to contact the individuals as soon as we realize that there is a possibility of permit fraud,” Caton said. “So far (this semester), I have five instances where we have reached out to them, informed them, educated them that what they are doing is wrong, and they did not have (malicious intent).”

If, however, the offender has a past record of parking violations or the offense is severe enough, the case may immediately be referred to the conduct review process via a written referral. In some circumstances, the case may also be sent to the criminal justice system by a GVSU Police Department officer.

If a student denies the charges brought against them, the conduct review process continues with a hearing. The student then has the option to appeal the decision of the hearing officer or the hearing board, as well as the sanction determined by the conduct coordinator assigned to the case.

Depending on the nature and severity of the offense, sanctions could include a written warning, restitution, community service, or loss of parking privileges.

Garringer stressed the potential negative impact this process could have on students financially and on their futures.

“There’s the financial impact because they’re going to end up paying for something that they may have only used for a couple of weeks,” Garringer said. “I think that there’s an impact that this follows them (throughout) their college career. For students who would be criminal justice (majors), I think that would have a negative impact.”

Caton agrees it’s better for students to purchase a permit instead of risking the potential ramifications of permit misuse.

“It’s a lot easier to come in and purchase a permit than it is to go through this entire process,” Caton said. “(It’s) typically cheaper, too.”