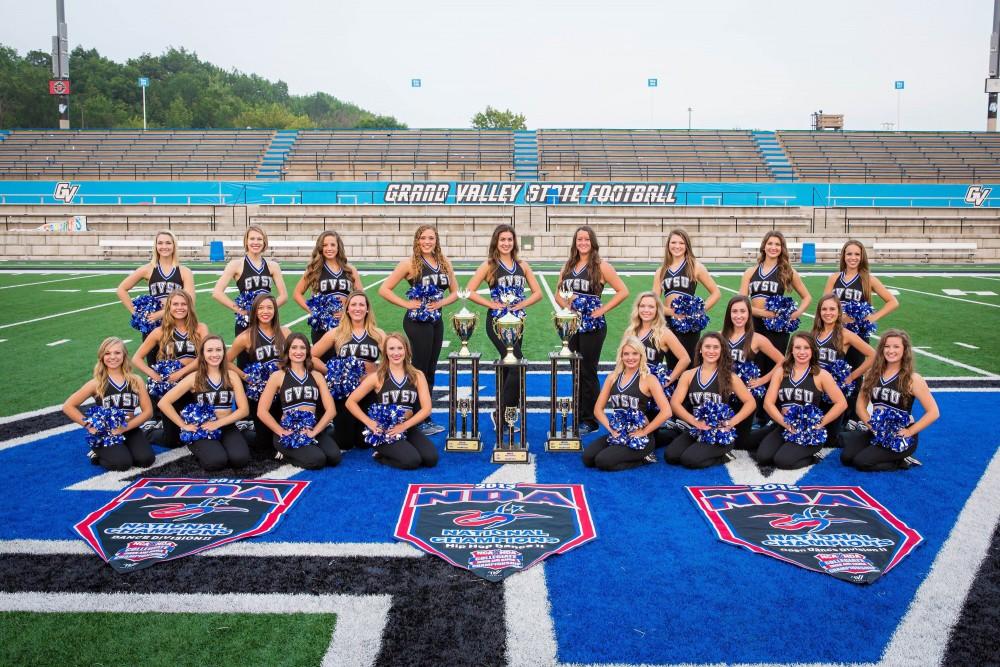 The winter 2017 semester may have ended, but the Grand Valley State University Laker Dance Team is getting started on a new season. The dance team will have tryouts for the 2017-18 season from Friday, May 19, to Sunday, May 21, on the Allendale Campus.

For Rael Orao, the coming year will be the sixth season that she has coached the team alongside Kathryn Allen-Nyenbrink. Orao said the team has only one audition per season, and auditions for 2017-18 are fast approaching.

First, those trying out will learn a dance combination consisting of jazz, pom and hip-hop. Afterward, there will be two days of callbacks, interviews and secondary eliminations, followed by a final decision on day three.

The Laker Dance Team represents GVSU in a spirited manner through cheer and dance, though during auditions students will participate in a clinic-like experience.

“There are lists of skills that the judges will look for in the audition,” said Tillie Roth, captain of the dance team. “Students should be able to do different, diverse styles of dance and to be very spirited and happy.”

Over the years, the team has ranged from 12 to 23 dancers. Since there is no specific number of dancers required, the judges will be looking for candidates with a strong foundation in dance, a potential for growth and a commitment to hard work.

Moreover, even after auditions are over, the team members will spend much of their time dancing and establishing relationships.

Every year in July, the team attends the National Dance Alliance (NDA) summer camp in Louisville, Kentucky. In April, the group of dancers travels to Daytona, Florida, where they compete in the NDA nationals.

For dancers on the team, nationals are more difficult than university or community appearances. At championships, the group does harder and longer routines to compete with other colleges and universities from around the country.

“We all work together to put our best routine out there to try and win,” Roth said.

Whether at an athletics event or a competition, the team usually has a different routine for each of their performances.

“There is usually a specific purpose for every routine we do, whether it’s working on a certain kind of performance style, incorporating a new skill or allowing dancers to explore the choreographic process,” Orao said.

With that, the dancers convey dedication to the team, and a season commitment lasts from June to April of the following year.

During the summer, the group meets once during the weekend. In the fall and winter semesters, they practice three times a week while attending other events. The team practices even more when nationals start approaching.

Despite the stress that competitions pose to the dancers, Roth said joining the team has been one of the best decisions she has made. As the coach, Orao agrees that the students on the GVSU Laker Dance Team grow and connect through their experiences.

“The relationships and memories made on this team will last far beyond their years at Grand Valley,” Orao said.

As one of more than 50 sport organizations at GVSU, the Laker Dance Team is a fun but serious way to get involved on campus.

“If you even have one little idea that you want to try out, then just do it and see what happens,” Roth said. “At auditions, be yourself and give it everything you have.”

For more information or to request an audition information packet, email the GVSU Laker Dance Team at [email protected]