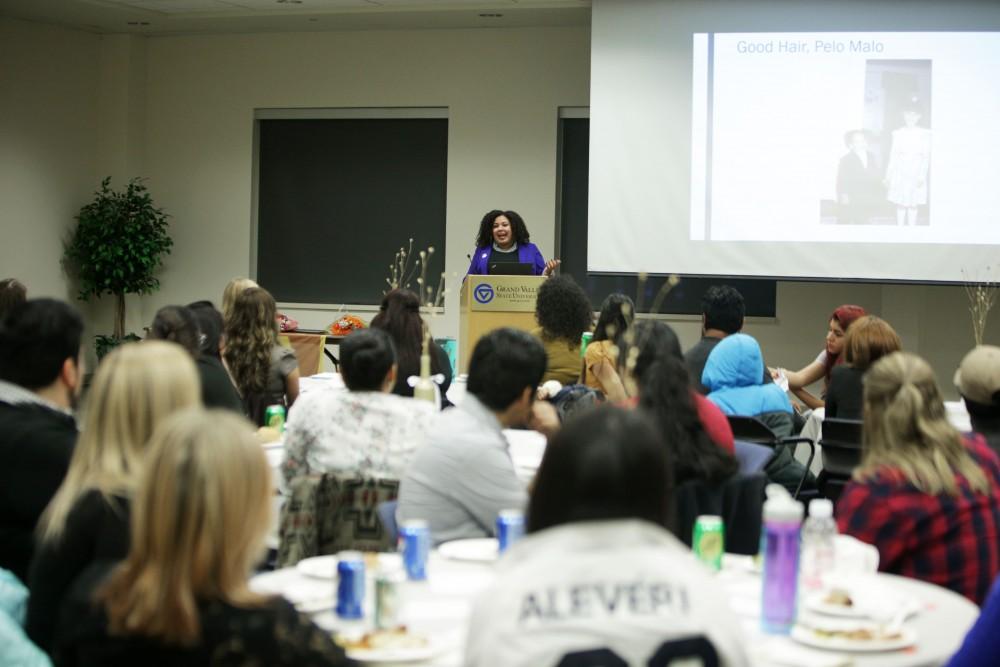 Every year, each chapter of the Delta Tau Lambda Sorority, Inc., gives out the diamond award to a Latina women to acknowledge the otherwise unrecognized things a Latina woman has done in her community. This year’s Grand Valley State University recipient was Allison Roman, assistant director of GVSU’s Women’s Center, who was honored at the ceremony Friday, Jan. 20.

Kaeleigh Poole is the only member of Delta Tau Lambda on campus and planned the event almost entirely herself. Poole said she wished to honor the tradition of Delta Tau Lambda by holding the award ceremony, while looking for more members to join the sorority. She said the recipient of the diamond award is someone who has broken barriers and come out on top shining.

“We look for a minority woman who is active in her community, who gives back, someone who’s really busy, can juggle it all, but still has a smile on her face at the end of the day,” Poole said.

Poole said the award is called the diamond award because diamonds are “made under pressure.” She said Roman is a perfect example of the meaning of the award.

“She has been under a lot of pressure, she’s been through a lot in her life and she’s rose to the top,” Poole said. “She’s shining bright. She’s very successful.”

Roman said she was surprised to win the award, but it felt “good.” She said sometimes she doesn’t realize the true impact she’s making, and this award is a good reminder.

“I work with students, and just knowing that they see, they feel the impact that I make, it’s really touching,” Roman said.

Roman was raised by mixed-race parents, but brought up in a Hispanic-centered household. During her childhood, she identified as Hispanic, but gradually over the course of her life, Roman came to realize her “blackness” and now identifies as a black Latina.

For many years, Roman said she had denied part of her black heritage to certain people. Every Sunday night when she was a child, her mother would “relax” her hair to make it straight, which reinforced the idea that straight hair meant “good hair” to her, and hair that was not straight was “bad hair.” After an episode where her hair began to fall out during the relaxation process, she decided to embrace her natural hair, which helped her to love her identity.

“Understanding my blackness has allowed me to love my hair the way it is, love my nose, love the features that make me ‘me,’” Roman said. Roman said she feels she has risen above her difficulties in her life to make an impact on other students.

“I think, just given my circumstances and (the) different things that I’ve experienced, just being able to overcome those things and still want to make a difference, that’s what is really important to me,” Roman said.

Poole said events like this give women and women of color hope and something to reach for.

“I feel a lot of people in that position feel like there’s barriers to their success, and I think that it’s crucial that we encourage people to keep striving for goals like this,” Poole said.