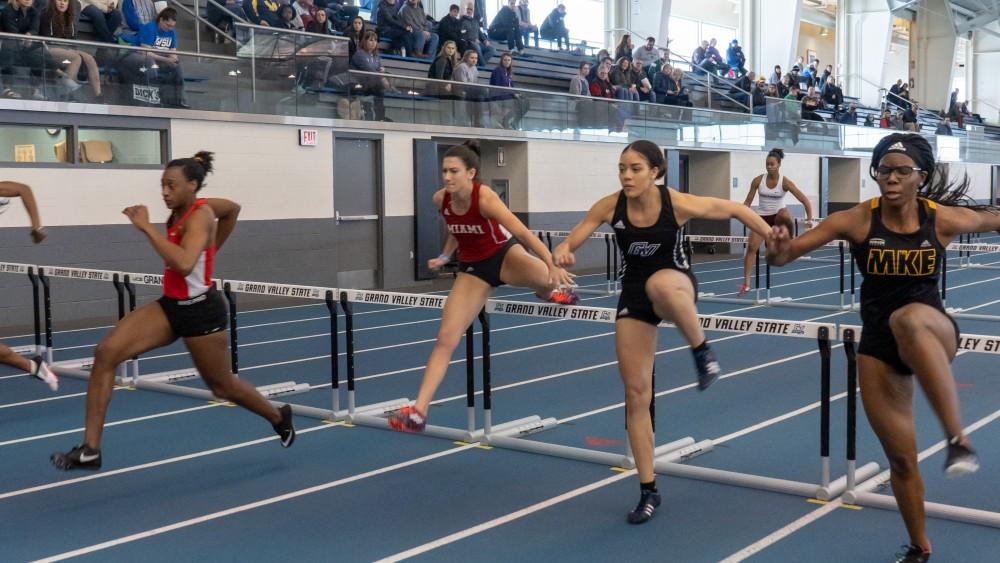 More than 30 years of GVSU indoor track and field history was re-written at the Big Meet on Friday Feb. 8 and Saturday, Feb. 9.

“To have one school record is outstanding, but to have four is amazing,” said head coach Jerry Baltes.

The track was running hot all afternoon, as three different school records were broken on Friday.

Rachael Walters finished the 600m dash in 1:28.84, breaking her own previous record of 1:31.97, set earlier this year. Walters set both the school and the Kelly Family Sports Center record with her first place finish in the event.

Thomas Capers set his second school record of the year on the men’s side, crossing the 400m finish line with a time of 47.66 seconds which broke Nathaniel Hammersmith’s (’14) previous time by almost an entire half second.

In the 3000m, Zach Panning took first place with a time of 8:01.12, shattering the previous school record held by Wuoi Mach (’16) by more than three seconds, joining Capers as one of only three male athletes with multiple entries in the record book.

The track cooled down on Friday following Panning’s new school record, but the history continued on Saturday as the women’s DMR team of Rachael Walters, Heather Johnson, Abby Crouch and Allie Ludge set a new track and Big Meet record in the event as they finished first with an NCAA automatic qualifying time of 11:27.31.

“It was a great performance,” Baltes said. “Especially considering they were running solo for nearly the entire race.”

The new record marks are a nice touch for the GVSU student athletes, but with only two weeks until the GLIAC Championships and less than one month until nationals, the main goal on the athletes’ minds this weekend was to reach NCAA qualifying marks.

“We accomplished a lot over the (two days) in terms of reaching NCAA marks,” Baltes said. “We saw a lot of good performances.”

In the field events, the women’s weight throw swept the meet on Saturday as Bobbie Goodwin took first with a distance of 19.13m. The throwing events were rounded out by Erika Lechner and Emma Richard’s throws of 14.3 and 13.67m in the shot put, earning first and second place.

In the pole vault, eight vaulters hit provisional marks, with Elli Kimes leading the way with a vault of 4.07m, earning second place.

The men’s team took home 20 different qualifying marks over the weekend, headlined by sprinter Jordan Johnson. He had two qualifying marks and two third place finishes in the 60m dash and the 200m dash with times of 6.84 and 21.64 seconds.

GVSU had two DMR teams finish in the top four. The “A-Team”, featuring Mbuta , Capers, Nick Salomon and Panning finished first, running a NCAA qualifying time of 9:47.55, while the “B-Team” of John Groendyk, Andrew McFarland, Dave Jones and Jacob Domagalski finished close behind in fourth with a time of 9:53.05.

“Both teams ran solo for large portions of the race” Baltes said. “That can be difficult, but they both still turned in pretty good performances.”

In the field events, GVSU saw four different athletes reach national provisional marks, including Justin Scavarda, who finished first in the weight throw with a distance of 18.42M. Ryan Mount also notched a first-place finish in the high jump, with a new PR of of 2.06M, matching Hunter Weeks’ NCAA qualifying jump from the day prior.

“After this meet, we will be focusing on fine tuning things at our meet next Friday,” Baltes said. “Were preparing with the GLIAC Championships on our minds.”

A total of 28 seniors will be honored Friday, Feb. 15, where both the men’s and women’s teams will be back in action at the Kelly Family Sports Center for the GVSU Tune Up Meet.