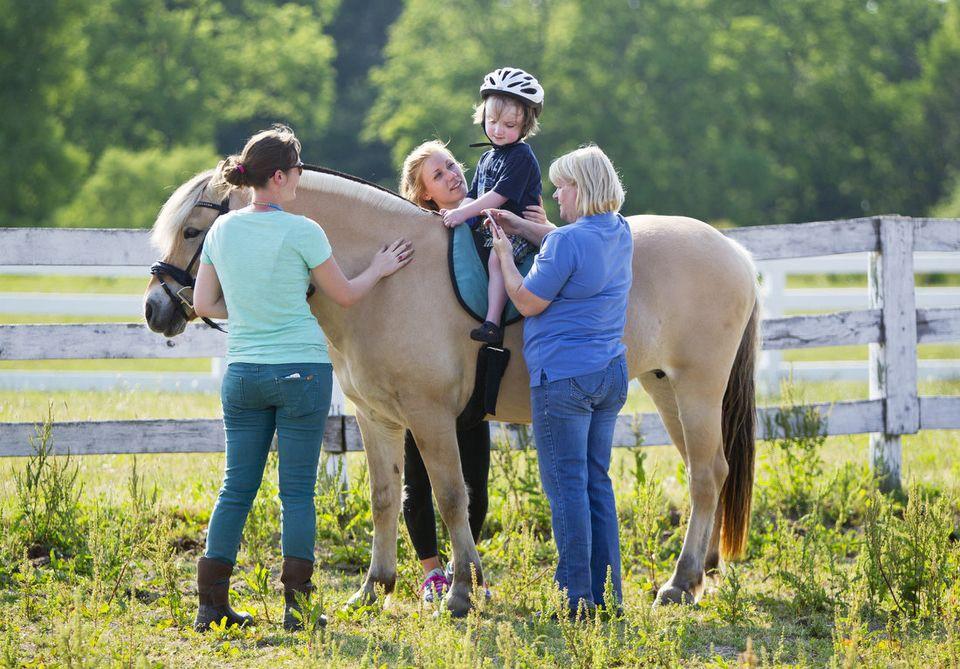 Riding a horse for many can be an exciting, adventurous experience. It’s spontaneous; fun; adrenaline-inducing; and, for those living with neurological and developmental disorders, potentially life-changing.

Equine-assisted therapy, otherwise known as hippotherapy, is a long-existing form of therapy that utilizes horses as a vehicle for facilitating improvement in the motor skills of the neurologically troubled, such as those who suffer from cerebral palsy, autism, Alzheimer’s disease, dementia, down syndrome and other ailments.

According to a study by the United Nations, up to one billion people in the world suffer from neurological disorders, with the population of the earth being seven billion.

With hippotherapy, the lives of many living with mental illness have the potential to change, according to a Grand Valley State University professor, Beth Macauley, who teaches communication sciences and disorders and has been studying and practicing hippotherapy for years.

Her work started when she was growing up on her parent’s farm. She said she always had a penchant for working with people with disabilities and claimed to have the “horse gene” from her parents. She said after she got her first riding lesson, her fate was sealed.

“I love working with people who need help,” Macauley said. “People with disabilities were always my first love.”

A horse is valuable in therapy for two main reasons, the first being the physical impact the horse has on the patient. According to Macauley, when a horse walks, the three-dimensional movement gives repetitive, systematic motor and sensory input to the person on the horse.

“The person, who has never had or received normal motor and sensory function because of their disability, is now getting it from the horse,” Macauley said.

She said the horse facilitates improved coordination, motor control and attention, which then lead to improvement in desire and intent to communicate, articulation, and even swallowing.

The second reason is the horse also gives comfort to the patient during the therapy, similar to a therapy animal. She said patients develop a bond with the horse, which also facilitates communication.

“People who have difficulty talking to other people will actually initiate communication with a horse before another person, so we use that as a building block to work on language with other people,” Macauley said.

Macauley said she’s had some patients be frightened of trying hippotherapy, but the majority of them, especially kids, have a great time with it.

“A lot of our kids, especially ones with cerebral palsy and wheelchair bound, have never experienced what it’s like to walk, much less be high on a horse,” she said.

Macauley said the biggest challenge in her work is trying to get insurance companies to recognize hippotherapy as a valid form of therapy.

She said the insurance companies may have preconceived ideas that hippotherapy is giving people “free pony rides,” which she is actively trying to disprove with more research. She is specifically working on a way to correctly “dose” a patient who needs hippotherapy to figure out how often the treatment is needed. So far into her research, she said there is evidence to support that hippotherapy is producing more positive results with patients suffering with various neurological disorders over traditional therapy.

The executive director of the American Hippotherapy Association, Jacqueline Tiley, said she encounters issues with insurance companies related to hippotherapy as well. She said the solution to this problem is continuously educating people on the benefits of hippotherapy based on research and data, especially for those with serious neurological disorders.

“We know that so much more can be accomplished in a short time on a horse because the therapists cannot create the same three-dimensional movement in the clinic as they can on a horse,” Tiley said.

Macauley teaches many speech pathology classes at GVSU and often talks about hippotherapy to her students, hoping to pass the “horse gene” onto them. Among the many things she said she teaches her students, she always tells her students to treat every patient of theirs with dignity and respect.

“I encourage my students to think outside of the box to advocate for their patients, always learning, always striving,” Macauley said.