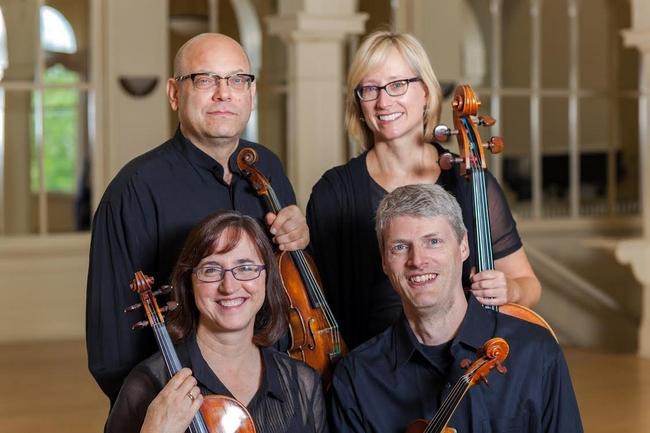 In a room of the Cook-DeWitt Center often reserved for wedding ceremonies, the latest installment in Grand Valley State University’s “Arts at Noon” series celebrated the acoustic marriage of four instruments.

“I think a lot of people who come to our shows here have never seen a string quartet,” said Eric Tanner, one of the quartet’s violinists. “They are impressed with how much sound we generate, but at the same time how intimate each voice is within the group. It’s a really fascinating balance.”

“The idea here is to just share some of the cornerstones of the repertoire,” said violinist Christopher Martin. “Haydn is kind of considered the father of the idiom of the genre. Then the Debussy, it’s the only string quartet he wrote, and it’s a nice contrast for a program of this size to have a couple of different styles.”

Along with Martin and Tanner, violist Barbara Corbato and cellist Stephanie Tanner complete the quartet. After the show, audience members congregated in the lobby to discuss the show.

“It was really valuable to see a professional string quartet perform and to see how a group that’s really sensitive to each other as ensemble members really functions,” said junior Alison Sall, a violinist and music performance major at GVSU. “I thought they were so stylistically and musically unified, which was also great. I think live performances are really special. There’s a distinctive energy that’s involved and every performance is different.”

For students like Sall who are pursuing music as a career, Tanner and Martin offered a few pieces of advice about the difficulties and rewards of the field.

“(The reward) is twofold. One is connecting with our audiences, but we (also) just love working together,” Tanner said. “It’s kind of a win-win.

“Keep practicing. You have to be relentless, disciplined, and hardworking. It’s kind of like an Olympic feat, but it’s worth it if you enjoy it.”

“It’s being part of something that’s bigger than what you can do yourself,” Martin said. “The whole is greater than the sum of its parts.”

Though the group has performed as far away as New York City, playing with the Juliard String Quartet at the Lincoln Center, Tanner discussed their close connection to West Michigan.

“Three of us perform full time in Grand Rapids, and some of us teach at area colleges and teach privately,” Tanner said. “Our hope is to keep reaching more and more audiences across the state of Michigan and to be able to expose more people to the classics of the literature.”

Members of the quartet have taught music at Hope College, Aquinas College and Grand Rapids Community College, as well as GVSU.

The quartet’s performance marks their return to GVSU’s Arts at Noon series after having performed a similar show last February. Arts at Noon runs through the fall and winter and will feature a total of 14 free concerts that are open to students and the public.

The Arts at Noon series will continue at the Cook-DeWitt Center this Wednesday, Sept. 23 with a performance by bass clarinetist Michael Lowenstern.