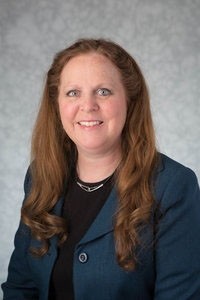 Women in leadership positions at Grand Valley State University have the opportunity to share their stories of success through the Her Story series hosted by GVSU’s Women’s Commission. The next installment of the series will be held Wednesday, Jan. 18 from 12 p.m. to 1 p.m. in the Kirkhof Center Pere Marquette Room.

Suzeanne Benet, the assistant vice president for academic affairs at GVSU, will be the featured speaker at the event. Benet was the head of the marketing department at GVSU before recently being hired to work in the Office of the Provost.

“We are very excited to have (Benet) present, to share her time and experiences at GVSU, including her transition from faculty to administration,” said Jennifer Palm, co-chair of the Women’s Commission who helped organize the event. “Her Story is a great event to learn something more about a person on campus whose name you may have heard, but you never met.”

Palm said the event backs the mission of the Women’s Commission by supporting women’s leadership.

“(It) can be very inspiring to someone early in their career,” Palm said. “It’s the chance to meet like-minded people and hear stories of women who have been successful at higher levels of the university.”

Palm said the event series has received a lot of positive feedback and requests. Many notable female faculty members at GVSU have spoken at Her Story in the past, including Lee Van Orsdel, retired dean of university libraries, and Marcia Haas, wife of GVSU President Thomas Haas.

Palm said the event helps spread a positive message of women in leadership positions and works to defeat negative stereotypes.

Palm said she was inspired by one presentation given by Melba Vélez Ortiz. Ortiz is a professor at GVSU who suffers from a rare eye disease which is slowly blinding her. Palm said she connected with Ortiz because of a neurological disorder which left Palm with several blind spots.

“Her situation is obviously very different from mine, but to be able to hear from someone who also has experienced a visual disability on campus was very powerful for me,” Palm said.

The Women’s Commission organizes several events on campus in addition to Her Story, including the Celebrating Women Awards Ceremony that honors men and women at GVSU who have impacted women’s lives.

Another event the commission holds is the Conscious Conversation series, during which participants discuss certain issues for an hour and a half. In the fall of 2016, the Women’s Commission held a conversation about family leave, and this winter, the commission members plan to hold a conversation on the Flint water crisis and the Dakota Access Pipeline called “Water is Life.” Palm said the conversation will be about the media coverage and protests of both events and will be analyzed from an “intersectional lens.”

The Women’s Commission also has a YouTube channel, where previous Her Story presentations can be viewed.