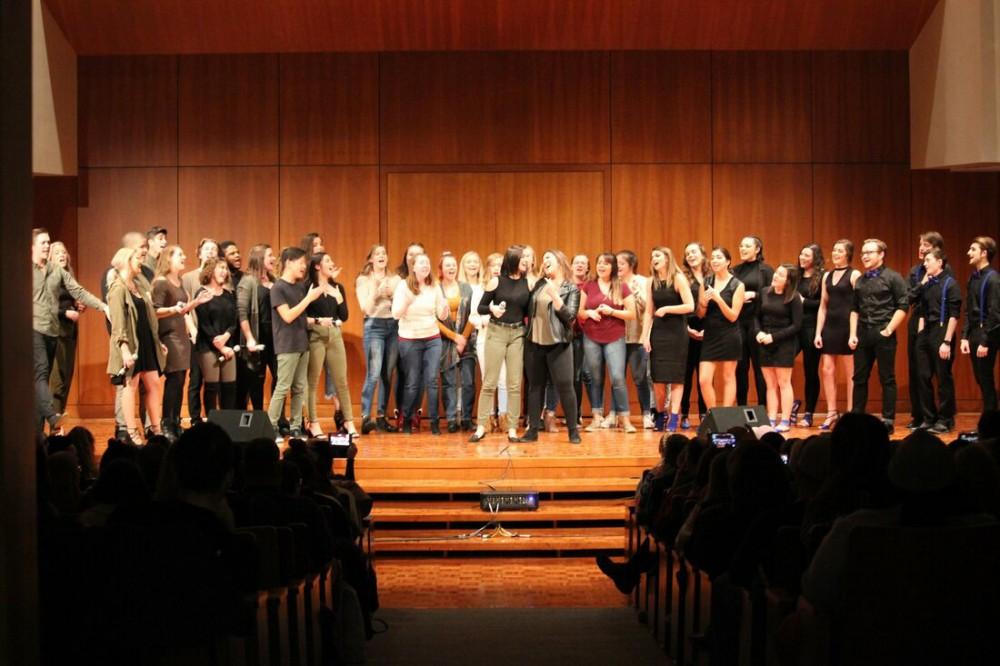 The ninth annual A Capell-Off, a competition between university a capella groups in west Michigan, was organized by Sigma Alpha Iota as a fundraiser for Allendale Public Schools’ music department. The competition, held at Allendale High School in the Ceglarek Fine Arts Center, featured Euphoria, one of Grand Valley State University’s award-winning a capella groups.

Sigma Alpha Iota is an all-female music fraternity at GVSU. The A Capell-Off is the fraternity’s biggest fundraiser of the year. In addition to the A Capell-Off, SAI actively participates in fundraising and philanthropy each semester.

The A Capell-Off was made possible by the collaboration of Euphoria and SAI, which was led by Svenja Penic. Penic is Euphoria’s music director and was the A Capell-Off Chair for SAI. Penic emphasized the amount of extra work which was put into the A Cappell-Off this year, including the addition of microphones for performers.

After all of the hard work and organization by the groups involved was done, Penic said she had hoped for “everyone who came to be happy and have fun.”

Penic represented SAI on WOOD-TV8 to promote the A Capell-Off to the Grand Rapids area, followed by Euphoria’s performance of the song “Fall in Line.”

“It was important for me to get the word out to the community and encourage people to bring their families and children,” Penic said.

Six Michigan universities participated in the event, each performing a 12-minute set.  Euphoria’s set list included “Fall in Line,” “Nature Boy” and “Ain’t it Fun.” This competition shared the same performance criteria as the International Championship of Collegiate A Cappella, which is no coincidence as Penic said the A Capell-Off is often thought of as a “practice ICCA.”

Euphoria was established in 2006 and won first place in the Great Lakes Quarterfinal at the 2016 ICCA, which the group’s media director, Joseph VanArendonk, refers to as the year the group started to compete seriously. While Euphoria will not be competing at ICCA this year, VanArendonk said they are “taking this semester to re-prioritize, make our repertoire greater and gig more.”

Penic described the group dynamic of Euphoria as “really close-knit.” She said they spend most of their time together and rehearse at least three days a week for two hours each. Euphoria currently consists of 13 members who were selected through a competitive audition at the beginning of the school year. VanArendonk said they look for people who are strong enough singers to be soloists, as each member will likely perform a solo song during their time with the group.

Penic and VanArendonk were both very pleased with the turnout of the A Capell-Off. Typically 10 groups perform at this competition, but only six teams competed this year. However, VanArendonk noticed a greater number of community members in the audience compared to past years.

VanArendonk acknowledged the appeal of the A Capell-Off to the community.

“Despite a capella being not quite mainstream yet, it’s just fun. Everyone enjoys good music, tight harmony and dynamic performance.”