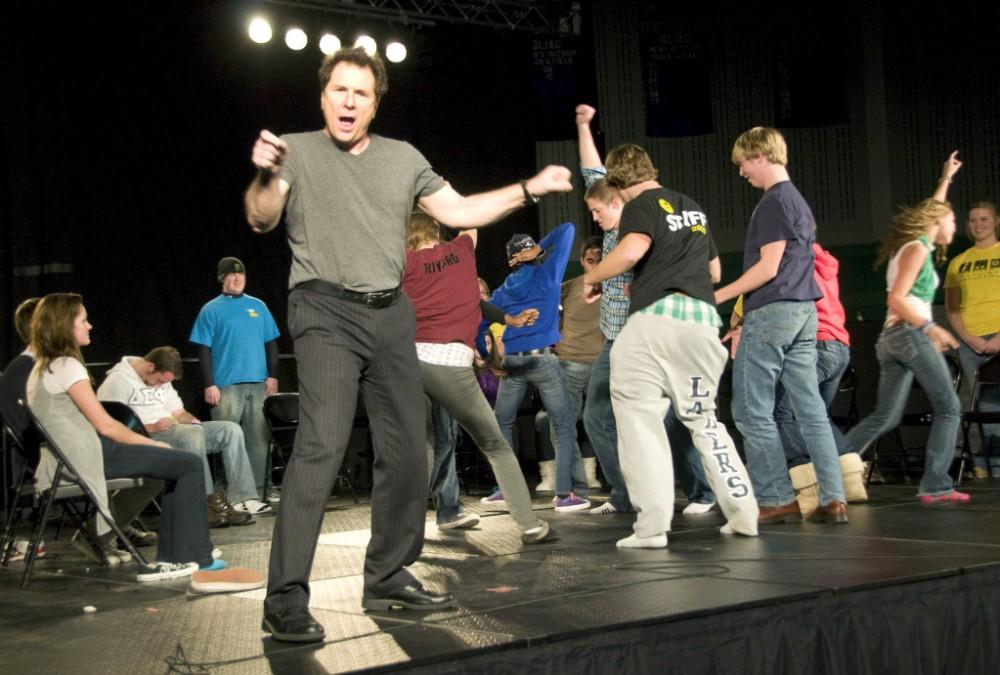 The technique hypnotist Tom DeLuca uses is reminiscent of what people might expect a hypnotist say, but there is no goofy swinging pocket watch. Instead his show relies on the willingness of people to “get their imaginations extremely active,” DeLuca said.

Monday night marked DeLuca’s 28th appearance at Grand Valley State University. He used the “power of suggestion” in front of about 500 GVSU students gathered on the floor of the Fieldhouse Arena to make the volunteers do anything he aske.

Some said the hypnotisms were all staged, and when DeLuca asked how many people saw the show last year, barely a handful of students raised their hands.

DeLuca then selected a group of audience members at random to join him on stage. Shortly after, no one had any objections to what they saw. The only audible noise was the sound of DeLuca’s voice and the rumble of laughter mixed with astonishment from the crowd.

With a few simple words he turned strangers into best friends, convinced them they could understand the feelings of fruit and had them speaking in alien languages – which they took very seriously because the fate of the world was apparently at stake. One participant was sure he was the Geico gecko and was certain he could save everyone 15 percent or more on car insurance, though probably not on motorcycles. Even the classic nightmare of being on stage in only underwear was allowed to run riot on the unsuspecting participants.

Inhibitions went out the window, and no amount of shyness appeared on the faces of participants.

Before the show, Deluca said he looked forward to getting some creative people on stage.

“The people are always different who come up on stage,” he said. “That’s what differentiates it from a kind of fun, interesting little experience into a real, amazing, kind of wow situation.”

He said coming back each year is a struggle because he is hard pressed to top the characters and responses he got previously. He said he does not care about winning over skeptics as long as they attend the show.

“As long as come, that’s all I care about,” he said. “Because they’re going to walk out of here thinking like, ‘Holy (explicative) that’s real.’”

DeLuca said a few people will step off the stage and will tell their friends they do not remember what happened. They will still think the hypnotism is fake.

DeLuca’s hypnosis worked on freshman finance major Kyle Diephuis and freshman social work student Laura Coon, both of whom had few words to describe what had happened to them.

“I don’t remember anything except for the beginning when we were counting down from 300,” Diephuis said. “I do remember voices in and out, but I couldn’t recite them.”

“I do kind of remember some things, but it was like I was sleeping,” she said. “When I woke up, I felt like I had just taken a nap.”

In reality, Diephuis and Coons’ hypnosis ended with Deluca telling them they were at the best club they had ever been at and all they wanted to do was dance like mad – which is exactly what they did.