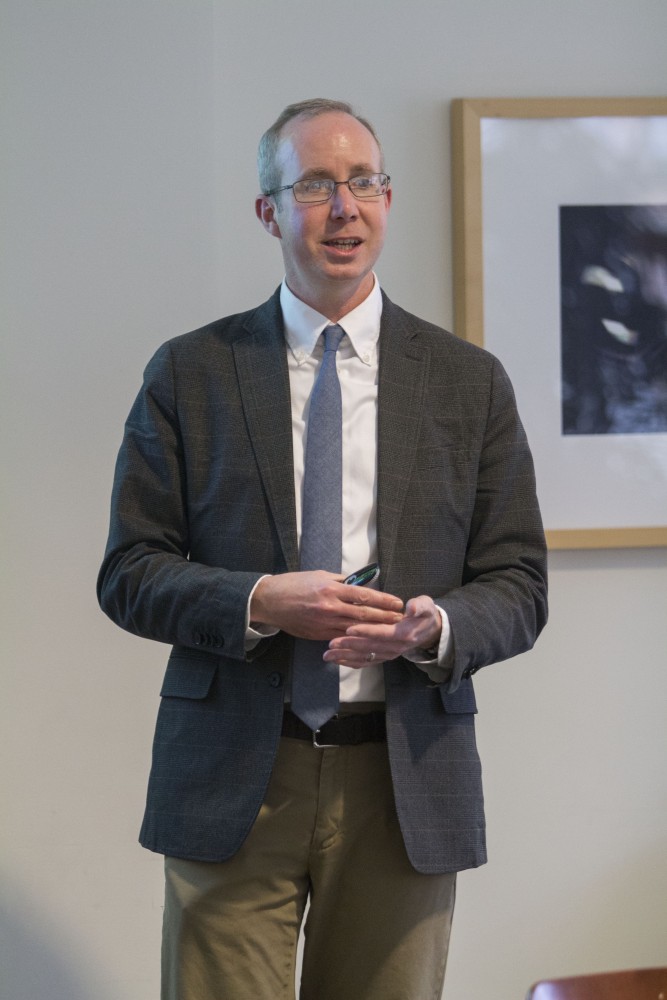 GVL/Mackenzie Bush - Dr. Erik Nordman speaks about Presidednt Trump’s climate policy and energy plan and how they will affect our local and global climate Thursday, April 13, 2017.

For the program, Nordman gave a presentation on President Donald Trump’s climate policy and energy plan with an open conversation afterward. During his discussion, Nordman focused mainly on the Clean Power Plan as a domestic policy.

His presentation gave insight on how the future of the environment and energy policy might play out during Trump’s administration.

“President Trump, both as a president and as a candidate, has made a lot of statements about environment and climate change, but there are a limited number of things that he can do because of our system of checks and balances,” Nordman said.

“The Clean Power Plan was President Obama’s attempt to reduce GHG (greenhouse gases) emission from electricity sector,” Nordman said. “Congress was not involved writing this. Just the EPA has the authority to do so on their own.”

“2005 was picked in particular because that’s when America’s carbon dioxide emissions peaked,” Nordman said. “We came down with the recession after that with a lot of people losing jobs, and a lot of factors were shuttered.”

The Environmental Protection Agency (EPA) took six years to develop the CPP, which was finalized in 2015. The day after the rule went into effect, several states sued the EPA to stop the implementation.

“The court said we are going to put this on hold while the courts review it, so it has not actually gone into effect yet,” Nordman said.

Last month, Trump came out with his new executive order on energy and the environment.

“One of the things that he said is a pretty far-reaching statement, but it instructs the EPA to review the Clean Power Plan,” Nordman said. “That’s really all it does.”

Nordman said the executive order simply instructs the EPA administrator, Scott Pruitt, to review the CPP, and then the EPA may decide to reject the CPP.

In order to repeal the CPP and put a new law in place, Trump and his administration would have to go through the same process as Obama did.

“It’s going to take a long time to undo what President Obama has done,” Nordman said. “At the end of the day, President Trump has to come up with a new rule to regulate greenhouse gases.”

“It’s still early, not even at the mark of 100 days, but President Trump has not had a major environmental policy change,” Nordman said. “There are some tweaks around the margins about various things that he does (have) some control over, but in terms of real impact at this point, it’s not there yet.”