Octubafest: A celebration of brass instruments 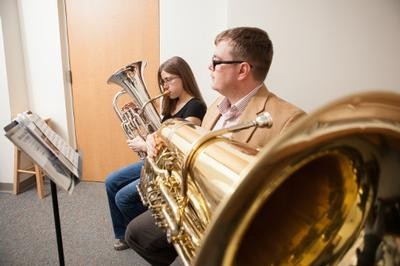 One series was on Wednesday, Oct. 17 followed by the second series on Saturday, Oct. 20. Both series of performances took place in the Sherman Van Solkema Hall.

“Tuba and euphonium students are performing, and they are joined by the collaborative piano class, who will be performing with them,” said Assistant Professor and tuba instructor, Paul Carlson, who brought the tradition to GVSU.

“The tradition was started by Harvey Phillips, the former tuba professor at Indiana University,” Carlson said. “I began teaching here in the fall of 2012 and brought the tradition with me. October 2012 was the first time that Octubafest was celebrated (at GVSU), and the tradition has continued every year since, with each year being a little different than the last.”

When asked about the evolution of Octubafest, professor Carlson said that, “Over the years, we focus on different aspects of tuba performance. We always perform solos and often have different chamber music performances that involve the tuba. It is important to note that every concert is unique and features different pieces and different performers.”

Professor Carlson addressed that Octubafest brings a lot to the table in terms of what students, both attending and performing, can learn from the event.

“Many of my first year students have not performed as a soloist in public before,” Carlson said. “It’s a new musical experience for many of them.”

Professor Carlson also brought up that is a unique learning opportunity from students performing in the event, giving them a very unique experience regarding tuba performances. “These students rarely perform solos,” Carlson said. “Octubafest puts them in the spotlight and allows them to be heard as soloists.”

He also addressed the importance of this performance to attending students, explaining that it puts tuba performers into a new light, rather than having them at the back of a performance.

“Instead of just seeing them in the back of a band or orchestra, they are getting to see what some of these instruments can do on their own,” Carlson said.

Professor Carlson encouraged students to attend future Octubafest performances. To students who are unsure if they want to attend these performances, he promises students will be surprised by what they hear.

The tradition of of Octubafest occurs every October, with each performance bringing new experiences every year. As with many of these on-campus events, admission is free and all are welcome to attend this Octubafest season.