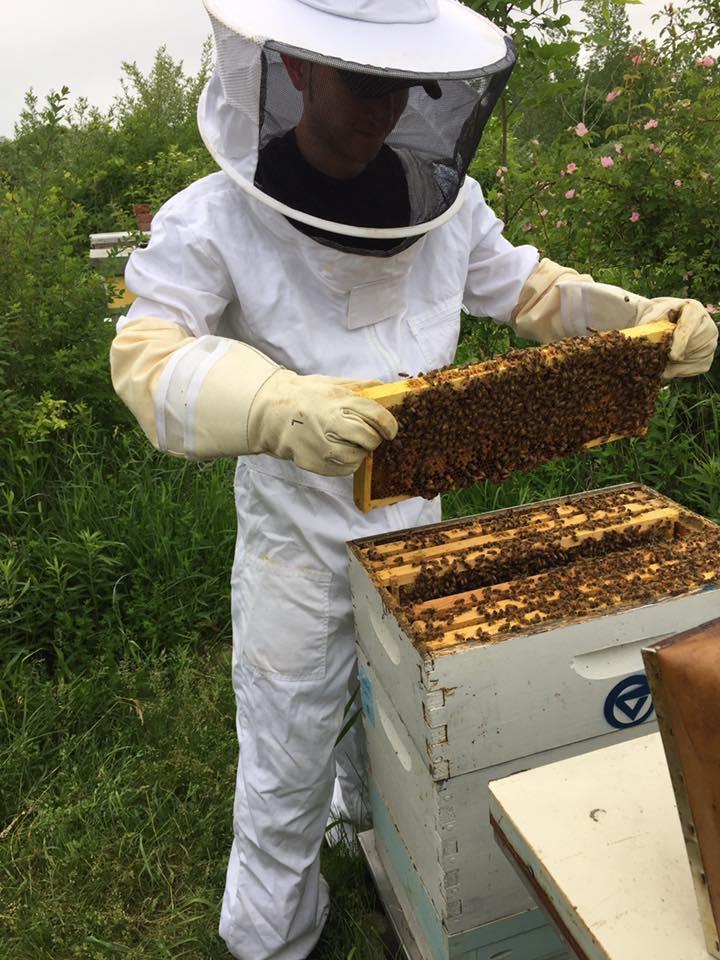 The situation of declining bee populations in the U.S. has been brought to the forefront of many ecological talks and discussions about the future of the health of the environment. Grand Valley State University’s beekeeping club recognizes the importance of bees and works to increase awareness of the bee epidemic.

The declining population of honeybees and other bee species in the U.S. has been attributed to many factors, including pesticides that interfere with the bees ability to navigate back to their hives, also known as colony collapse disorder (CCD).

Also a present danger to honeybees are the varroa mites, which are a pest to the bee and carry diseases that weakens their immune system in the process. Climate change also plays a role in the decline of the honeybee, but to a lesser extent.

Liberal studies professor AnneMarie Fauvel has been carrying the torch ever since her neighbors introduced her to the beekeeping world eight years ago.

“My neighbors started a hive, and they invited me to go in. I peeked under the cover, and I know it’s cheesy, but I fell in love,” Fauvel said. “In there, there is an entire world, everything is organized and neat and clean, and they communicate — they work together. It’s this complete world that works. To me, that’s fascinating.”

Fauvel has a degree in wildlife management and has been studying the environment and sustainability practices for more than a decade. Her focus was with food systems, which she said is closely tied to that of the honeybee. After her neighbors showed her what to do, Fauvel began keeping hives of her own, and soon brought them on campus.

“Academics have this luxury to bring their passion to work,” she said. “We had a Sustainable Agriculture Project on campus, but we didn’t have any bees. So I brought the bees on campus, started talking to students, we formed a club, and the rest is history.”

GVSU’s beekeeping club now holds two sites, one in Holland, the other in Allendale, for apiaries, a place where beehives are kept. Work on the apiaries is done solely by members of the beekeeping club with limited support from other beekeeping agencies.

“We do communicate a lot with the beekeeping world, with extraction, for example, or for queen sources,” Fauvel said. “But other beekeepers don’t come and do any of the management in our hives. The management (falls) on me primarily, but also onto the student or students that are involved in that summer.”

Summer is the most active time for Beekeeping Club, which presents a problem to the club as most students are not as active during that time as in the fall.

“It’s hard to get a lot of consistent involvement unless people are extremely dedicated,” said Emily Noordyke, risk management officer of the beekeeping club.

Fauvel said they have close to three dedicated members, that all share the title of co-president and five to 10 other members who are there, but not as often.

“We can do some education and a few other things throughout the school year but what we really need is students to take care of the bees in the summer time,” Fauvel said.

Fauvel said the beekeeping club has been able to sustain itself completely from money through fundraisers and from selling honey and lip balm made from the hives of the bees they keep.

She said they have extracted 45 gallons of honey from their hives this year, and are waiting to sell it to students in an event sometime in the fall.

“The survival of the honeybee is crucial to our food system, crucial to the diversity and nutrition of food that we get,” Fauvel said. “If you want to eat, eat enough, eat well, you need honeybees. It’s as simple as that.”

Due to a lack of data, Fauvel is unsure what the primary culprit of the losses is. Hives in the Allendale site crash more often than in Holland, and this trend has continued for two years. Corn and soybean fields can be found near the apiaries in Allendale, which may be treated with pesticides by farmers. GVSU owns the land that surrounds the Allendale apiaries, and rents that land out to local farmers.

“It’s tough because in order to get yield, they have to sometimes go with what works best, and sometimes that’s using pesticides,” Noordyke said.

Fauvel said while there isn’t much to do if the farmers are using systemic pesticides, there is room to work with the farmers if they are planting on-application.

“We could work with the farmers so that they apply at different times of the day, so for example late at night, when the bees are not going to go into it until the next morning,” she said. “We could also talk to them about when they’re doing this, because if we know that they’re doing this, we can actually close up the hives and prevent our bees from going and foraging on their sprays.”

James Dunn, an entomology and forestry professor at GVSU, said there is evidence to support that bees native to North America, such as the bumblebee, are doing a “pretty decent job” in pollinating in areas where the honeybee is limiting.

“They’re better pollinators too, by the way,” Dunn said. “They’re more effective at taking the pollen from one flower and depositing it in the right parts of another flower. Not to say honeybees can’t do that, but these native bees do a better job because of co-evolutionary reasons.”

Honeybees are a domesticated species of bee not native to the U.S., but brought over by European settlers for agricultural purposes. The primary function of honeybees in agriculture is to pollinate crops, which is an integral part of their reproductive process.

Dunn said there are some ways in which their structure in how they’ve evolved may be linked to their decline.

“Most of the times invasive species have problems, they certainly do,” he said. “They’re bred by man, they’re very narrow genetically and that’s going to cause problems.”

Dunn said planting more native vegetation in home gardens, not treated with pesticides, will help the native population of pollinators as well, which are also on the decline for similar reasons as the honeybee.

Fauvel said there are many things the average person or consumer could do to help support the honeybee, including buying local, organic food that encourages local agriculture, using less fertilizer and pesticides on lawns, and buying less food that contains corn.

She recommends avoiding processed foods because they contain corn which is treated with systemic pesticides. Fauvel also encourages people to be informed and educated about the choices they make that could impact honeybees.

“Do your part to attract pollinators, do your part to eat better,” she said. “These are all ways people can help, and it’s the people that will make the difference.”