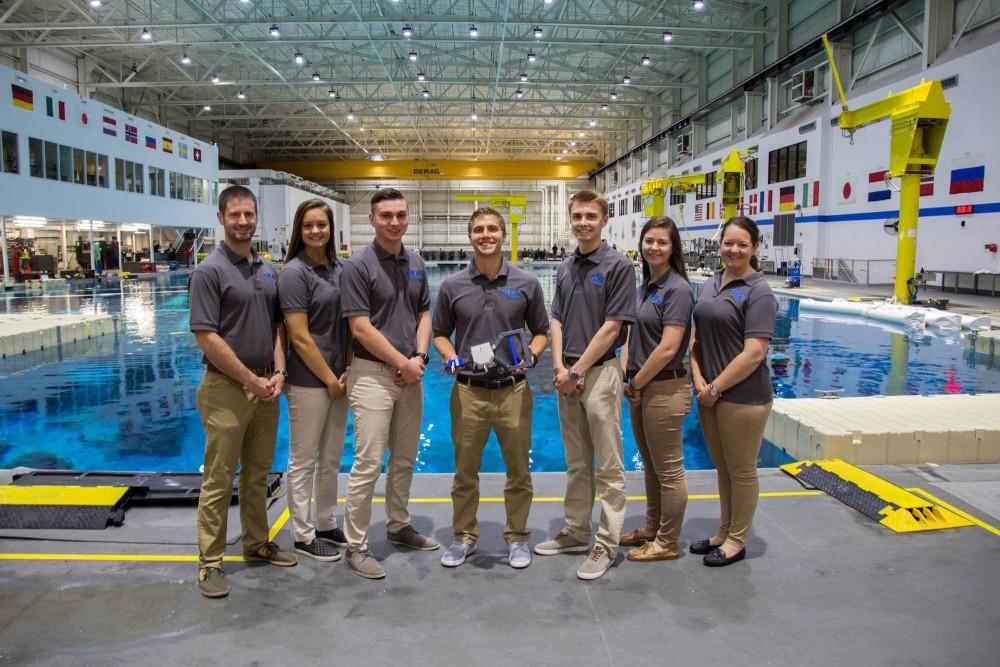 The optimistic saying “the sky’s the limit” is supposed to tell someone that their dreams and hopes are boundless, but for a group of student engineers at Grand Valley State University, their dreams have surpassed the sky and flown into outer space.

On Tuesday, May 23, for the first time in GVSU history, a group of students were able to create and test a device designed for life in outer space for the National Aeronautics and Space Administration (NASA) in Houston.

It started in October 2016 when senior Brianna Forsthoefel asked fellow senior Taylor Rieckhoff if she wanted to be a part of a team that would design and eventually test a device at NASA. Rieckhoff agreed and brought on more members, including seniors Jake Stephens and Dan Scheske. The eight-member team, including faculty advisor Amy Lenz, then entered to see if their device proposal would be approved—which it was in December 2016—and to find a way to develop it for testing. The team developed a name for themselves, “North Star,” a play on living in the north and wanting to “reach for the stars.”

The device itself is referred to by the team as a “surface sampling device.” It resembles a shovel, only without the head and with a box attached to the handle to hold the particles in. It works by pressing the button inside the handle, allowing dirt and other particles to be let inside through the opening on the bottom. Once the button is released, everything on the ground that was picked up is stored in the container unit. Stephens said the device was purposely made to be simple and user-friendly to cause less stress for astronauts in outer space. He said the device will theoretically be used on Mars to pick up particles for studying.

Every team from different colleges across the United States that came to NASA each had only 20 minutes to test their device and show how it was useful. While it’s a competition getting a device proposal approved, the competition ends once everyone reaches Houston, according to Stephens. Members of the team gave directions to a crew of divers who would test the device inside of a swimming pool to simulate the low gravity atmosphere of space.

The team ran into multiple issues with printing parts of the device using a 3-D printer. Scheske said sometimes the printer would print inconsistent parts that would not fit together correctly. It wasn’t until the team received help from Lenz to learn about tolerancing, establishing the direction of prints and using different filament layers to print the device successfully that they achieved their goal.

Rieckhoff said Lenz helped tremendously in the success of their team.

“Without our adviser, Amy, our trip down there would not have been as smooth or possible,” Rieckhoff said. “She just really rocked it out being our faculty advisor.”

Lenz said in Houston, many other faculty advisers from different teams approached her to tell them how impressed they were by team North Star’s professionalism in demonstrating their project.

“I thought that was a huge compliment and a reflection of how great and dedicated this team was and how well they represented GVSU,” Lenz said.

Lenz said she has high hopes for the future of the members of North Star in the engineering field.

“They’re the top of their classes,” Lenz said. “These students are already well-established in their engineering educational career. They have been working full time, and they’re almost ready to become full-time engineers.”

The device is currently being held with team North Star with the hope that it will be one day placed in a display case somewhere at GVSU. NASA will hold onto the blueprints of the device inside of their archive should they ever decide that it will be needed on their voyage to Mars, expected to take place in 2022.