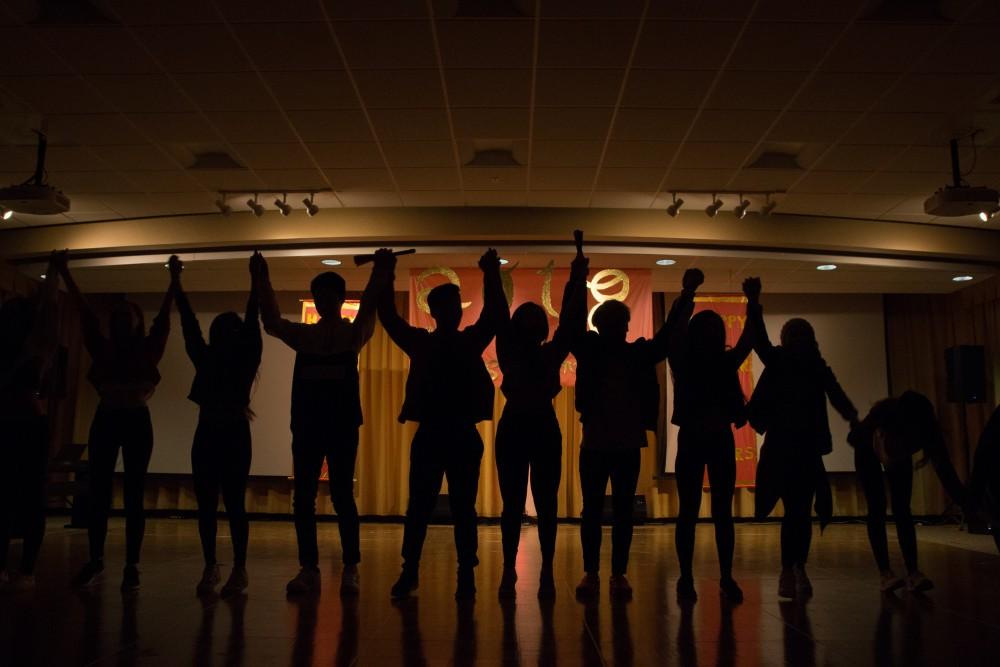 At 6 p.m., students, family members and faculty started to pour into the Kirkhof Center Grand River Room. Each visitor was given a ticket for a chance to win a raffle giveaway later in the night. Around 400 people attended, and each seat provided the visitor with a small red envelope to symbolize good luck and ward off evil spirits for the upcoming year.

The festival started off with a “lion dance” performance, where five dancers moved around the room mimicking a lion’s movements in a costume accompanied by the beating of drums, cymbals and gongs.

The performance was followed by dances choreographed by the Asian Student Union and the K-pop Group Evolution (KGE) organization to various K-pop songs.

“We started learning the dances we performed at the beginning of the semester,” said Annie Schoonmaker, the public relations officer of KGE. “It took all of the members five weeks to learn the four-song mix. It would take two to three practices three hours each for just one song.”

There was a “Minute-To-Win-It” dance competition where each competitor got the chance to show off their dancing skills to the public. The one that received the most public acclaim would win and determine the tables that would get to go get food first. Among the participants were even young children who claimed a big part of the audience’s cheer.

Typical Asian food was soon served after the first batch of prizes was awarded for the raffle, which was mostly merchandise of famous K-pop bands. Attendees lined up to get a serving of different Asian food, including wontons, miso soup, spring rolls and stir fry,

“It was fun to see the many cultural traditions and enjoy good food in good company,” said Amber Modena, a GVSU student. “The ASU did an amazing job. They obviously put a lot of work into it and it paid off.”

For the intermission, the audience got to enjoy a performance by the University of Michigan’s Revolution, a group dedicated to raising awareness of the Chinese yoyo, also known as the diabolo. The break-dancing crew “61Syx Teknique” also went under the spotlight to show off their skills.

A fashion show took place to showcase the typical Asian garments from a variety of nations and cultures, such as the Chinese qipao or the Vietnamese Áo dài.

To end the festival, guest performer A.J. Rafael took the stage. Rafael started off by singing a cover of various Disney songs and then proceeded to his original pieces, such as “We Could Happen,” which has over seven million views on YouTube. The fans sang along with the singer and sat around him after he invited the audience to come closer. Even though the festival was scheduled to end at 8 p.m., the meet and greet with Rafael prolonged the event until 10 p.m.

“I received emails and responses from the performers, audience, students and faculty saying this was one of the most memorable ANYF to date and (that) President T. Haas also came to visit,” said Casey Nguyen, one of the organizers of the festival. “We also raised about $400 for charity. I think the event was very successful.”

The preparation that went into the evening was ultimately reflected by a successful event.

“I was very stressed during the whole event, but after it was all done, I can confidently say that the event exceeded many people’s expectations,” Nguyen said.