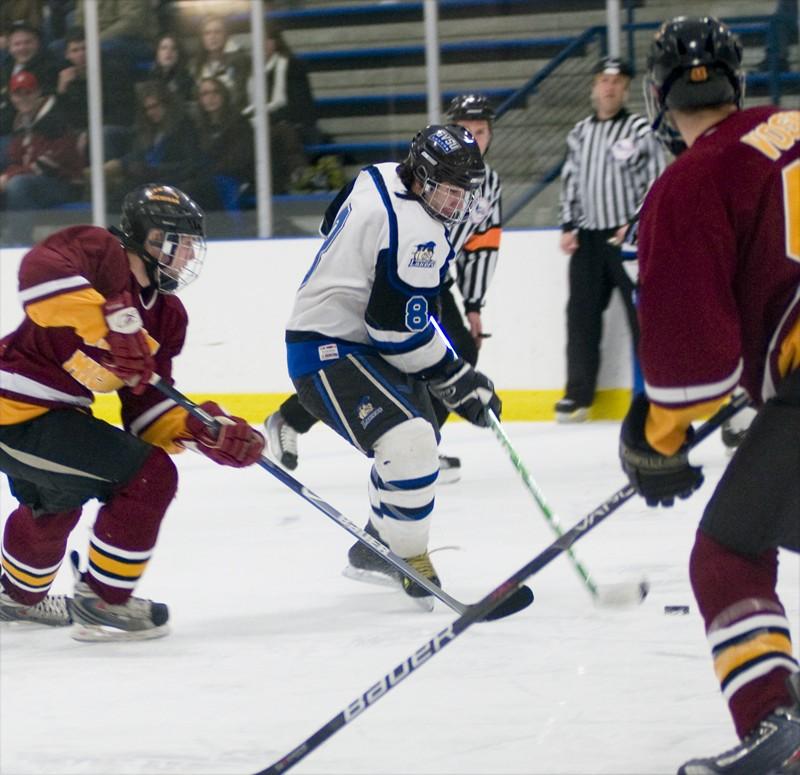 ST. LOUIS — A Compass Coach bus sat outside Georgetown Ice Arena in Allendale at 11:30 p.m. Thursday waiting to take the Grand Valley State University club hockey team on an eight-hour ride to St. Louis for the ACHA Division II Showcase, a 20-team affair where each school would play three games in three days.

Friday night’s affair was back to business for the Lakers, who have lost key members from last season’s championship squad but gained seven freshman forwards and two new goalies. Goalie Doug Chidester recorded a 16-save shutout in his Laker debut against the San Diego State University. GVSU efficiently demolished the Aztec’s empire, scoring twice in each period with goals from Brad Wilhelm, Zac Strain, Dylan Dault, Eric Beaupre, Jake Endicott and Tim Marney.

Saturday’s matchup against Colorado resulted in a 5-3 win for the Lakers after a sluggish period and a half saw Wilhelm score twice with Marney getting the game winner and Jake Vaughan also netting one on a shot from the right point. Brad Keough iced the game with an empty-netter.

The trip, one of the team’s biggest of the season, gave them a chance to bond on and off the ice, helping to build chemistry between the players.

“The best part of this trip is it’s early in the season and it gets everyone accustomed to each other,” said Ryan Welch, a fifth-year senior. “It’s a good team-building trip and you get to know the new guys a little better. I love these trips; there are no girlfriends or homework, it’s just about the team.”

The seven freshman forwards have all contributed nicely to the team. One, Endicott, had four points over the weekend.

“Getting together with everyone, watching the Tigers, watching hockey and hanging out with everyone and having a good time while having fun and playing hockey — that’s what it’s all about,” Endicott said. It’s been good as well getting to know the upperclassmen, all of their experiences — it’s just a good time.”

Fifth-year senior goalie Josh LaVigne, who recorded the win on Saturday and played about half of Sunday’s matchup before being taken off for Chidester to get playing time also enjoyed trips like these, and said he felt that they are beneficial for the team’s success.

“I think it’s fun to be with everyone and it’s a good team bonding experience,” he said. “It helps us out a lot and it’s obviously fun to get out and play different teams than what we’ve seen all year.”

Sunday brought about the same result as the other days, with the Lakers defeating Texas A&M 8-2 behind a plethora of scoring. Keough led the way with two goals while Welch, Vaughan and Endicott also found the back of the net.

On paper, the Lakers rolled through their first test of Division II opponents, a good start to a long season and the team will hope to continue that roll on Saturday against the University of Michigan-Dearborn at Georgetown Ice Arena.