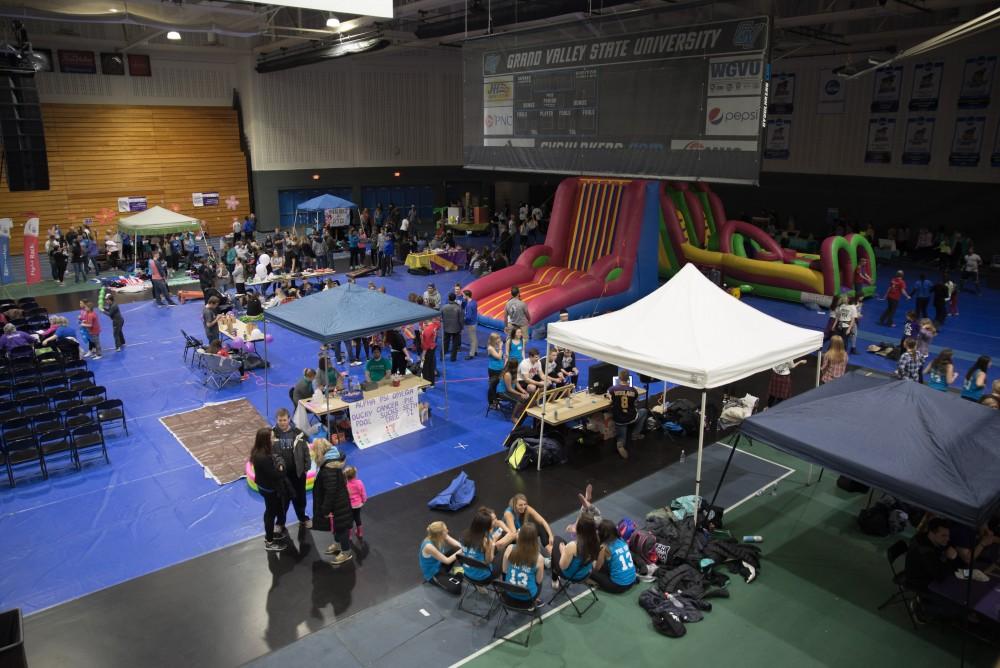 Millions of individuals are diagnosed with and battle cancer across the globe. To make a difference, more than 4 million people across 20 countries have raised awareness to fight cancer through Relay For Life.

On April 8, more than 1,040 members of the Grand Valley State University community gathered at the Fieldhouse Arena to participate in the 2016 Relay for Life fundraiser.

During Relay for Life, members of each participating team took turns walking on the indoor track for an hour at a time. The continuous walking represents the constant fight against cancer.

“Relay is so important, because not only does it bring the community together to raise awareness for the fight against cancer, but it also helps fundraise for the American Cancer Society,” said Rachael Allen, president of Colleges Against Cancer.

All of the funds from Relay for Life, acquired through fundraisers and sponsors, go toward cancer research and the American Cancer Society. Some of the larger sponsors for GVSU were Herman Miller, Meijer, Spectrum Health and 48 West.

A variety of activities were held to shake-up the walking routine, such as a cupcake eating contest, giant Twister, a hula-hooping contest and the Mr. Relay competition.

While participants were entertained throughout the event, the central message was delivered in the “Survivor’s Lap.” During this time, all cancer survivors from each team took the first lap celebrating their victory over cancer, while the remaining participants lined the track and cheered them on.

Those who have been lost to cancer, fought cancer in the past or are currently battling the disease were recognized and honored in the Luminaria ceremony. The arena was illuminated by personalized bags lit with candles and placed around the track. Each bag served as a glowing tribute to someone affected by cancer.

Malayna Hasmanis, treasurer for Colleges Against Cancer, said over $80,000 was raised at last year’s Relay for Life. The goal this year was to beat that record. So far, $61,476 has been raised, and that number is still growing.

Donations from various sponsors continued to pour in for the duration of the event. Vendors selling food, drinks and merchandise were set up around the arena to raise money.

“We set the bar higher and higher each year, but every dollar counts. It’s not one of those things where we are ever disappointed,” Hasmanis said. “It’s really cool to see students taking the time throughout the semester to raise money.”

Not only the money counts, Hasmanis said one of the significant components of Relay for Life is the awareness spread during the event. Tables are set up around the track stocked with information on different types of cancers and services available.

“Ultimately the biggest goal is spreading awareness and really educating people, because there’s so much about cancer that people don’t necessarily know,” Hasmanis said. “It’s so important to also advocate for people to get tested early and really be aware of their health.”