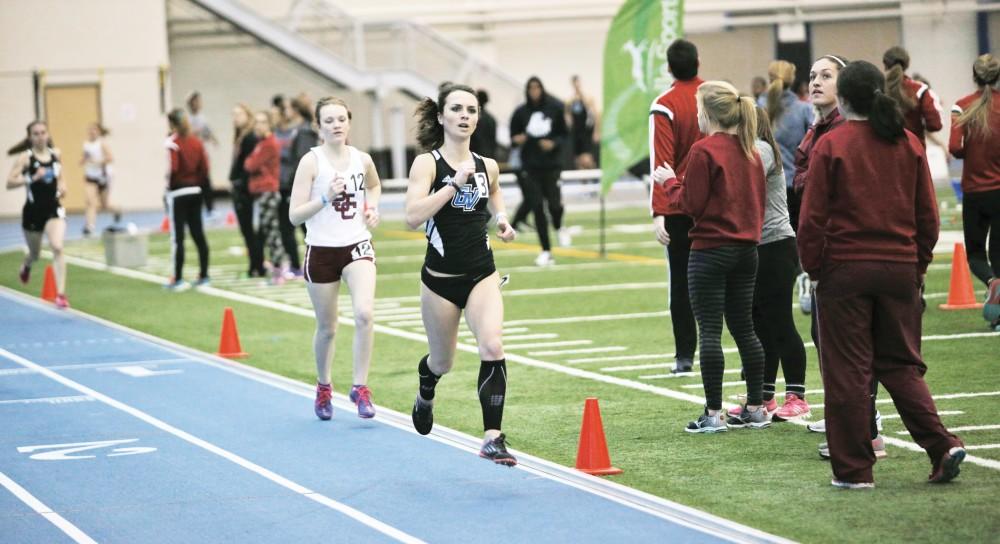 The Grand Valley State men’s and women’s cross country teams managed to begin the season with successful races under their belts at the Calvin College Knight Invitational Saturday, Sept. 9, in Grand Rapids.

The women’s team placed first in the 5K race, leaving the meet with 63 total points. For the men’s 8K race, GVSU placed second with 109 total points.

The Lakers claimed three spots in the top 10: Sophomore Theresa Mueller finished third with a time of 18:04.5, followed by freshman Megan Caltagirone who came in fourth at 18:05.1, and senior Jenna Klynstra finished in 10th at a time of 18:21.0.

“There was a solid group of us up front,” Mueller said. “For most of the race, there was about three of us, myself included, who were up front. It was kind of spread out at the very front of the race, but for a little bit, Megan and I were able to work together a little bit.”

The Lakers usually train solo for most of the summer. The women’s team has been with each other for only about a month. This first race at the Calvin College Knight Invitational was an advance in the season for the women’s side.

“You never really know how your training is going to translate into racing, so to have the opportunity early on in the season to race is good, and then it’s just a big learning experience, too,” Mueller said. “So, those of us who did have the opportunity to race, we’re racing again this Friday, so we kind of have that advantage of being able to learn from the race, what worked, what didn’t work.”

On the men’s side, they put up a strong fight against the Knights, placing three runners in the top 25. Sophomore Joe Renner finished 12th with an ending time of 25:42.4, followed by freshman Mitchell Towne who placed 14th at a time of 25:49.8. Tim Osborne finished 18th with a time of 25:57.4.

Renner felt upbeat about how his team competed in the first race after a long summer of training.

“We’ve put in a lot of work this summer, and it’s good to get on the starting line again and kind of string it all together for a race/risk,” Renner said. “Across the board, it wasn’t all great, but it was a good ‘rust buster,’ good start to the year, and I think we’re all ready to get it going again at MSU on Friday.”

For the GVSU women’s team, the race went at a slower pace than they expected. The race allowed the Lakers to evaluate their performance and make note of what to work on for the next race.

The Lakers were able to bond early on during the preseason at Camp Douglas Smith in Ludington, Michigan. GVSU spent five days in August at the camp in preparation for this first invitational. Even though the men’s cross country team is close, the camp extended the relationships among the team.

“At the start of the year, we have a preseason camp at the end of August,” Henner said. “We all just bond and go to (a) campground up north, just a bunch of dudes being dudes. Not all the team got to race this weekend, but it was nice to have them all come out and cheer us on. (It) made it easier for the guys who were racing.”