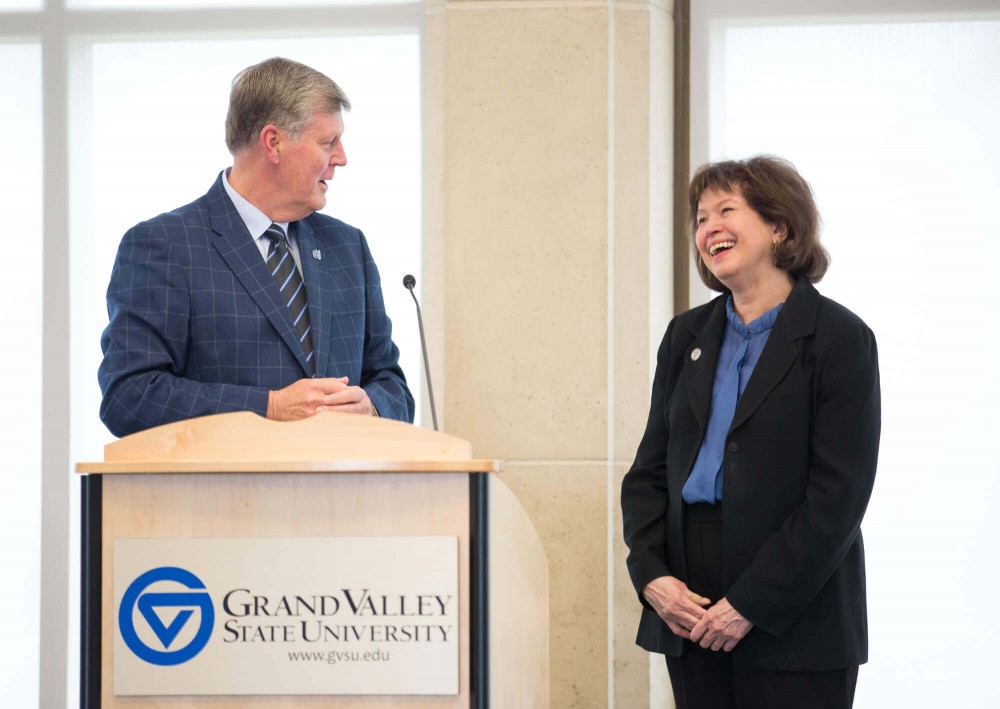 In October, Grand Valley State University announced that there will be two new awards given out to students and faculty alike in honor of former provost Gayle R. Davis.

Davis is also the former executive vice president for academic and student affairs, and though she retired from her career at GVSU in 2017, her legacy carries on.

“I’m thrilled that we had provost Davis here for 15 years of service as she was a transformational leader for our university,” Haas said. “(Davis had taken) us as the second provost into this century in a way that really benefited students’ success.”

“I’m thrilled that we’re able to recognize her because of the core business that she was able to enable for all of us,” Haas said.

The Gayle R. Davis Excellence in Leadership Award will be presented to a faculty or staff member in December, and the winner will receive $1,000. Haas stated that they are looking for someone who is “the change agent with significant impact who really understands that collaboration is an important way to get to where we need to be.”

The Gayle R. Davis First Generation College Student Emerging Leader Award will be presented to either a sophomore or junior student at the annual Student Awards Convocation in April. The qualifications for this award are nearly identical to that of the prior one, however they have been slightly modified in order to be awarded to a student rather than a faculty member.

“What we are looking for now is an emergent student leader and the first in their family to attend college and who shows promise as a future leader,” Haas said.

Haas continued by stating some of the necessary candidate criteria, saying “we’re going to say (a student with) positive impact, collaboration and has been accelerating academically with a high GPA.”

The Student Emerging Leader Award “was a very personal award for Gayle” according to Haas. He elaborated by explaining how Davis was a first generation college student, and how he was one as well.

The selection process for the Student Emerging Leader Award will go through the dean. Haas said that the dean and his colleagues make that determination “as they do with other student awards for the student convocation.”

The selection process for the Excellence in Leadership Award will be slightly different.

“(The award) will come to the President’s Cabinet and we will look at the numbers on the people who have come forward and we will select the best of the best,” Haas said.

Both of these awards are set to honor Davis and her legacy as a figurehead within the university.

“(Davis’) legacy as one of those positive change agents for the university and her role as provost in a very collaborative way has created the university as we see today,” Haas said. “The university of high stature, very keen attention to quality and excellence, the university that’s relevant. If we can recognize a student as an emerging leader and faculty and staff with leadership awards and have her name associated with it, it demonstrates our affection for Dr. Davis as well as our appreciation for those individuals who will be recognized by these two awards in keeping with who Gayle is.”