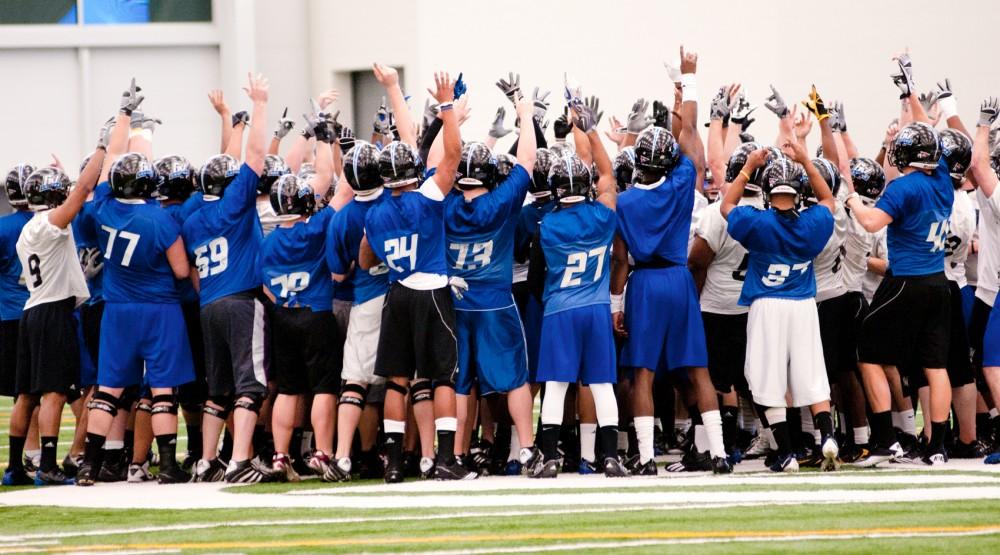 The Laker football team during the Mitch-a-palooza held in the turf building Friday night.

Weekend revelry is nothing uncommon on most campuses, but Grand Valley State University threw a different sort of party on Friday night. GVSU went old school when hundreds of fans packed the Laker Turf Building for the second annual Mitch-A-Palooza.

The first 500 fans to enter were given commemorative free t-shirts while officials passed out Krispy Kremes and vendors distributed free grocery bags. Fans cheered and danced on the big screen and partook in games while winning prizes.

And all the while, GVSU head coach Matt Mitchell calmly led his football team through its first practice of the 2011 season – at midnight.

“It’s very unique,” Mitchell said. “There’s not a whole lot of schools in Division II that can pull off what we pull off. We’re very fortunate that we have the support that we do here from our fans and especially our students.”

Mitchell spoke on the microphone several times throughout the night to thank fans, address new additions to the roster and highlight practice drills.

While the practice, which concluded around 1:30 a.m., consisted of the different units splitting up to work on drills, the atmosphere was enjoyable for players and fans.

“At Grand Valley, there’s a lot of support, and it’s a blessing to see so much support from the fans by coming out at midnight on a Friday night,” said senior wide receiver Greg Gay. “It means a lot to us, and it was a good time. We’ve been doing conditioning and working out for the last few months and really want to get back to football.”

The atmosphere of the event was fan friendly, fun and informative for everyone, said sophomore Elizabeth Smith, who had not previously attended Mitch-A-Palooza.

“I wanted to come out to support the team and see what it was all about,” Smith said. “It was a great atmosphere with a lot of people participating in different things and some awesome giveaways and free prizes from the sponsors. It was interesting to hear about some of the transfers and learn about the impact they will have on the team.”

The Lakers will look to improve in the 2011 campaign off of a disappointing second round exit in the 2010 playoffs when they fell to Augustana University.

“The guys are excited to get back out here and do some things,” Mitchell said. “Some of this wasn’t going to be super smooth tonight, and with your first practice, there will always be some bumps.