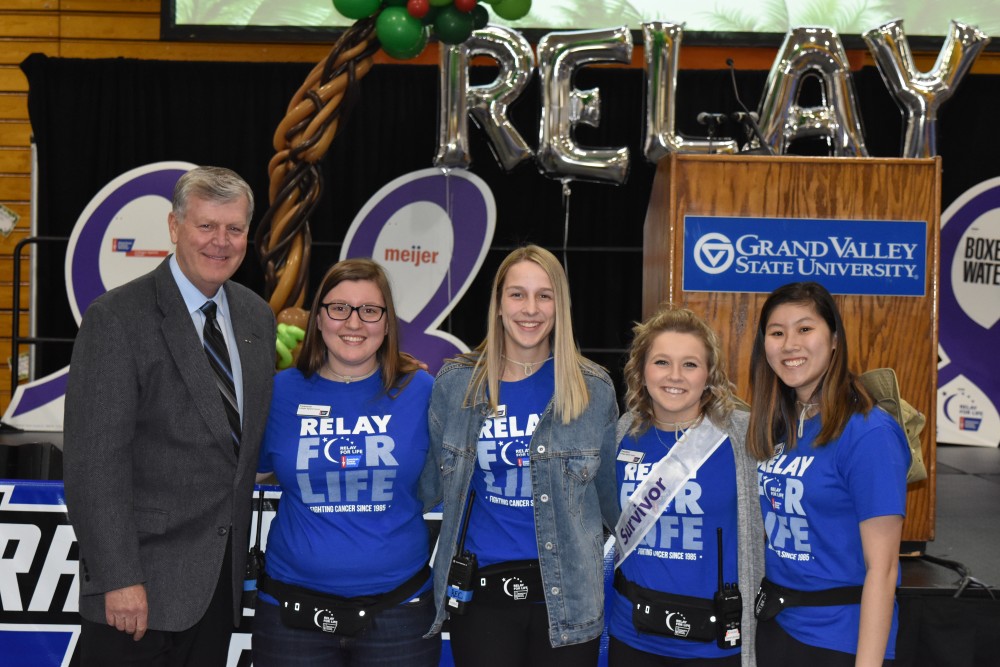 After 12 hours consisting of 43 teams walking thousands of laps, Grand Valley State University’s 2019 Relay for Life surpassed the university’s Colleges Against Cancer branch’s goal of raising $100,000. The event was held April 5 and 6 alongside 600 other colleges and high schools in order to raise money for the American Cancer Society, with the ultimate goal of finding a cure for cancer.

Between fundraising prior to the event and rolling donations during, the grand total peaked at $100,763.52 as the competition ended at 6 a.m. the following morning.

The relay kicked off with an opening ceremony featuring a speech from GVSU President Thomas Haas, a portion honoring represented survivors and a personal testament from Colleges Against Cancer Vice President Lori Bower. With watery eyes, the audience listened to Bower’s connection to cancer: her story as a caretaker for her mother, who was lost to cancer last July after battling the disease for four years.

“She is honestly the biggest reason I relay,” Bower said. “She’s the most important person to me, so I do it all for her… So, we’re trying to get rid of this disease and we’re trying to help as much as possible to relieve some of the pains that cancer survivors are going through.”

Colleges Against Cancer also named their Relayer of the Year to be AJ Warner, who not only raised over $800 for the event, but supported both his friend, Riley, and his mother through their battles with the disease.

At the event, teams not only participated in walking laps, but many sold food or played games to raise more money. Members of Alpha Sigma Tau sold walking tacos, Renaissance Club had wooden stocks for photos and Pre-Med Club sold “jungle juice,” coinciding with this year’s safari-themes motto of “Wild for a Cure.”

The event’s top team, Alpha Sigma Tau, raised over $19,000 for their sorority’s philanthropy. Greek Life teams raised a combined total of over $60,000, which made up over half of the funds raised during the relay.

Theta Chi team captain Tyler Amsbury said the fraternity has been at relay before, with this year being his third. Throughout each of his experiences, he said that the luminara bag-lighting ceremony is always touching, especially as he remembers his late grandfather this year.

“Cancer affects us all, and we’ve got 15, 20 guys out here to help support the cause by walking around,” Amsbury said. “I know that personally, I’ve been affected by cancer so it’s really nice to feel the entire support of everyone around you.”

Colleges Against Cancer was the only other team to raise over $15,000, making them a Sapphire Team. The organizing team raised over $16,000 for the cause.

The event’s top donor was Colleges Against Cancer Event Development Chair Alexandrea Trent, who surpassed her goal of $5,000 by nearly $500. Trent, who has been relaying since she was young, had her grandmother and dad on her mind throughout her relay, according to her Relay for Life profile.

While everyone was there to support a common goal, many return year after year for the community built around it. Pre-Med Club member Erika Spafford said that while it is inspiring to hear stories and rally for a cause, the people she meets at Relay for Life keep her coming back every year.

“(I love) the people,” Spafford said. “It’s just a positive atmosphere. Cancer has such a negative connotation with it, like when you hear it, you just automatically get upset. Whereas here, you meet people who are struggling through cancer or have beaten cancer and you get to see the smiles on their face. Everyone is so supportive.”

For survivors, the event had different meaning. Colleges Against Cancer President Anna Organek, a two-time survivor herself, said even helping run Relay for Life for the past four years, it’s still heartwarming seeing people fight against cancer.

“I’m a survivor, so when I was put into remission, I made a promise to myself that I was going to do everything I could to make sure anyone ever has to hear (‘you have cancer’) again,” Organek said. “When I came to college and found Colleges Against Cancer, I finally found my voice.”