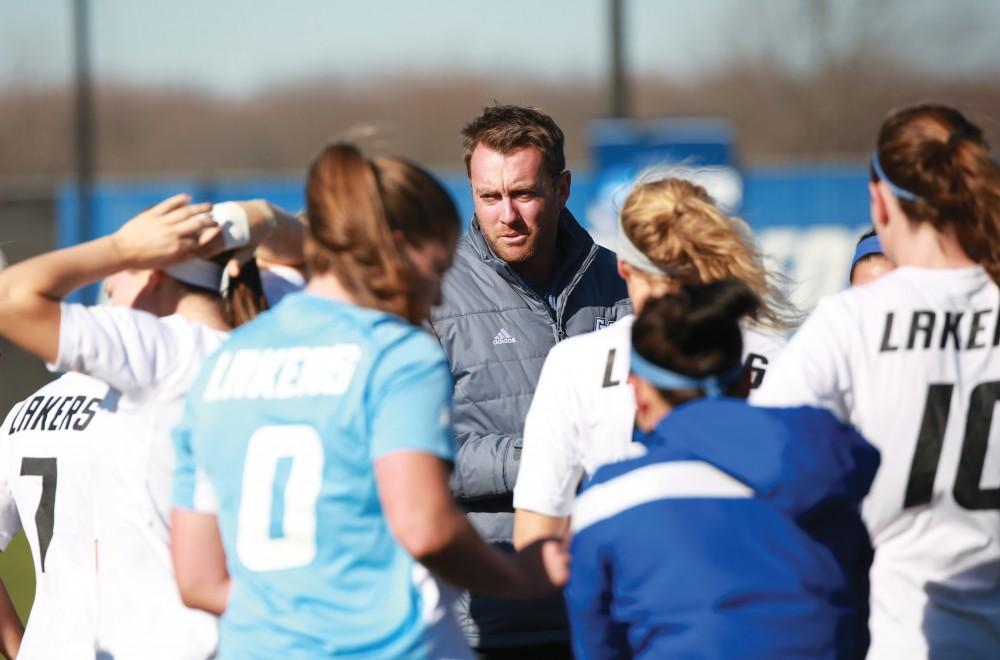 GVL / Kevin Sielaff - Head coach Jeff Hosler consults his team before the match. Grand Valley squares off against Quincy in the second round of the women's soccer NCAA tournament Nov. 15 in Allendale. The Lakers take the victory with a final score of 6-0.

The end of a college sports season brings around the beginning of a new season — the offseason. The Grand Valley State women’s soccer team has transitioned to the 2015-16 offseason after winning its third consecutive national championship in December 2015.

It has been a busy time for the team, especially the coaches. The offseason in college sports is primarily dedicated to recruiting prospective student-athletes for future seasons.

“We’ve been on the road nearly every weekend,” said GVSU coach Jeff Hosler. “Recruits have been visiting campus every week and will continue through February.”

The group of coaches travel throughout Michigan to high schools and junior camps looking for new talent to help continue the winning tradition at GVSU.

GVSU also hosts recruits for campus visits, as well as soccer camps for future prospects. These camps help the coaches gain a better sense of what kind of player each athlete is.

Most players are identified at club showcase events. High school players usually play for a club team in addition to their high school team. Clubs outside of school help these players receive recognition from college coaches.

“I ended up at a camp in the winter after one of my club showcase events and had a really positive experience,” said GVSU freshman defender Mackenzie Fox. “I ended up committing after visiting the campus and meeting the other coaches.”

Michigan, however, is not the only place to find high school women’s soccer talent. The GVSU staff will look from coast to coast to find talent to bring to Allendale. GVSU currently has six out-of-state players on its roster.

“We do look outside the state of Michigan,” said GVSU assistant coach Annette Stromberg. “I think that has shown on our roster with our Chicago kids and West Coast kids.”

What makes GVSU’s soccer recruiting intriguing is the amount of versatility within it. Most high school athletes can play multiple positions, and most also play multiple sports. This makes college coaches around the country salivate for their services.

“We recruit the best available players,” Hosler said. “Versatility is important and soccer is a game that transitions players to different positions.”

The defending national champions are losing four seniors to graduation: midfielder Katie Klunder, forwards Katie Bounds and Maddison Reynolds, and defender Katy Woolley. Those players will be hard to replace, but in the end, replacement is what drives college recruiting.

“Sometimes it depends on our team needs,” Hosler said. “But we are in a recruiting cycle three years in advance. Most of our attention is on current high school sophomores.”

Anyone can or could be recruited by a college coach at any time. A middle school soccer player might be a prodigy, and could receive a verbal scholarship offer then. There are recruiting rules and guidelines, however, which all schools and coaches must follow.