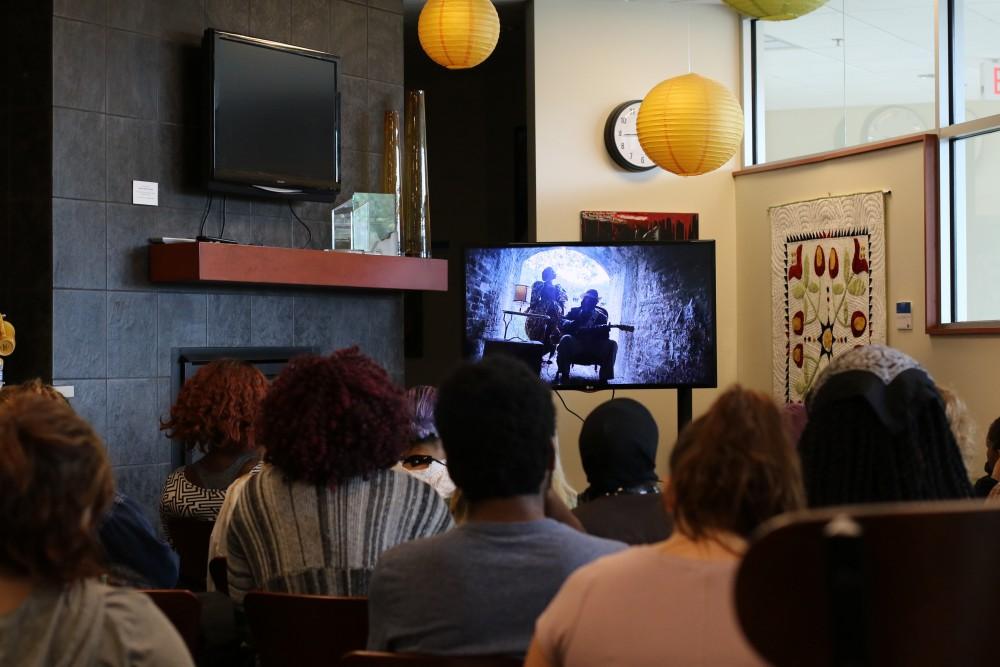 GVL/Ty Konell - Students gather for Feminist Flick Friday which took place in the Women's Center Friday, Sept. 30, 2016. The Feminist Film Friday series continued with a showing of “Between Allah & Me (and Everyone Else)” on Friday, Jan. 27, 2017.

Grand Valley State University’s Women’s Center stayed true to its feminist ideals by holding another installment of its Feminist Film Friday series with a showing of “Between Allah & Me (and Everyone Else)” Friday, Jan. 27. The showing was held in collaboration with Campus Interfaith Resources.

This monthly film series allows individuals to come together to watch a film selected by the staff at the Women’s Center and have a conversation about it afterward. The purpose of the series is to encourage exploration of different themes through media and conversation.

Jessica Jennrich, the director of the Women’s Center, said these films allow students to think about gender justice in different ways.

“Feminist Film Friday exposes students to diverse films about intersectional gender justice,” she said. “We hope that by engaging students with film we can inspire them to think about social justice from different perspectives.”

“Between Allah & Me (And Everyone Else)” is a movie about Canadian Muslim women who face challenges when they decide to start or stop wearing a hijab. The film follows the women as they experience encounters with multiple people and their opinions.

Alli Roman, the assistant director of the Women’s Center, explained that this film allows viewers to explore the stereotypes of Muslim women in Western society.

“This film allows the encountering of the stereotype in particular that Muslim women are oppressed,” Roman said. “I have a lot of Muslim women students who identify as feminist and choose to wear a hijab as their feminist statement.”

Roman also said showing these films allows for a conversation about the intersectionality between feminism and different women.

“This event allows us to show experiences (that) maybe aren’t necessarily heard,” she said. “We do things here in the Center with an intersectionality framework. That means, when we are talking about feminism or gender justice, that it’s not just the narrative of (mainstream) feminism but also the experience of Muslim women, women of color, queer women and trans women. This event provides space to show these stories through film.”

The Feminist Film Friday series has been a tradition at GVSU since November of 2015 and is open to anyone who wants to take part in the conversation. This year, the Women’s Center has decided to hold installments of the series once a month in order to keep the conversation flowing through the use of media. The topic of conversation typically flows over from Talk Back Tuesday’s event onto Friday.

“Feminist Film Friday is an idea that follows the theme of having a certain day of the week correlate with an event,” Roman said. “These events invite students into the Center and to have a conversation.”

For more information about the Women’s Center or Feminist Film Friday, visit www.gvsu.edu/women_cen/.