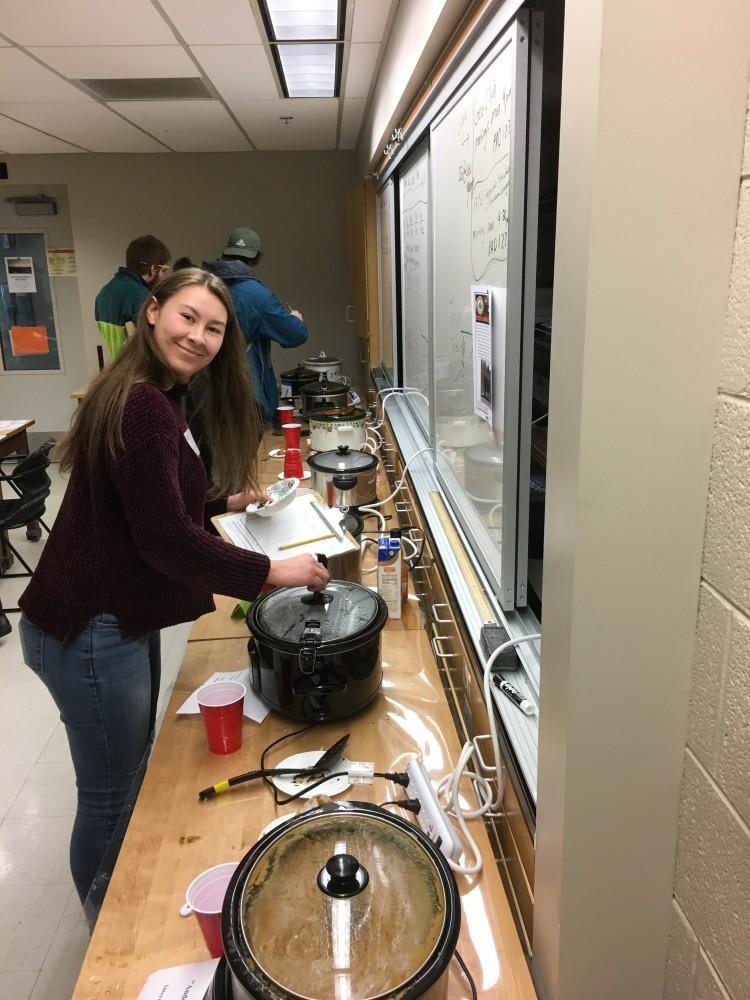 On Monday, Feb. 11, over 75 Grand Valley State University students, faculty and staff filed into the Padnos Hall of Science for the chili experience of a lifetime. For 15 years, the GVSU Geology Department has held a chili cook-off that brings students and professors together for a relaxed night of food and fun.

The chili cook-off was first created by Geology Professor and Chili Coordinator Peter Riemersma. Since its start, the event has not only grown, but become a welcome tradition. With help from Professors Janet Potgeter and Kevin Cole, Riemersma still organizes and runs the event.

“15 years ago when I started this, mostly it was a way to just get the department together with the students, and it kind of started off which just us faculty providing a lot of the chili, but then we had more students that got involved,” Riemersma said.

The chili submissions were in competition for a variety of awards including Best Overall Chili, Best Student Chili, Most Popular Chili, and Most Geological Chili. Desserts were also up for the title of Most Geological Dessert.

The chilies were evaluated by a group of 14 judges – two of which were professionals connected to Campus Dining. These judges determined the fate of each chili, except for the “Most Popular,” which was voted on by attendees. Winners were awarded chili trophies and certificates signed by President Thomas Haas. The Best Overall Chili recipe will soon be published and shared in the Geology Departments Newsletter.

More than just a competition, the annual chili cook-off serves as a familial tradition. It brings the Geology Department together, and allows students and professors to connect.

“It’s an important event, at least to the lower part of Padnos, because you can smell the chili cooking all day and that attracts people, so the chili brings people together,” said winner of Best Student Chili Jason McWhinnie.

Attendees each get a unique nametag to wear, such as “parent’s misspelled first name” or “has accidently eaten a bug while bike riding,” which sparks conversation throughout the room. Attendees also get to engage in casual networking and further develop the feeling of family within the Geology Department.

“One of the things we’ve been very successful with in the Geology Department is kind of creating this feeling of family and atmosphere of family,” Riemersma said. “There’s really nothing that kind of makes a family more than eating together. That’s what families do – they eat together.”

The event allows a different kind of interaction to occur between students and professors because there is no tests or grades, just good food and conversation.

After years of running the chili cook-off for the Geology Department, Riemersma hopes to expand the event throughout different departments. If each department works together and enters their own chili, the cook-off could be a university-wide event.