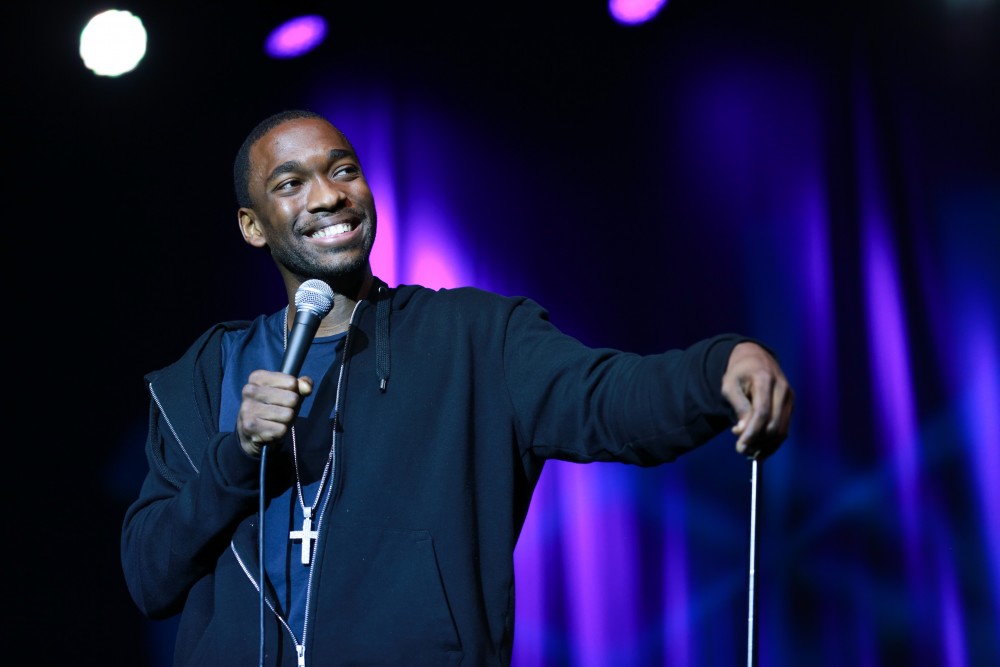 “Comedy is important for your sanity in college,” Pharoah said. “You have to laugh to get through your D’s. Or when you have a tragic thing happen, especially in college, one of your minimum sources of enjoyment is comedy.”

“I feel like college students could always use a little humor in their lives,” Lyons said. “We’re so stressed and we have so many things that we’re busy with. It’s good to relieve some stress by relaxing and laughing.”

Bryant said that she enjoys comedy because she likes making people laugh and that for her, college audiences are fun to perform for because of their enthusiasm.

“I really love that (comedy) is about making the audience laugh and letting them have a good time,” Bryant said. “I feel like college audiences are especially energetic and always down to have a good time.”

Pharoah said that when performing for college audiences, he has to be more cautious about what topics he includes in his act.

“I try to go back to my earlier type of work that is not so grown controversial,” Pharoah said. “You just want college kids to have fun. As long as you’re having fun, they’re having fun with you. When you’re doing stuff (controversial topics, offensive jokes), they won’t latch onto it.”

Different from their SNL sketches, the comedians entertained the audience Thursday night using stand-up comedy. Using impressions and stories from his life in his act, Pharoah said that for him, stand-up gives him the opportunity to be himself.

“The best part of stand-up is people seeing you as you and not as a character,” Pharoah said. “They see you for who you are and they either accept that or they don’t.”

Pharoah said he admires this sort of “fierceness” in his comedy idols like Chris Rock and Eddie Murphy, and tries to use this in his own work.

“The ability to be fierce and to tell the truth no matter how f–ked up it is,” Pharoah said. “Just take a story that you have to make people laugh. Just to be raw with it and don’t care what people think. Like, this is me, you can take it or leave it: (I admire) that mentality.”

For Bryant, the opportunity to perform stand-up gave her more freedom to improvise and have fun with the audience.

“I think in a weird way (the audience) kind of gets SNL unleashed,” Bryant said. “Where we don’t have to worry about camera cutting, or censors or time restrictions. We get to just kind of be ourselves on stage. It’s kind of looser and more fun.”

Bryant used stories from her life, audience volunteers and her observations about the world around her to put together her act. She said that she often finds inspiration for comedy in her life, middle school and middle-aged women.

Knowing she wanted to be a comedian at the age of 15, Bryant said that by the time she got to college she was focused on her career path and worked hard to succeed in the “comedy mecca” of Chicago.

“Comedy was a big part of my life in college,” Bryant said. “By day I would take theater classes, but at night I would do shows in Chicago. By the time I graduated, I had been kind of working in comedy for a couple years.”

During the time that Bryant was learning to be a comedian, she said she often performed shows for tough audiences that didn’t go very well. She said this has helped her to overcome stage fright and advises that students overcome these challenges when pursuing their passions.

“Sometimes it seems really horrible trying to do the thing that you love,” Bryant said. “But usually pushing through that tough time will get you to the good stuff. Just like doing those bad shows made me feel less scared for doing shows like (the show at GVSU): it gets you to the good stuff.”