Students present a Roman comedy with a modern face 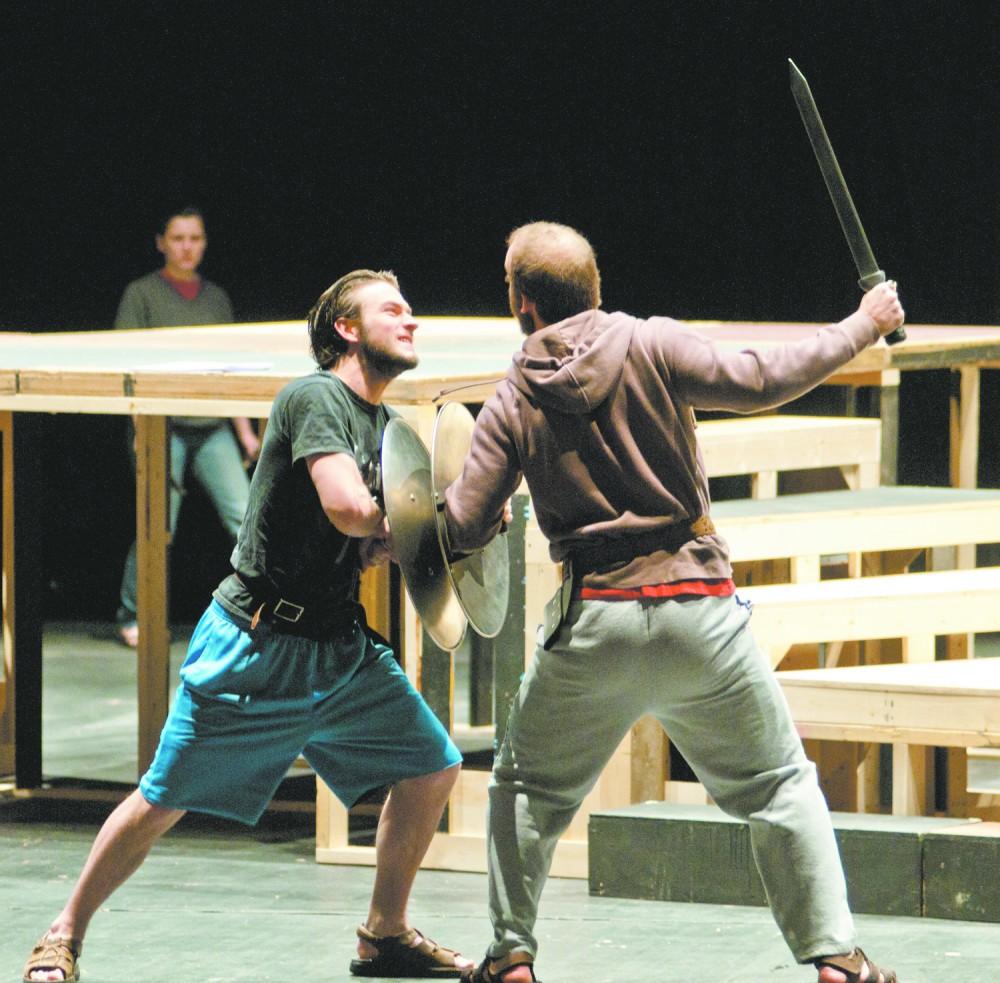 To the death!: Two actors perfect a fight scene for "Braggart Soldier," which debuts tomorrow at 7:30 p.m. The play is a modern translation of an ancient Roman comedy.

Before the Colosseum opened in 80 A.D., and the Roman people went to cheer on slaves as they brutally hacked each other up, they loved to go see witty rom-coms at the local playhouse. “Braggart Soldier,” written by the famous playwright Plautus, was one such play.

Production on the play began in mid-February and starting April 1, Grand Valley State University Theatre will perform the piece as translated by Erich Segal.

Segal, who wrote the screenplay for The Beatles’ 1968 film Yellow Submarine, adapted ‘Braggart Soldier’ the same year in his book “Roman Laughter: The Comedy of Plautus.”

Hannah Nicholson, senior theater major and stage manager, said the play will be – a very modern adaptation. Unlike some Shakespearian productions of the past, Nicholson said the dialogue uses everyday language, far from its Latin origins.

“The plot line is very simplistic,” he said. “And the jokes are still very relevant. The actors have all picked up on their characters really well.”

The play tells the story of a vain and cocksure soldier who believes himself to be the toast of the town. The soldier captures a young woman and holds her against her will; lucky for her, the foolhardy soldier employs a slave who owes allegiance to her true lover. With the help of a tricky old man, a plot is devised against the arrogant soldier and hilarity ensues.

Director Benjamin Cole, a communications professor at GVSU, said this play is likely one of the oldest the program has done, but in this translation, it’s the physical, slap-stick comedy and Segal’s heightened sense of language that stands out.

“It’s very much like a cartoon in that we have such a broad physical comedy combined with such an intelligent script of characters playing tricks on each other, that following the tradition of comedy has a intelligent mix of both,” Cole said.

Cole said he thinks if you like Bugs Bunny, you’ll enjoy the play.

For actor Joe Cox, who will play Palaestrio, the best part of the production so far is seeing what his fellow cast members have done with their characterization.

“Memorization is the easiest part,” he said. “We’ve had some confusion on how to pronounce the names, but everything seems to be coming along nicely.”

Box Office manager for the Louis Armstrong Theater Jack Lane said he expects to sell more that 1,600 tickets for the show.

“Generally speaking, comedies do sell better than more serious dramas,” he said. “The biggest impact on sales is name recognition, but recognizable productions are also far more expensive to produce due to the rights and royalties.”