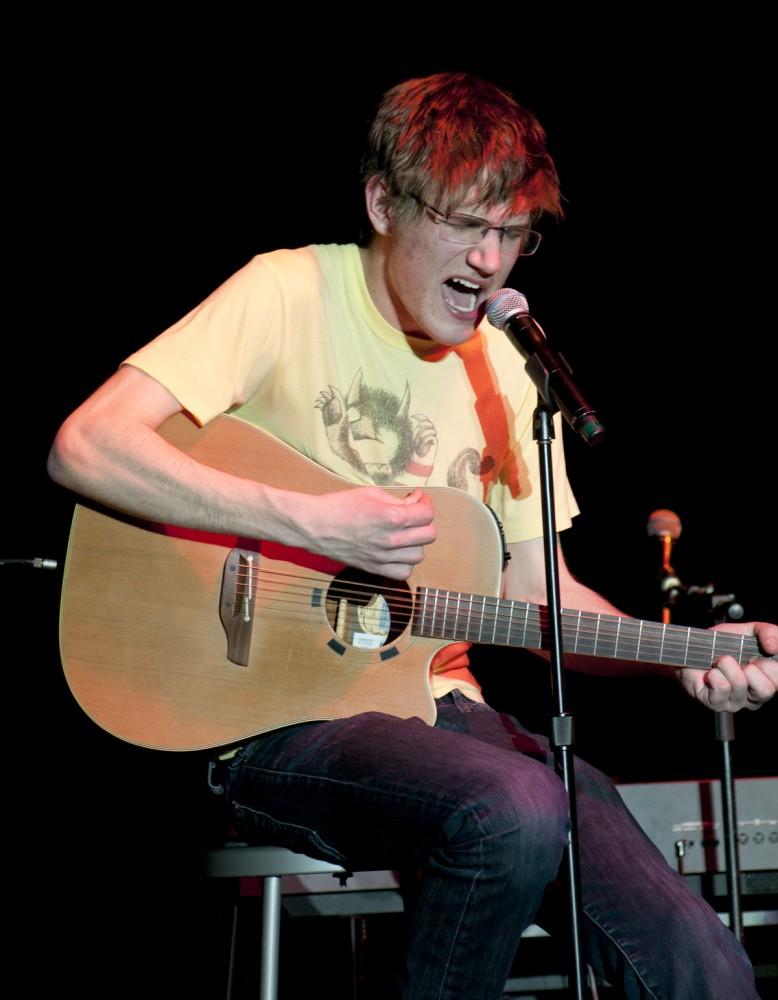 Bo Burnham preforms at his show on Friday.

As soon as doors opened, more than 4,000 fans who had been waiting in what seemed to be a never-ending line rushed into the Grand Valley State University Fieldhouse Arena in hopes of getting the best seats possible.

Although doors did not open until 8 p.m., some dedicated fans started waiting in line for their seats as early as 9 a.m.

Once Burnham energetically got on stage, the crowd went wild as they applauded and cheered him on.

Some fans wore Bo Burnham shirts while others yelled out to him, “I love you Bo!” Burnham repeatedly thanked the audience for the support and referred to GVSU as “a beautiful school,” despite poking fun at university mascot Louie the Laker by comparing him to a Popeye character.

“Bo seems to be a very conceited guy on stage, but almost in a sarcastic way,” said warm-up comedian Greg Monahan, a senior. “I think it’s because he knows that it’s funny.”

Although Burnham typically does not have any opening acts for his programs, he made an exception for the GVSU show. After watching a comedy video of Monahan, a Last Laker Standing finalist for the past four years, Burnham agreed to let Monahan be the warm-up comedian for the night.

Monahan said he had never performed in front of such a big crowd.

“I don’t think the show could have gone any better,” he added. “I was freaking out on stage and I kept thinking, ‘Wow, this is actually happening right now.’”

Burnham talked to a few audience members during the show by asking their names and inviting one fan up to the stage.

“He was a great performer,” said Tanisha Kuykendall, a freshman Spotlight member. “Even when things got messed up, he kept on going and made it funny, so no one really noticed.”

After performing some of his old and new acts, Burnham finished off the night with “Nerds,” a popular tour exclusive, which led to a standing ovation from the audience.

“We had several requests last year for Bo to come to Grand Valley, so we just called his agency, got a price and booked him in January,” said senior Alyson Greenwell, comedy and speaker chair for Spotlight Productions. “We were fortunate because Jason Derulo was such a huge success, so that is why we were able to make the tickets for Bo free.”

Although fans lined up 12 hours to grab the best seats for Burnham’s show, Greenwell said the comedian most likely will not make another appearance at GVSU for awhile.

“We definitely like to bring a diverse selection of comedians, music shows and other types of events to Grand Valley,” Greenwell said. “If we do have Bo come back, it probably won’t be for a couple more years.”