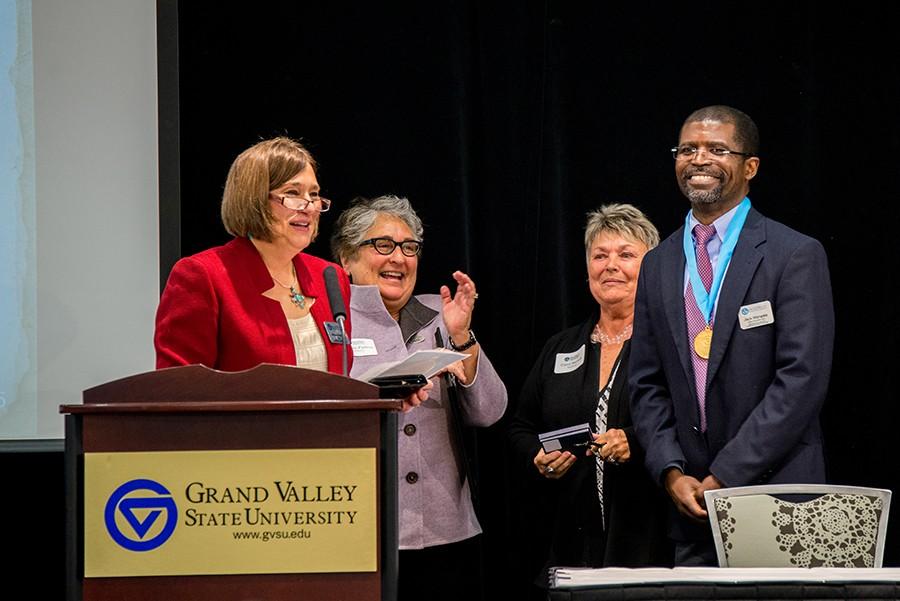 In an award ceremony on Nov. 19, Jack Mangala was appointed the second Padnos/Sarosik Endowed Professorship of Civil Discourse at Grand Valley State University. He follows Lisa Perhamus, an education professor, who started the position in January 2013 and will hold it until Dec. 31.

Mangala, a professor of African studies and political science, has been teaching at GVSU for 13 years. He said the Brooks College of Interdisciplinary Studies and the College of Liberal Arts and Sciences chose him for the position.

“My academic training is truly interdisciplinary,” he said. “I am humbled and thankful for the opportunity to engage students and the community on the practice of civil discourse around a question — immigration — I deeply care about as a scholar and citizen.”

As a civil discourse professor, Mangala is responsible for two projects: creating a fall symposium and planning a new course. The symposium, called “Welcoming communities: Immigrant and Refugee Integration,” aims to bring people together for respectful and civil discussions on sensitive and complex issues.

“The symposium’s overarching objective will be to bring together all stakeholders and partners involved in the ‘Welcoming Michigan Movement’- local officials, schools, community-based organizations, civic and religious leaders, immigrant and refugee organizations, students- to engage in dialogue and share strategies and experiences on how best to integrate immigrants and refugees and build welcoming communities for all, immigrants and non-immigrants alike,” Mangala said.

In addition to the public event, students attending GVSU in fall 2016 will also have the opportunity to take IDS 350: “Immigration: Think Global/Act Local” course, which uses a grassroots approach to the subject.

“Students are challenged to think critically about the processes and issues driving international migration – globalization, poverty, conflicts, human rights and the environment,” Mangala said. “A core emphasis of the course, and an area of experiential learning for students, will be on grassroots initiatives and local efforts aimed at building welcoming cities and communities for immigrants and refugees. The overarching objective of the course is to enable students to develop the skills and intellectual assets needed to engage in civil discourse on the defining issue of immigration.”

Besides fulfilling a general education requirement, the course will also coincide with the current refugee and immigration discourse in today’s society.

“Over the past decades, a growing number of new immigrants — including myself — have settled in West Michigan,” he said. “This has an economic, social and cultural impact on the community.”

Mangala added that “engaging in civil discourse is absolutely critical” for college students because they will be future leaders. Having these types of discussions allows them to exercise their democratic rights as citizens of this country.

Overall, Mangala hopes that students who take his class will gain knowledge of the factors behind global migration, commit to civil discourse and find ways to work with local organizations that want to create welcoming communities for immigrants of all backgrounds and origins.

Anne Hiskes, dean of the Brooks College of Interdisciplinary Studies, worked with Shelley Padnos and Carol Sarosik in 2013 to structure the civil discourse program. As the advisory board leader, she helped review the applicants’ proposals and ultimately chose Mangala as the endowed professor for 2016-2017.

“The advisory board was very enthusiastic about professor Mangala’s choice of the important and timely topic of refugees and immigration and by his experience in this area,” Hiskes said. “Being selected as the Padnos/Sarosik Endowed Professor of Civil Discourse is a recognition of the individual’s skills as an effective teacher and of their creativity and innovation in imagining a potentially transformative course and symposium that will advance respectful dialogue around a socially important issue. The award shows great respect for the professor’s ability to make a difference in students’ lives and in the community through education.”

The applicants were evaluated based on several criteria: teaching experience, teaching excellence, relevance of topic chosen, the course’s engagement with students and potential for the symposium to impact a wider public.

Perhamu’s class on Detroit revitalization and Mangala’s IDS 350 are just the beginning, Hiskes said. In the future, they plan to add more civil discourse classes.

“We believe that skills of promoting respectful and informative dialogue around crucial social and political issues will be of value for GVSU graduates,” she said.

For more information about civil discourse at GVSU, visit www.gvsu.edu/civildiscourse.